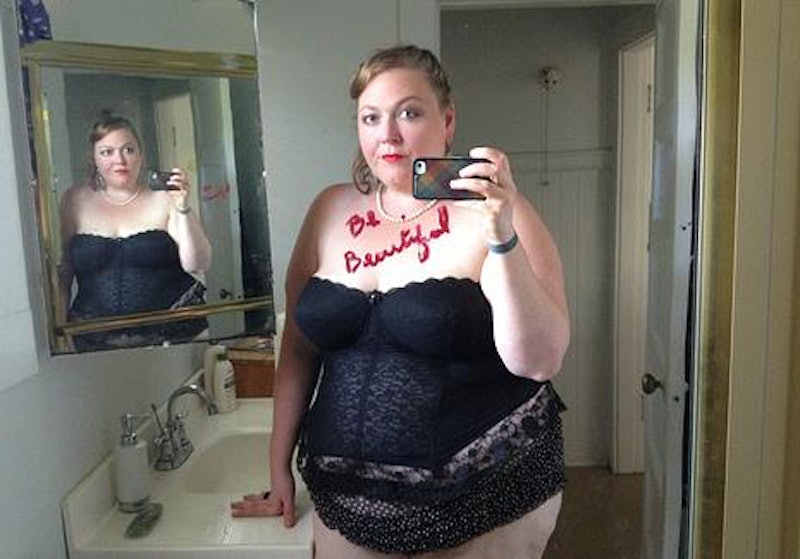 Body image activist and incredibly articulate person Denise Jolly wants you to stop body-shaming yourself. And you should really listen to her, because she’s a powerhouse lady. The self-described “large bodied, feminine presenting, queer woman” is doing a bunch of amazing work that expounds on the political power of women celebrating their bodies. For her most recent project, she posed nude in the streets of Williamsburg and looked amazing.

For this photo, 34-year-old Jolly teamed up with the people at Shameless Photography to recreate the famous Steven Meisel photo of Madonna hitchhiking. You know, the one from Sex, Madonna's infamous book of erotica that made everyone collectively flip out in 1992. Framed by the Williamsburg bridge, with Industrial Brooklyn as her backdrop, Jolly posed on the avenue wearing nothing but a pair of shoes and a vintage velvet handbag. In an interview with Huffington Post, she discusses her choice to recreate that specific image:

“The image was so unapologetic that 22 years later, it still lives in the forefront of my memory. But I kept asking myself, who am I to be so bold as to not only get naked for a photo shoot in public but also share that photograph with the world? But the counter question came immediately, "Who am I NOT to share a gorgeous and artistic photo of me standing boldly and unapologetically in my body with the world?”

Preach, sister soul! Beyond this endeavor, Jolly is responsible for a host of work that expands the super-important discourse of calling out popular standards of the ideal female body. This year, she also launched the “Be Beautiful” project. For 30 days, Jolly took photos of her body with the phrase “Be Beautiful” somewhere in the frame. Many of the photos are taken un her underwear-- some in public, and some on her home. The aim of the project was to critique the ideology that there is one immutable kind of beautiful female body. Specifically, that the slender bodies prioritized by the entertainment and fashion industries are the only attractive versions of the female form.

Jolly finds these standards driven by nothing more than socialization. Furthermore, the effect of these criteria fosters a feeling of shame and fights self-acceptance. The notion that people who don’t satisfy the mainstream “attractive” body ideals aren’t desirable or deserving of love is totally damaging. Beyond that, it’s based on something completely socially-constructed and arbitrary!

Her project iilluminates the power that women can gather from really recognizing the beauty of their own bodies just as they are. In celebrating out bodies, we can redefine these reductive beauty standards one person at a time. Jolly tells Buzzfeed about the aim of her work in the Be Beautiful project:

“Our cultures socialization involving all those identities is steeped in shame, self hatred, invisibility and destruction. It is a social construct that I now know to be completely invalid and problematic… Everything that I do in my life is about interrupting that fallacy within myself and the world around me"

To learn more about Denise, check out her website! Also, you can support her "Be Beautiful" project.