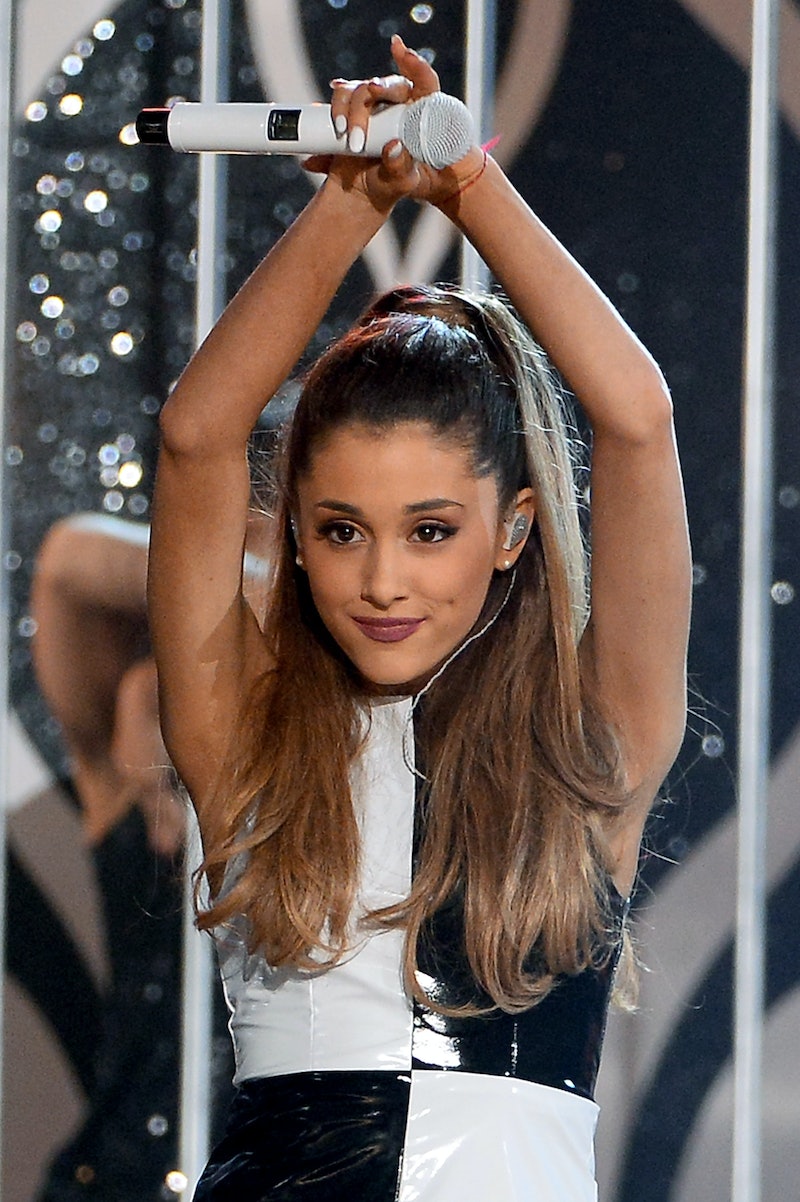 It's no secret that Ariana Grande is making a name for herself in Hollywood, going from Nickelodeon stardom to a serious pop music star. Another aspect of her career that I simply can't get enough of? All her changing hairstyles. Grande's hair is flawless and seems to easily take on any situation (please tell me your hair product secrets!). In addition to always being perfectly styled, lately her hair is being taken to new lengths and heights it's never seen before. It seems that Grande's motto for her hair these days is the bigger the better, and I'm loving every inch of it. Although it's safe to say her two signature hairstyles now include the high voluminous ponytail as well as the half-up, half-down 'do, she has experimented with a handful of other styles in her past.

When looking back over the years, it appears that the growing height of Grande's hair correlates exactly with the rise of her career. Grande's early red carpet days were full of shorter and sleeker red locks, but gradually her hair got longer and more voluminous as the years went on and her career started blowing up. Yes, I know her hair isn't just growing at rapid speeds on its own and that she admits that most of her hair is actually fake, but that doesn't mean it's any less fabulous. Grande's career and her hair have been taken to new heights — these 11 hairstyles show just how her luscious locks grew even more luscious with her rise to

Fresh off play Charlotte in 13 on Broadway, Grande's hair was a vibrant, eye-catching red, but it's clear it was missing the major volume we've come to know and love.

At Variety's Power of Youth Event in December 2009 — around the time she started filming Victorious — she began sporting a half-up hairstyle with a little bit of volume, but this was still a toned down version of today's signature style.

She rocked a longer straight hairstyle at the 2010 MTV Movie Awards — still waiting on those daring new heights, though!

Grande's ponytail look was spot on when she arrived at Variety's Power of Youth Event in October 2010, but it was definitely a lower and less voluminous version of what she rocks today. That just-enough-of-a-smile though — some things never change.

At the Twilight Saga Eclipse Premiere at the Nokia Theater in Los Angeles in June 2010, her ponytail may appear to be identical to the one above, but upon careful observation you can see that it's actually slightly higher than before.

The ponytail became more of a signature look for Grande and also grew in length and volume as she graced the orange carpet at Nickelodeon's 24th Annual Kids' Choice Awards in April 2011.

The ponytail look on the red carpet begins to become a signature, getting higher and higher each time she steps out. At the TeenNick HALO Awards in October 2011 her hair reached its highest height to date.

The ponytail makes another appearance at Nickelodeon's Kids Choice Awards in 2012 and this time it's beginning to get closer to the height and volume of the look she constantly dons today.

With Victorious coming to an end in 2012, Grande started focusing on her music almost exclusively — and edging towards her now-signature half up style. At KIIS FM's 2012 Jingle Ball, she also began adding more volume with big, loose curls.

Last year at Y100's Jingle Ball 2013 in Miami, Grande's ponytail reached new heights, probably due to the amazing success of her first album, Yours Truly, which debuted in the Billboard Top 200.

With her addicting single playing on repeat in people's heads (including my own), it's no surprise that the height of her career and hair is the highest it has ever been — not to mention completely enviable. She rocked her signature hair to perform the hit, "Problem" at the 2014 Billboard Music Awards in Las Vegas in May. With her career still steadily on an upward path — Grande's next album is set to drop later this summer — I can't wait to see how much bigger and better her hair gets with every success.

More like this
The Secret To Taylor Swift’s Fringe, According To The Experts
By Orla Pentelow
Kim Kardashian Chopped Her Platinum Hair Into A Lob
By Olivia Rose Ferreiro
Regé-Jean Page On The Art Of Power Napping
By Paris Giles
The “Botticelli Bob” Is The Chicest Summer Style For Short Hair
By Audrey Noble
Get Even More From Bustle — Sign Up For The Newsletter