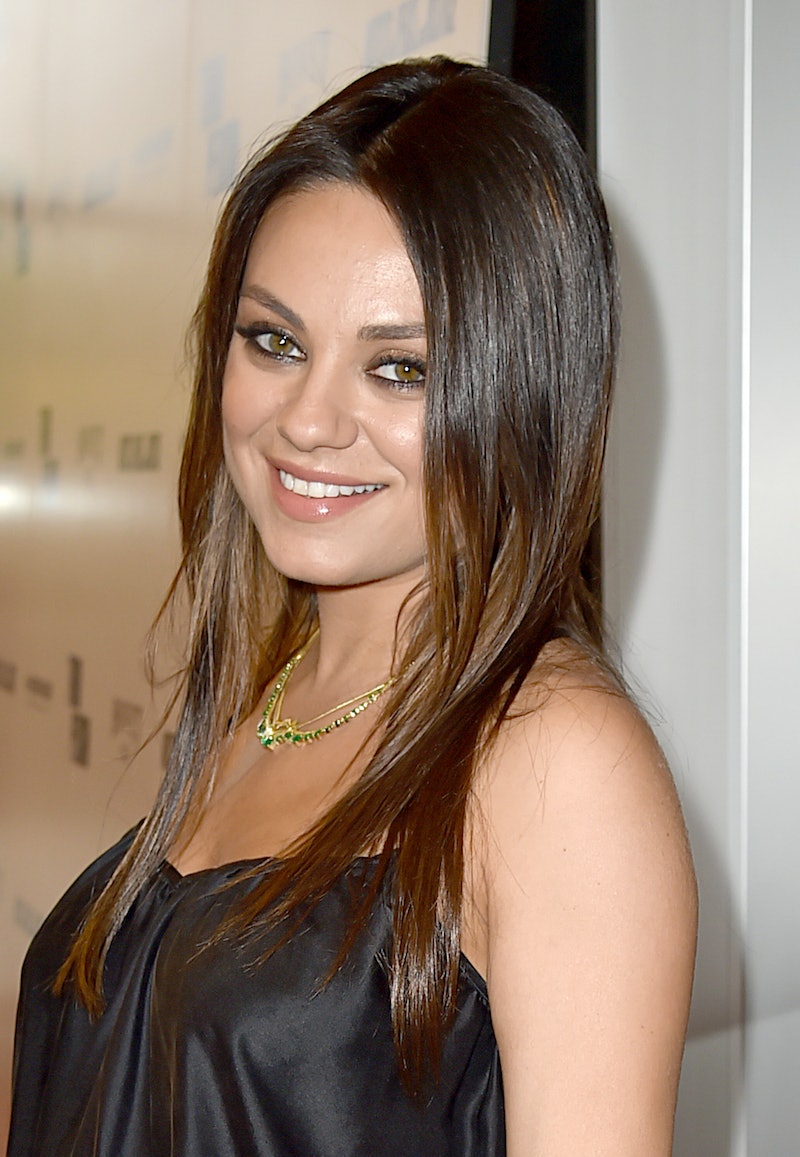 Pregnant women — and women who have ever thought about enduring nine months of baby-holding — meet your spokesperson: Mila Kunis. The actress has spoken about what it's like being pregnant with Ashton Kutcher's baby with the utmost candor and if you missed just how much she loves having a baby Kunis-Kutcher inside her, she's continuing to tell magazines just how much she loves it.

We love you, Mila, and we get it: You're pregnant. But seriously — the way that the Future Mrs. Kutcher speaks of pregnancy, you'd think she was the David Oreck of Pregnancy. There's this underbelly (overbelly? Help me with this pun, please) of a message that says, "Women! Get pregnant! It's delightful! Plus, you get to make super candid comments and win the hearts of women across the Internet."

That's probably just me, but hey, what can I say, Mila's pregnancy news is everywhere. But at least she's keeping it real. There's something genuine about the stories she shares, and it's easy to see why fans are eating up every word. I can't wait to hear, though, what they name this kid. Will they follow the celeb trend and name their kid after, oh, I don't know, a fruit? Or will they keep it more traditional and name the sucker Ruth, or something? (#NodisrespecttoRuths).

As Mila works up to shooting that little baby out her body, here's proof that she's become the Spokesperson For Pregnancy.

She said to Marie Claire, "Without being an assshole, I have to say, I love being pregnant."

2. She and Kutcher Will be "head to head" for the birth of their little baby

But not "head to vag," she's assured us. Why? "Because it will be shredded." So she wants to share it with him! But, like, in an understandable way. Also, that sounds like the title of a basketball movie — Head 2 Head: Kutcher and Kunis.

3. She Hasn't Been Shy About A Major Pregnancy Perk

She said her boobs have grown tremendously, in a way that would make people want to get pregnant to see their boobs perk up:

4. She Looks Amazing, Too

5. She Gave The Most Hilarious Rant About Fathers-to-Be

She also gave us the phrase "squeeze a watermelon-sized person out of your lady-hole," which should forever be a staple in the female vernacular. She's freaking hilarious in this video, proving that there's always room for female candor. You go, Mila!

More like this
20 Celebrity Couples Who You Forgot Dated In 2002
By Jake Viswanath
Britney Spears & Sam Asghari Announced Their “Devastating” Pregnancy Loss
By Stephanie Topacio Long
Sandra Bullock, Girlboss Extraordinaire
By Matt Harkins & Viviana Olen
Here's How To Practice Self-Love In Small Ways Every Day
By Mackenzie Sylvester
Get Even More From Bustle — Sign Up For The Newsletter