If you've been on Tumblr or on Twitter to see the Creepy Paddington meme in action, then it might surprise you to know that Paddington is actually a children's movie based on a beloved children's book. Then again, it might not surprise you at all because nothing on the Internet can alarm you anymore. Regardless, the trailer for Paddington doesn't quite play out like the horror movie we've all been imagining, but that doesn't mean parts of it still aren't creepy.

Paddington opens on December 12, 2014, and stars Colin Firth as the voice of Paddington Bear, along with Nicole Kidman, Hugh Bonneville, and Sally Hawkins. IMDB summarizes the premise of the film as, "A young Peruvian bear with a passion for all things British travels to London in search of a home. Finding himself lost and alone at Paddington Station, he begins to realize that city life is not all he had imagined - until he meets the kindly Brown family, who read the label around his neck ('Please look after this bear. Thank you.') and offer him a temporary haven. It looks as though his luck has changed until this rarest of bears catches the eye of a museum taxidermist..."

Admittedly, that last line definitely sounds like the start of a horror movie — not to mention its from the producer of Harry Potter aka that film series that continues to rip your heart and soul out no matter how many times you've seen it — but that element doesn't come up in the trailer. Instead, all of the creepiness is concentrated in the opening scene.

Paddington Bear is in the bathroom trying to brush his teeth. Trying appears to be the objective word as he's so unused to the whole activity of cleaning one's teeth that he thinks two tooth brushes are required and he uses those brushes for something way grosser than their intended purpose.

He then pulls out wads of ear wax-coated fur from his ears and licks one of them, because, you know, no one ever tells bear cubs that ear wax is not candy outside of the Harry Potter universe.

Naturally, it tastes pretty awful, so Paddington has to guzzle a whole bottle of mouth wash. Because this is a children's movie and not real life, instead of needing Poison Control, Paddinton just realizes his insides are on fire and sticks his head in the toilet to put out the flames.

Go look at your toilet. Even if you scrubbed it from top to bottom for three days with five different kinds of disinfectant, would you stick your head in it? With your mouth wide open? Yeah, I didn't think so.

The entire sequence is just one instance of cringe-worthy comedy after another, especially for gemophobes like me who arm themselves with hand sanitizer even in the house. However, the rest of the trailer — and the film overall — looks like it's going to be exactly the kind of heartwarming fair you take the kids to see over the holiday season. If it happens to add more fuel to the Creepy Paddington meme, then why complain? 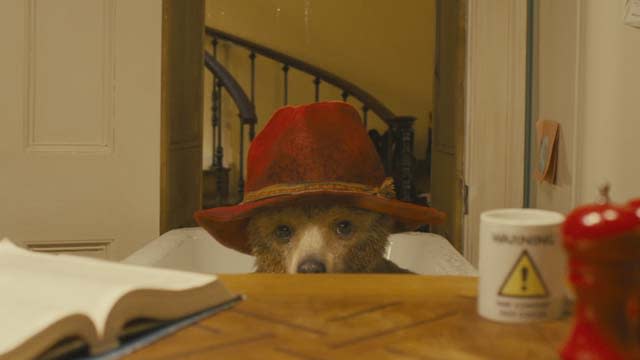