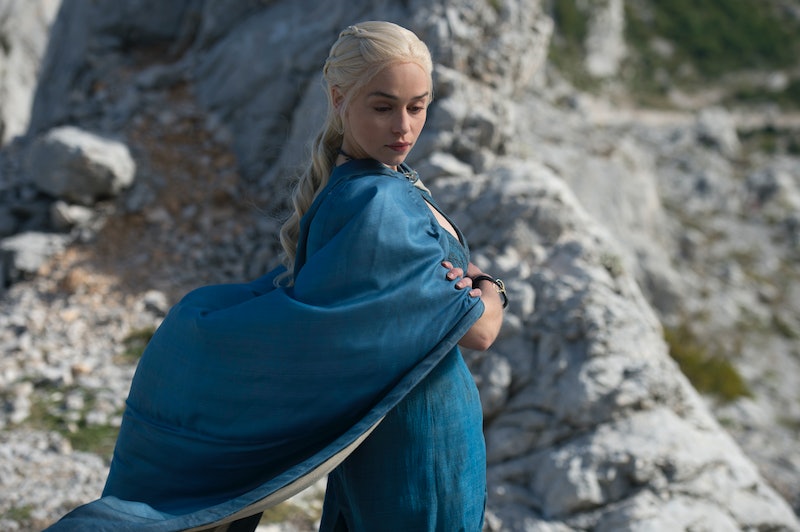 The most pressing question television writers face when adapting the written word to the small screen is how faithful they should remain to their source material. It seems that, more often than not, the answer is: not very. Now, the George R.R. Martin-inspired series Game of Thrones is facing a similar dilemma.

The most popular book adaptations on TV these days have taken the basic premise and the cast of characters and employed them in service of largely original stories. Think The Walking Dead, True Blood, or Dexter. HBO's Game Of Thrones, then, is largely an exception: the first two seasons of the fantasy show hewed incredibly close to the first two novels in George R.R. Martin's A Song Of Ice And Fire series. But when the third book, A Storm Of Swords, proved too dense to be adapted into one ten-episode season, that pattern started breaking down.

Swords is a 1200+ page behemoth that contains dragons, zombies, several battles, more than one bloody wedding, and the tragic demise of over a dozen major characters. Season 3 of the HBO show only made it just over halfway through the novel, with Season 4 finishing it off. But as Martin's saga becomes ever more sprawling and the possibility of the show catching up to his unfinished series more likely, showrunners David Benioff & D.B. Weiss have had to get more creative with their adaptation. Season 5 will be culling plot points from multiple novels, as well as likely inventing more and more new material.

A Storm Of Swords

Believe it or not, two seasons weren't enough to finish everything Martin packed into this book. There are a few lingering strands that will be waiting to be finished off next year, most notably at The Wall. From the promos for Sunday's Game of Thrones season finale, it seems like the climax for Jon and the Night's Watch will be the arrival of Stannis Baratheon to help defeat Mance Rayder and his army of Wildlings. Given how many game-changing twists the writers have to pack into one episode, it seems likely The Wall storyline will end there. But it actually goes a bit further in Swords.

After Stannis' arrival, the would-be king offers to legitimize Jon and give him rule of Winterfell if Jon will support his bid for the Iron Throne. Jon has to choose between his desire to be recognized as a Stark and his duty to the Night's Watch... a decision that's rendered moot when his sworn brothers elect him as their next Lord Commander. Stannis' offer, Jon's decision, and the election will all likely occur at the beginning of Season 5.

A Feast For Crows

When Martin was writing the sequel to Swords, he realized it was getting too long for one novel, so he split it in two. But instead of telling half the story of all the characters, he decided to tell all the story of half the characters in each book. The fourth novel, A Feast For Crows, centers on the South of Westeros — its major characters include Cersei, Jaime, Brienne, and Sansa. Many new players are also introduced, including the Martells in Dorne (seeking vengeance for Oberyn's death) and the Grejoys on the Iron Islands (plotting to conquer all of Westeros). Since the events of Crows and the fifth novel occur simultaneously, they will be merged for the television adaptation, blurring the correlation of book-to-season even further.

A Dance With Dragons

While Crows takes place largely in King's Landing and Dorne, the fifth novel, A Dance With Dragons, focuses on the North and events across the sea in Essos — which means readers had to wait eleven years between the 2000 publication of Swords and the 2011 release of Dragons to catch up with the series' four most popular characters: Tyrion, Arya, Dany, and Jon. Fortunately, GoT fans won't have to wait so long, since events of both Crows and Dragons will be adapted concurrently for the show.

It's funny how sprawling Season 1 of Game Of Thrones seemed at the time, and yet in retrospect, it was actually quite concise. The plots were centralized on the Stark family, their Lannister enemies, and Dany across the sea. But as more and more characters have been added each season, some plot threads have started advancing more quickly than others. In fact, some characters have almost caught up with the last thing that happens to them in Martin's novels — most notably Sansa, whose adventures at the Eyrie with Littlefinger have advanced almost through the entirety of Crows. And Dany will be seen making a tough decision in the Season 4 finale that she doesn't face until well into Dragons. Where will Benioff & Weiss take these stories next?

Then there's also the issue of Martin's remaining two as-yet-unpublished novels, The Winds Of Winter and A Dream Of Spring. With no release date set for Winter and the adaptation of Dragons about to commence, it seems likely that Benioff & Weiss will be forced to come up with their own conclusion to the epic saga. We've already seen them start inventing wildly original events, such as Jon's attack at Craster's Keep and Asha's ill-fated rescue of Theon. It doesn't seem too far-fetched to imagine that, as the show enters Season 5, it will take a page out of other book adaptations and start separating itself from its source material.

With Season 5 set to pull events from three separate novels simultaneously — as well as the imagination of its own writers — could we be about to see the first Game Of Thrones season that's wildly different from the books? Would that necessarily be a bad thing? Could it actually be for the best that Benioff & Weiss distance themselves from Martin's ever-growing, ever-stalling saga? We'll find out in 2015.

More like this
Emilia Clarke Shares More Details About The New 'Game Of Thrones' Series
By Maxine Harrison
What Song Does Eddie Play in 'Stranger Things'? Metallica’s “Master Of Puppets” Ignites The Season 4 Finale
By Alyssa Lapid
Twitter’s Reaction To HBO’s ‘Game Of Thrones’ Jon Snow Spinoff Idea Is Chaotic
By Stephanie Topacio Long
The Future Of 'All Creatures Great & Small' Is Confirmed & Wedding Bells Are Ringing
By Rebecca Fearn and Frances Stewart
Get Even More From Bustle — Sign Up For The Newsletter