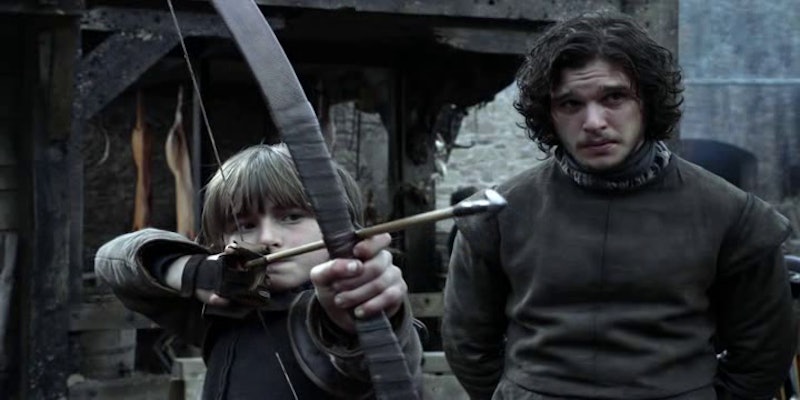 HBO's Game of Thrones has always been a largely faithful adaptation of George R.R. Martin's A Song of Ice and Fire novels. There have been a few minor tangents on Game of Thrones along the way, but nothing that has changed the course of Martin's sprawling story until Jon & Bran changed everything last week. But last week's episode, "Oathkeeper," showed the first signs that the showrunners, David Benioff and D.B. Weiss, are starting to depart more and more from their source material. The majority of the episode, including most of the scenes in King's Landing and everything that happened at The Wall or North of it, were entirely fabricated. In fact, Benioff & Weiss seem to be setting half-brothers Jon Snow and Bran Stark on a path to run into each other at Craster's Keep.

Why would a Jon & Bran reunion be such a huge deal?

After Theon Greyjoy sacked Winterfell and "murdered" Bran and Rickon Stark (he actually killed two farmer's boys after Bran and Rickon managed to escape the castle), everyone in the Seven Kingdoms thought the Stark boys were dead — including their half brother, Jon Snow. One of the only people in the world who knows they're alive is Samwell Tarly, who encountered them North of The Wall on his way back to Castle Black. He swore Bran a solemn oath to tell no one the truth, even Jon — a vow Sam has never broken. On the TV show, Sam and Jon have only been reunited for a few episodes... and Sam has already told him that his half-brothers are alive and well.

And Jon's not the only one to have discovered the truth. During his torture, Theon told Ramsay that the Stark boys were alive, who in turn told his father Roose, who in turn sent his henchman Locke to the Wall to find them and kill them — for real this time. Seems like half the kingdom knows that Bran's alive.

So why is this a big deal? Not only does it rob us of juicy Sam conflict (it's really difficult for him not to tell his best friend that his brother hasn't been murdered), but the whole point of the Stark family drama is that they never meet. We've been teased with near-misses several times before: when Bran and Rickon were in the tower and Jon was with the wildlings below; when Arya arrived at the Twins just as her mother and brother were being slaughtered. It's clear that Martin is saving any sort of Stark reunion for the end of his saga, and a meeting between Jon and Bran at this midpoint could rob that eventual reconciliation of its emotional heft.

What does this departure mean for the series?

Jon knowing Bran's fate isn't the only liberty taken in "Oathbreaker." The entire plot about Jon venturing from The Wall to Craster's Keep to kill the mutineers before they can betray the Night's Watch is a complete fabrication that is nonexistent in Martin's novels. This is undoubtedly the single biggest liberty taken on the show to date. Fans and critics alike have long been wondering what would happen to the show when the writers started catching up to their source material... and it seems like we're starting to see the answer to that question.

Sure, Benioff & Weiss still have two whole books to go before they reach the current endpoint of Martin's novels, but that's not actually much in the grand scheme of things. Each of the remaining two books, A Feast For Crows and A Dance With Dragons, only features half the characters of the series, with the plots of each book occurring simultaneous to the other — which means that it's really more like one long book than two separate ones, since they will have to combined for the TV show. And more than any of the three that preceded them, much of Feast and Dance occur inside characters' heads... which is fascinating insight to gain on the page, but doesn't provide much fodder for an action/adventure television series.

Benioff & Weiss have stated that they currently plan to end their show after Season 7, and it seems unlikely at his current pace, Martin will have published his final two books in the next three years. Barring some seriously fast writing in the near future, it's virtually certain that Benioff & Weiss will have to create their own ending for the TV show. Could Jon's foray to Craster's Keep and his reunion with Bran signal the showrunners' first steps into turning Game of Thrones from an adaptation into an original story?

Is such a huge change necessarily a bad thing?

The idea of Benioff & Weiss starting to craft their own version of events might be worrying to hardcore fans of Martin's novels — and there is precedent for such concern. Other shows that have been adapted from novels and chosen to ignore the source material in favor of original plots have famously gone off the rails: see HBO's True Blood or Showtime's Dexter. (AMC's The Walking Dead is currently walking a perilous tightrope between success and disaster in that respect.)

However, there are plenty of signs that changing the narrative would, in fact, but a good thing for Game of Thrones. The third book, A Storm of Swords (the second half of which forms the basis for Season 4), is universally considered the best of Martin's novels — neither Feast nor Dance lived up to the cataclysmic events of Storm, since they feature long sequences of major characters doing... nothing much. Think of Dany stalling in Meereen for what feels like an eternity. Or Tyrion wandering through Essos. Or Brienne searching for Sansa. Or Bran journeying North of The Wall. Or Stannis stewing at Castle Black. Or, heaven help us, that never-ending Kingsmoot.

Perhaps the end of Season 4 — and the end of their adaptation of the best book in the series — is the perfect time for Benioff and Weiss to strike out on their own and separate their show from its source material. They would have three seasons left to craft their own compelling story with all the characters we know and love. Wouldn't that be better than killing time, waiting for Martin to publish two books that might be years — or god forbid, decades — in the making?

We'll see for ourselves whether Benioff & Weiss are capable of crafting satisfying original content this week when Jon arrives at Craster's Keep. Hopefully this particular change will be a good omen for many more interesting departures to come.

(Then again, maybe Bran will escape and run away from Craster's Keep just as Jon is arriving, making this but another in a long line of near-misses for the Stark children...)