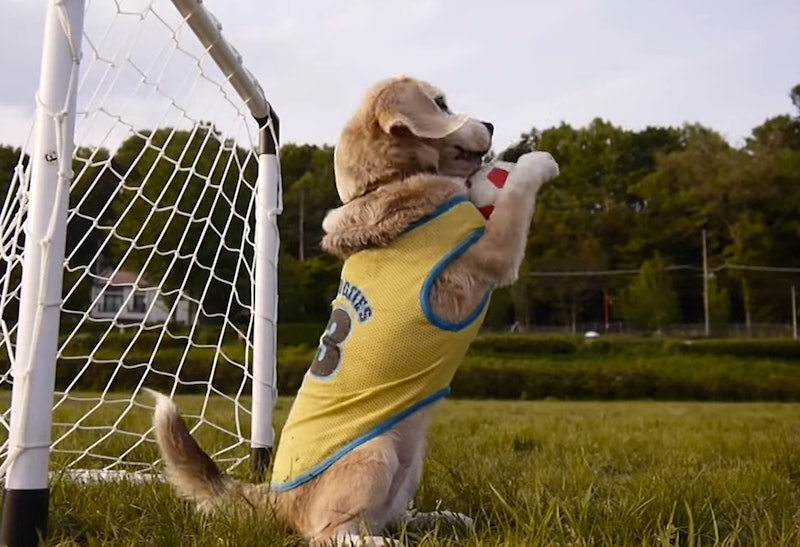 As the Puppy Bowl has taught us, there is no sporting event that cannot be made better with puppies, and soccer is no exception. With Brazilians protesting the World Cup and its drain on national resources, allegations of corruption in FIFA, and the fact that the US team is probably not going to do very well, it's hard for a lot of people to get too excited for the World Cup. Fortunately, plenty of people are lining up to provide canine alternatives that have us all eagerly awaiting the games.

Watching the England v. Italy match is way more fun when the teams are made up of competing puppies, as the Huston SPCA proves to all of us in their puppy match up video. The game comes complete with sports announcers and ESPN-like commentary, not to mention a lot of cute puppy dogs eager to play with one another (if maybe not so much with the soccer balls). So who will triumph in this clash of skill and cuteness? Is England just looking for attention? And will their prediction for the match line up with the wise prophecy of psychic puppy? Because we just can't have disagreement in the puppy world!

But if you're feeling like those puppies weren't really exhibiting the sorts of skill you've come to expect of your canine athletes, then behold instead the soccer stylings of Purin the Super Beagle! With her goal making and goal stopping abilities, plus her talent for walking on her front legs, she is more than ready for her debut as a World Cup athlete. We believe in you Purin, even if those pesky rules say you have to be human.

And certainly Purin the Super Beagle is more prepared than these cute puppies, who don't even seem to understand what the tiny little soccer balls are for. But they are so fat and cute!

But the ultimate source of puppy soccer this World Cup season is bound to be the World Pup tournament on Animal Planet, starting July 12th at 3pm EST. Animal Planet is matching up international dog breeds against each other, so the Spain v. Netherlands match becomes Great Pyrenees v. Keeshond (I had look that second one up. It's so fluffy! ). The matches will continue until one dog breed is crowned the winner on July 10th. So if these videos aren't enough World Cup puppy madness for you, Animal Planet should have you covered. Would you expect anything less from the people who brought you the Puppy Bowl?

More like this
Jamal Musiala Has The Cutest Nickname Based On A Disney Character
By Catharina Cheung
21 Absolutely Adorable Christmas Gifts For Dogs
By Carolyn Steber
If You Have Pets, You Probably Don't Realize You're Making These Common Mistakes
By Mackenzie Edwards
Here’s Your Daily Horoscope For December 6, 2022
By Mecca Woods
Get Even More From Bustle — Sign Up For The Newsletter