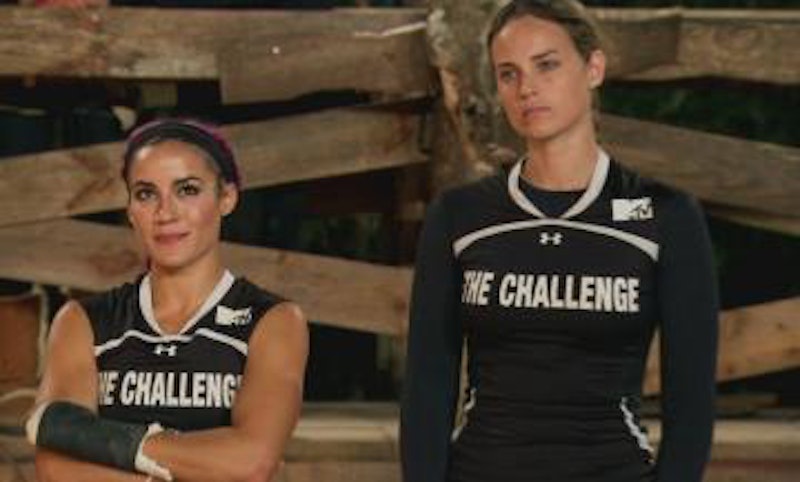 Well, we all knew it would come to this eventually: Cara Maria and Laurel are finally going to face off in an elimination to end all eliminations. Unfortunately, we won't get to see the results until next week, but Thursday's episode sure did leave us hungry for it. After sustaining a fracture in her hand, Cara Maria was given the "okay" by her doctors to continue on in the competition. It seemed like everyone was rallying around her this week (especially that big lug from Boston, CT) until it came time to vote for eliminations. Then, all bets were off when Nany and Bananas threw her in. We all know The Challenge can be a heartless game, but voting in someone who has beaten out more competitors in the eliminations and managed to make it through a grueling course with a broken hand... well, damn y'all.

As we near the finale, relationships all around the house are fraying, especially those surrounding Cara Maria. Her two strongest female allies were Laurel and Theresa, and now they've both turned against her and are rallying the troops. The only person who actually does have her back now is CT, who was also voted into the elimination. Knowing them as competitors, they'll take the heat and use it to fuel themselves in the competition. Who would have thought that CT and Cara Maria would be the pair we'd all be rooting for?

The players are starting to play a lot dirtier and a lot less safe as the numbers dwindle. Devyn and Zach continue to fly under the rader while Theresa and Johnny get by on luck and a little bit of politics. But this upcoming elimination will be a game-changer. Cara Maria or Laurel going home means a huge shift in the female line-up. Either way, one of the strongest competitors will bow out. If CT send Leroy home, then he's coming back with a vengeance for Bananas (and good riddance to you, Mr. Bananas, I say!).

If there's anything we can predict, it's that broken bones or no broken bones, Cara Maria will not go down without a fight. And now that she's facing off against her former best friend... well, they might just want to hand that $125,000 to her right after the elimination.

More like this
What's New On Netflix: A Third '365 Days' Movie & Lili Reinhart’s New Film
By Arya Roshanian
What’s New On Netflix: 'Never Have I Ever' & 'Indian Matchmaking' Return
By Arya Roshanian
Everything To Know About The HBO Max & Discovery+ Streaming Service Merger
By Brad Witter
All The Celebrity Relatives Revealed On 'Claim To Fame' So Far
By Brad Witter
Get Even More From Bustle — Sign Up For The Newsletter