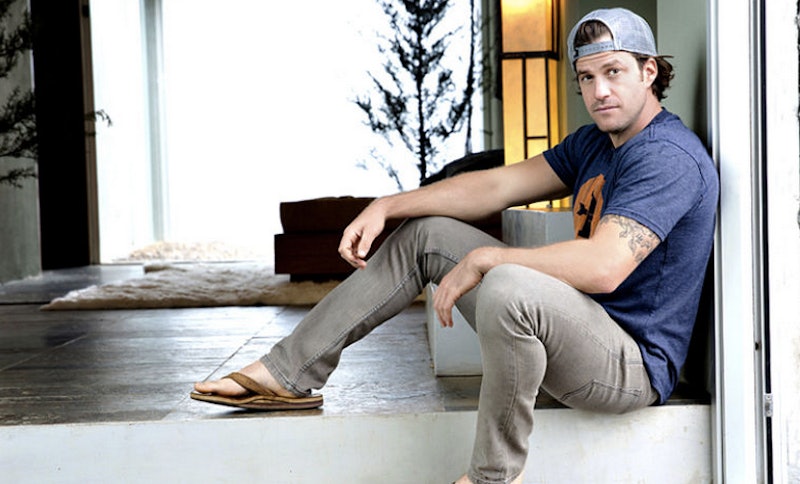 There were puh-lenty of stupid things said on Thursday’s episode of The Challenge, but Johnny Bananas takes the cake for the absolute WORST thing to come out of any of the competitors' mouths. After Jordan’s victory over Swift in the elimination, Bananas said smugly, “Jordan, your win against Swift was kind of like when you hook up with a fat girl and you don’t want your buddies to find out about it so you keep it to yourself.” Though it’s not news that sexism and bullying are rampant on The Challenge , it doesn’t make it any easier to stomach.

Earlier in the episode, Bananas also embarrassed himself during the Smarty Pants trivia challenge by saying Dutch was the official language of Australia — proving that he is small-minded in more ways than one. Though I suppose that's what we can come to expect from a grown adult who goes by the name "Johnny Bananas."

Sadly, Bananas' disgusting remark wasn’t the only horrendously offensive thing said by a contestant. After Theresa lost a round in Smarty Pants for not knowing that Russia is the largest country in the world, she commented, “Who ever thinks of Russia? I forgot they even exist.” Oh... oh... oh my... I just... my brain... everything hurts. Sure Theresa, no one ever thinks of Russia. Especially not now. This is definitely a time when people aren’t thinking about Russia.

And if you needed to lose your faith in humanity any further, here are a few more depressing results of the Smarty Pants challenge: Words like “bicentennial,” “svelte,” and “acquaintance” are too hard to spell; Cara Maria doesn’t know what CONTINENT the United States is on (or what a continent is for that matter); CT didn’t know how many stripes are on the American flag; and Aneesa thought Asia was a country.

The only good thing to come out of Thursday’s episode was learning that Zach really likes Disney princesses and Devyn has a shot at winning the game with politics and personality. I’m trying to look on the bright side here, but all I can think about is Bananas' awful comment and wondering who keeps putting this guy on television.

More like this
Jake Daniels Just Became The UK’s First Active Football Player To Come Out As Gay Since 1990
By Sam Ramsden
What Is Jeanie Buss' Net Worth? The Lakers President Is Uber Rich
By Hugh McIntyre
Kylie Jenner Roasts Kendall For Her Cucumber Cutting Skills On TikTok
By Jake Viswanath
How Reality TV Stars Conquered Your Bookshelves
By Anna Peele
Get Even More From Bustle — Sign Up For The Newsletter