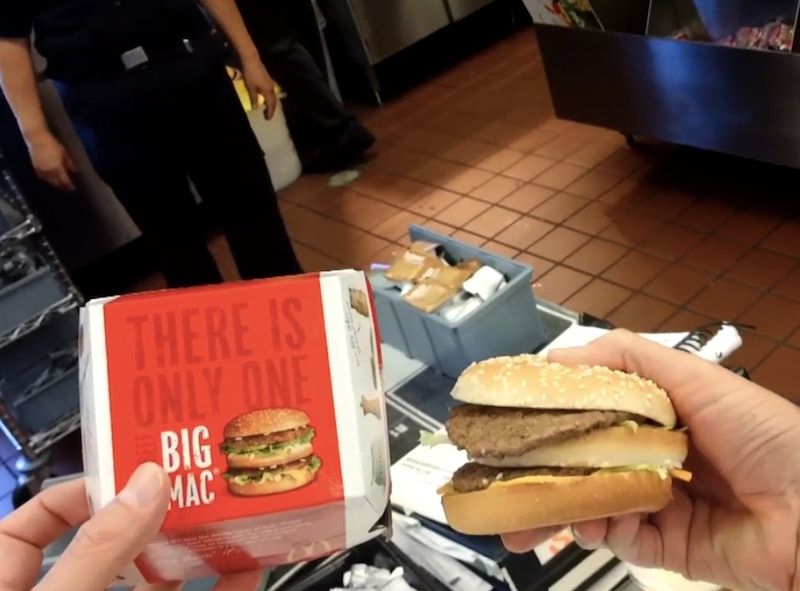 We’re all painfully aware that the burgers, fries, and milkshakes presented in fast food commercials usually bear little resemblance to what you get when you order those items in real life. But guess what? It turns out it’s not impossible to snag a pretty-looking burger from restaurants like McDonald’s and Burger King. As Greg Benson of Mediocre Films’ “Fast Food Ads vs. Reality Experiment” proves, all you have to do is ask!

Benson set out with a camera rolling to see whether he could get five different fast food joints — McDonald’s, Jack in the Box, Wendy’s, and two different Burger King locations — to make their food look like it does in their ads. Upon receiving rather sad-looking versions of the gorgeous eats depicted on each restaurant’s website, he asked the staff to whip him up something that looked like the pictures. I’m honestly not sure which part of the whole thing is more amazing: The fact that each of the restaurants actually agreed to remake the food, or the fact that every single time they did, the results actually looked pretty damn good. Bonus points to the second Burger King location, which produced a fabulous-looking Whopper on the first try — and even bigger bonus points to the cashier at the McDonald’s who laughed his head off when his manager went back to put together a new burger for Benson. The moral of the story? If you want better-looking fast food, speak up:

Of course, it’s always possible that should you do so, the restaurant might say no to making your order all over again — which might have something to do with exactly when you ask them to go the extra mile. As Mike Fahey at Kotaku noted, “I'd advise against trying this under less than the ideal conditions presented in this video. If I walked into my McDonald's during the lunch rush and asked them to make my burger pretty, at the very least my request would be politely declined.” Truth — although if you end up with something like what happened to redditor Sasquatchfl over the weekend, you’re totally justified no matter what time of day it is:

You had one job, Burger King. Seriously. How does that even happen?