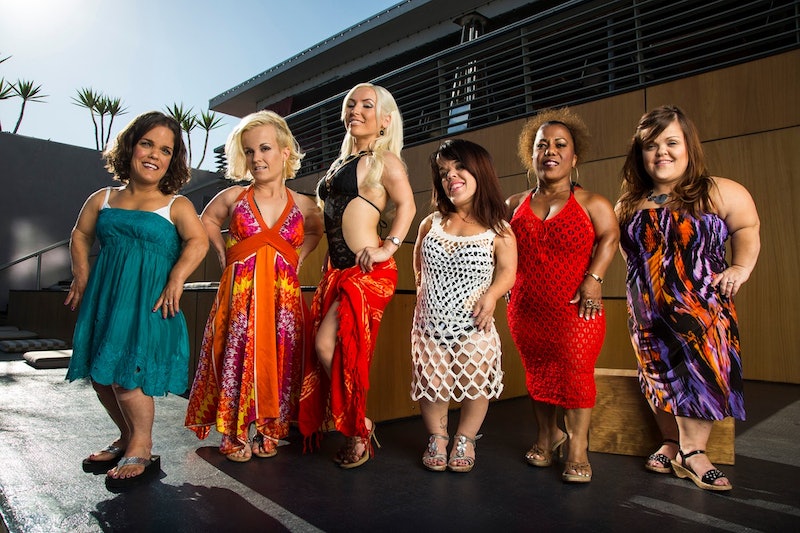 While some may opine that reality television is purely a trash medium, (and I'm not going to lie to you, sometimes it totally is), I'd argue reality shows, for better or worse, are the only place we are consistently treated to outsider narratives. You probably can't name an Armenian star that's not a Kardashian, or find yourself struggling to name shows that feature a majority black female cast, but open yourself to the medium of reality programming, and the field gets way more diverse. Lifetime's Little Women: LA is part of that diversification.

While on the surface it may seem potentially exploitative, the show handles its subjects with a lot of love and care. The fact that one of its cast members, Terra Jole, is also a producer lends credibility to the show behind the scenes (although that's not the only reason we're in love with the ladies of Little Women). Common Sense Media, a television guide for parents, recognizes the show promotes themes of being comfortable in your own skin. Don't worry: they also single the show out for the usual reality staples of drinking and sex, so you get to enjoy some of that delightful adult-friendly content you expect of your new favorite summer tv show. It's refreshing to see the stars treated as women first, who love and party and pursue their dreams in the City of Angels, which is why we're absolutely obsessed with the show's colorful cast.

From an ersatz Britney to a financial kingpin, here's the lowdown on the current love lives of each of the show's stars.

Animal rights activist, celebrity impersonator, and Miley Cyrus tour fixture, Jole is has had quite a career so far. While her stage presence includes performances in the style of Britney Spears and Lady Gaga, Jole keeps it real off-stage. She's currently dating actor/musician Joe Gnoffo who has appeared in big Hollywood productions like the Julia Roberts starrer Mirror Mirror.

McGinty's relationship status is perhaps the most well-known given her fairly recent engagement to beau Todd Gibel, whom she met online. He's pretty active on Twitter, even boasting their own couple hashtag, #TeamChristyandTodd. Since the couple met on the interwebs, Gibel uprooted his life in Cleveland to join his lady love out on the Golden Coast.

This former Jr. Dragster racer is a full time mother, raising her four year old daughter Leiana from a previous marriage. A talented performer in her own right, Manson is ready for the next step and ready to date again. In her search for love, Manson maintains size doesn't matter to her, despite the fact her ex-husband is also a little person. (Here's hoping this season brings her some juicy dating prospects!)

This Russian beauty got Lifetime served with cease and desist order for her "Little Britney" routine, which apparently infringes on the name of a Las Vegas act. Gant is married to the 6'2" Preston Gant who she hitched up with after six months of dating. The couple has been three years strong with no signs of stopping.

Also an online dating success story, this aspiring teacher met her now-fiance Eric Tsou on the website DateaLittle.com. They've also been dating for three years and plan to be wed later this year, meaning we have not one but two Little Women nuptials to look forward to.

Banks probably has the longest career under her belt with over 30 years of film, television and commercial work. She's sassy, single, and ready to mingle as the show's resident independent lady. Unlike Manson though, Banks is looking to nab herself a tall man.