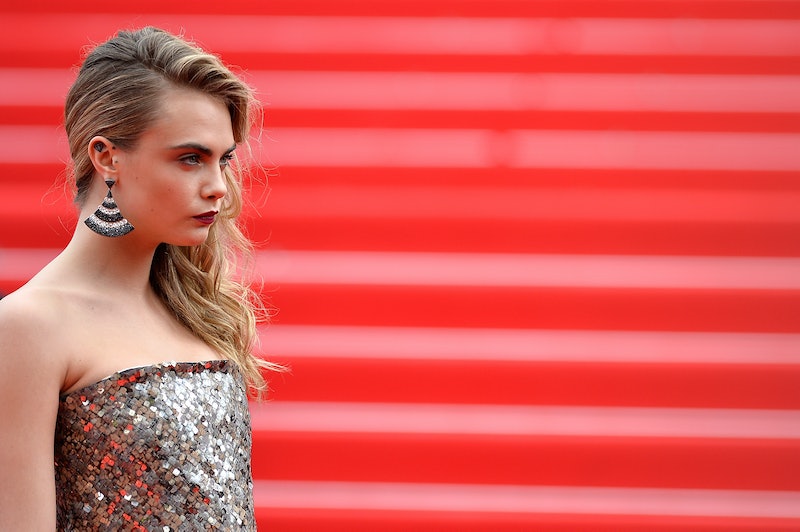 Cara Delevingne is a badass because as cool and hot as she is, she's also pretty real. The Guardian interviewed Delevingne in anticipation of her upcoming television debut in Timeless and the model-turned-actress had some harsh words for the industry that helped make her a star.

Here's what she told The Guardian about her job: "You're looked through, you're not looked at, you are treated as a kind of mannequin. I got a tattoo saying Made in England above my foot to represent that, that I felt like a doll for so long. Because you are just a kind of puppet, you know, entertainment. You kind of feel that you need to have no soul really, to do that job, a little bit."

Delevingne is biting the hand that feeds her, yes, but she's famously dismissive of the fashion industry and that's part of what I like about her. She seems open about using her modeling career as a means to an end (in this case, acting), which is refreshing. Delevingne sticks to her guns. She also can't stand photographers. From The Guardian profile:

In addition to the photographers outside, there are more photographers inside the hotel. Delevingne says that she fantasises about one day punching one – "I'd love to, I really would, I'd be so happy, I dream about it at night" – but she seems happy enough posing for them, which involves much pulling of faces on her part.

In celebration of Delevingne's defiance against the vehicles for her fame, here are all the times she's hated on modeling and the fashion industry.

Delevingne dissed Fashion Week in an interview with Industrie magazine, saying "What I find hard is having to deal with all the people and all the crap. It's when the press and fans are following me most, and it's when I work the hardest, so it's kind of like, fuck."

"What bothers me, I guess, is when I get these messages from girls on Twitter, and they're like, God, you're my idol, I really admire you. It's like, Admire me for what? What have I done? It's not that being in a Burberry campaign, or walking in a Chanel show is nothing. It's just…I know I can do more."

"The worst part of being a model? I hate high heels, more than anything. It's the physical side of modeling that is bad, not sleeping, having to work 78 consecutive days."

In March of 2014, Delevingne took to Twitter to express her outrage at the paparazzi for stalking celebrities.