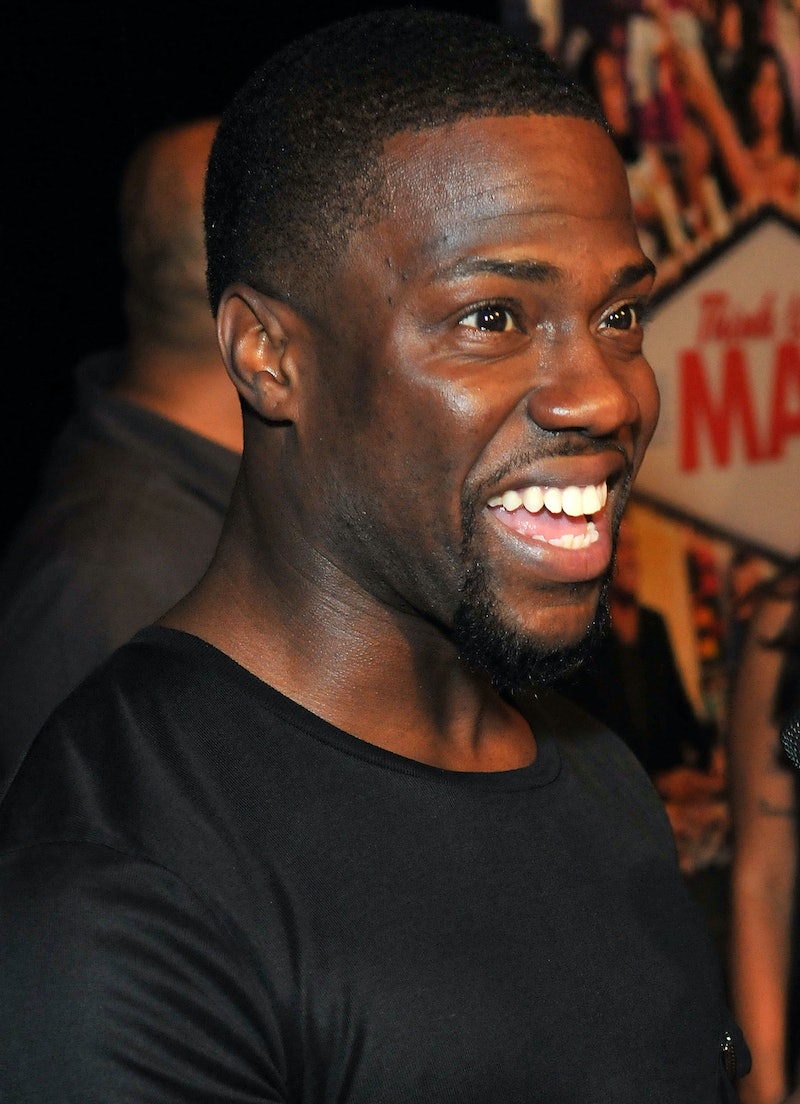 Stars: they're just like us! In that they also have crippling phobias! As it turns out, Kevin Hart is not a fan of roller coasters, but that didn't stop Jimmy Fallon for putting him on a really scary-looking one...twice. (Wait, isn't Jimmy Fallon supposed to be a nice guy?!) During a visit to the Tonight Show on Tuesday, the Think Like a Man Too star unwillingly found himself riding in the front of the Hollywood Rip Ride Rockit at the Universal Orlando Resort. Like anyone with a roller coaster phobia would, Hart screamed and panicked his way through the entire ordeal, only to have to find out when it's over that he'd be taking another ride. Way harsh, Jimmy. Way harsh. (In a karmic twist, he gets a bug in the mouth during the ride.)

During the filmed segment, it's hard to not feel bad for Hart (who admitted he had sweaty, clammy hands at the thought of going on a roller coaster and feared he would "look like a bitch" if he didn't get on the ride), but you're still definitely going to laugh at him. For anyone that's tried to face their fears — or convinced someone else to face their fears — this will be as traumatizing to watch as it is cathartic and very, very funny. Check it out:

Gosh, that ending is just cruel, isn't it? Of course, the 33-year-old comedian/actor is hardly the only Hollywood star to have a crippling fear. (At least fears they've publicly admitted to.) In honor of Kevin Hart's brave roller coaster ride with destiny, here are nine other celebrities and their worst phobias.

It had to be snakes, didn't it, Matt Damon? According to his We Bought a Zoo co-star Scarlett Johansson, the Oscar-winner was "terrified" on the set of the family dramedy. Even Damon himself admitted, "I'm afraid of snakes."

Maybe it is true what they say about Canadians! Okay, and he's not even technically afraid of the actual dark, just the "philosophical" kind.

The America's Next Top Model host (which had a dolphin challenge, mind you) once told People, "I've been afraid of [dolphins] ever since I was 8 or 9. I have dreams that I am in a pool and there are dolphins bumping me and I'm frightened." During her talk show she said that even the thought of dolphins gives her "anxiety." No one tell her about Margaret Howe.

No wire hangers (or any other kind) EVER! The pop star once told Elle magazine, "I have a hanger phobia. I don't like the way they sound when you put them in the wardrobe."

Who isn't? As Depp once put his Coulrophobia, "There always seemed to be a darkness lurking just under the surface, a potential for real evil."

The actor's fear's are so well-documented there's actually a New York Times article titled "Why Billy Bob Thornton Is Afraid of Antiques."

Not the Justin Timberlake song, mind you, but her actual reflection. Anderson is what's known as an eisoptrophobic.

Time is a flat circle.

More like this
Tanya Burr Is Expecting A Baby With Her Mystery Partner
By Maxine Harrison
This Wi-Fi-Enabled Pet Feeder & Camera Gave Me Peace Of Mind On An Overnight Trip
By Danielle Calma
This Dog Food Is Not Only Super Healthy For Your Pup, It’s Also Better For The Planet
By A. Graham
If You Have A Dog, Trainers Say These 30 Clever Things Will Genuinely Make Your Life Easier
By Dena Ogden
Get Even More From Bustle — Sign Up For The Newsletter