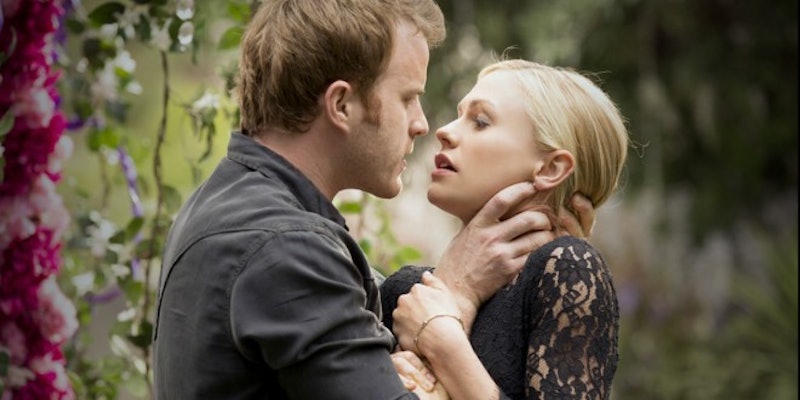 "I wanna do bad things with you." So Jace Everett sings in True Blood 's fantastic opening credits — and for six whole years, HBO's campy vampire drama has fulfilled that promise, gracing us with more than our fair share of sex, blood, and bloody sex. But it all comes to an end this summer: the seventh season of True Blood, premiering this Sunday night, will also be the show's last. Though there is a series of books by Charlaine Harris chronicling the adventures of Sookie Stackhouse and her various vampire/werewolf/shifter suitors, don't expect to know how True Blood will end just because you've read Dead Ever After — after all, the series hasn't really followed the plot of the novels since Season 1.

So what exactly can we expect from this final season? Hopefully the writers have crafted a satisfying conclusion to the show that we've loved for seven years... even when it tried our patience with an ever-burgeoning cast and ever more ludicrous plots. (Remember Billith? We try not to.) But before we dive head-first into the Season 7 premiere, titled "Jesus Gonna Be Here," let's dust off the cobwebs and remind ourselves where we left off ten long months ago.

After ancient half-vampire-half-faerie Warlow tried to forcefully marry Sookie and turn her into a vampire, Jason and grandpa Niall saved her by staking the sexy-but-evil hybrid. An unfortunate side-effect of his death was that all the vampires who had consumed his fae blood lost their ability to daywalk.

Sadly, when Warlow died, Eric was sitting very relaxed — and very very naked — on a mountainside in Sweden. (He had gone off to grieve his sister Nora's death in solitude.) So when his daywalking ability disappeared, he had no escape from the sun... and promptly burst into flames!

Sookie and Alcide are together.

After Warlow's death and Eric's maybe-demise, the show skipped ahead six months... and picked back up with Sookie and Alcide now officially an item. The pair had bonded after Terry Bellefleur's funeral, and it seems like the passage of time did well for them.

Sometime during the time jump, Sam was elected mayor of Bon Temps. The Hep-V that was introduced into the Tru Blood supply has turned some vampires rabid, snacking on humans like zombies. Sam urges every human in Bon Temps to partner with a non-infected vampire for protection. Arlene hosts a social at Merlotte's (now called Bellefleur's, which she owns) as a matchmaking event.

Bill is an author.

In the post-Lillith stage of his life, Bill has become an author and vampire celebrity of sorts. (His book is called "And God Bled.") At the social, he offers to become Sookie's protector, but she rejects him in favor of Alcide. She doesn't trust him anymore, and thinks she's safe with a werewolves. (Is she...?)

The estranged mother/daughter duo seemed to come to a new understanding when Lettie Mae tearfully offered to be her daughter's human companion. "Let Momma feed you," she cried.

Season 6 ended with a shot of the new vampire/zombies bearing down on the social at Bellefleur's... drawn by the irresistible smell of a crowd of humans. Will everyone make it out of the attack alive? Is True Blood basically turning into The Walking Dead for its final season? These questions and more will be answered starting this Sunday!

Oh, and just in case you forgot (because there are approximately 1 billion characters on the show now), here are some of the newer faces that you may have forgotten about:

Willa was turned by Eric in attempt to persuade her father, Governor Burrell, away from his assault on vampires. Instead, he just locked her up in his interment camp with all the other bloodsuckers. She attempts to bond with Pam over their shared parentage, but Pam leaves her behind to go search for their missing maker.

Andy's half-faerie daughter by Maurella, Adilyn was one of four offspring — before the other three were accidentally drained to death by an out-of-control Jessica. She helped rescue Sookie from Warlow by accessing the faerie plane where he had taken her.

Jason's new vampire squeeze. They met when they were both imprisoned at Governor Burrell's camp. She's intimidating and possessive, but also loyal: she aided in Sookie's rescue by terrorizing Adilyn enough to allow the half-faerie to access her powers.

Jessica's new vampire squeeze, who was also introduced at Burrell's camp. The pair was forced to have sex together for the Governor's experiments, but James refused and was punished for it. This led to a deep bond between him and Jessica. Just don't get too attached to his face. Actor Luke Grimes was replaced between seasons by newcomer Nathan Parsons when he dropped out of True Blood to be in Fifty Shades Of Grey instead.

And here's the Season 7 trailer to get you stoked (not staked) for the premiere.