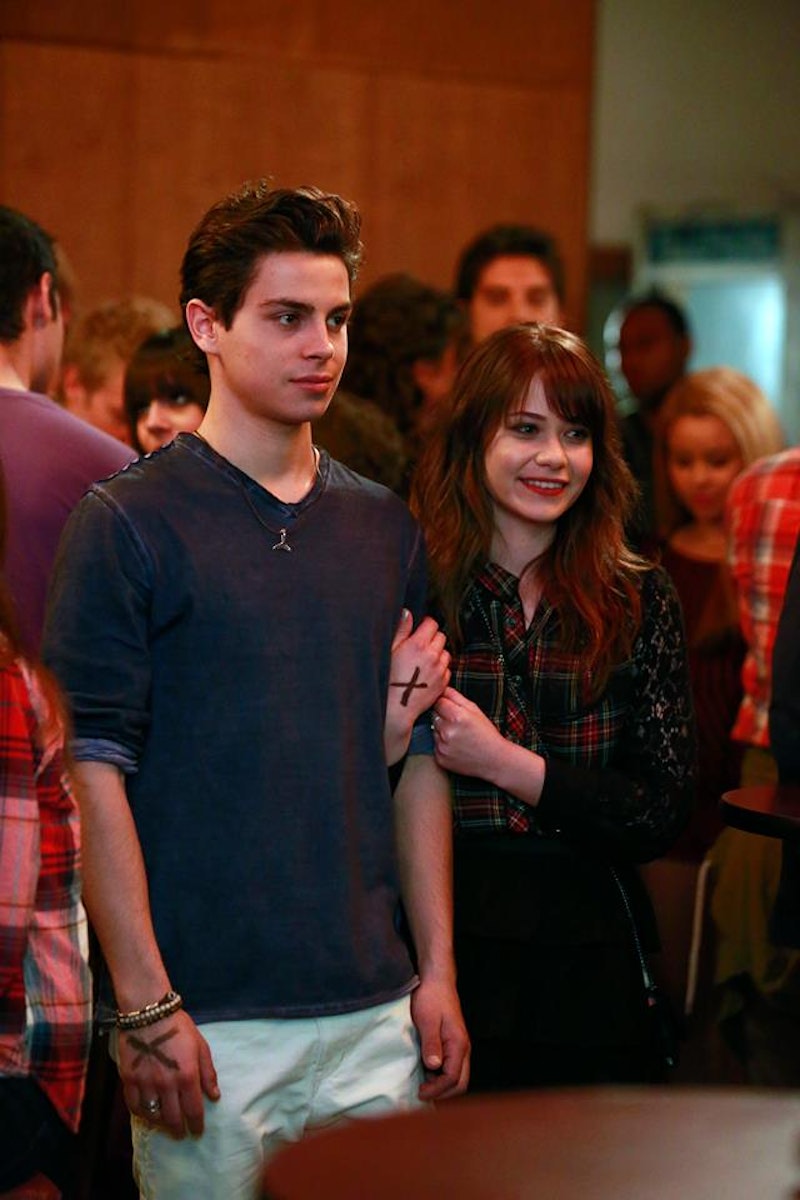 What the hell is going on with this guy? Has Jesus always been the worst and we were just too busy hating on self-destructive Brandon to notice? Jesus' relationship problem started last season and when ABC Family's The Fosters Season 2 premiered on Monday, it seemed like things haven't gotten any better. Maybe Jesus needs to take a break from dating and focus on having some "Jesus Time" to figure his issues out. The synopsis for "Take Me Out," Season 2's second episode, reveals that there's still relationship trouble for Emma and Jesus on the horizon. And, well, it's all Jesus' fault.

Emma's a reasonable person and Jesus just seems like he's, well, not. At all. And it was blatantly obvious during last Monday's Season 2 premiere that he's trying to blame Emma for whatever is up with him. Which is really so not cool, considering how far out of his way Jesus went to get Emma to date him in the first place. He's really treating her like crap and like she's trying to take over his life, when Jesus is the one making everything extremely uncomfortable and awkward between them.

In the promo for Monday night's episode, there's a brief flash to Jesus and Emma in what looks like the back seat of a car. It also looks a lot like she's trying to take their relationship to the next sexual level and Jesus is so not into it. Now, after a season's worth of Emma character development, I feel like it's really not like her at all to throw herself at Jesus in that way. She's into him, yes, but she's just not one of those girls and The Fosters spent a lot of time reiterating that point. So, I'm forced to believe that she's trying to figure out what it is that's wrong with Jesus and she's assuming that a lack of nudity is the issue.

I've always liked Jesus — he's trying his best to figure things out, he's committed to his wrestling, but he's just not great at dating. Which is fine, no one in high school is that good at dating. You do your best to treat the person you're with with respect and try not to ruin their social lives and these relationships run their course. But it seems like, where Jesus' relationship with Emma should be great and easy because they were BFFs first, he's decided that she deserves to be treated terribly.

During the premiere, Jesus gave off this vibe that Emma was trying to monopolize on his time and keep him away from his friends, which totally not the case. But he lies to her anyway about wanting to go paintballing with his bros by saying he has a "family thing." Jesus ultimately feels guilty — as he should — and comes clean and Emma's all like, "Why do you think I'd be upset by that? I'm more upset that you're lying and treating me like a psycho." Which is an entirely justified and reasonable way to feel because she wants this relationship to work. Sure, Emma's feeling sad because Jesus' friends also used to be her friends (#wrestlinggirlproblems), but they agree to work on it.

Then Jesus makes a huge, wildly ignorant mistake — he tries to quit wrestling for her because he thinks that's what Emma wants. C'mon, Jesus, really? Why are you trying SO hard to become Foster fans' least favorite character (AKA the new Brandon)? Of course Emma doesn't want you to quit wrestling — the hobby that brought their friendship-turned-relationship together — just so she can have some friends again. Emma's really not that childish and here's Jesus, who knows her better than anyone, treating her like she's a token "crazy girlfriend." Honestly, it's offensive and disappointing, considering how independent and semi-manic-pixie-dream-girl Emma is. She's cool, she hangs with the guys, and she wants Jesus to have life apart from their relationship. That doesn't sound like someone who's controlling that Jesus should be afraid to talk to when he wants to hang out with the guys alone.

So, why is he treating her like this? Is this just typical Jesus behavior when he wants to distance himself from a girl so that she'll break up with him? I mean, when he decided he didn't want to date Lexi anymore, he avoided her and then when she showed up at his door, he dumped her with a text messaged — well, he tried to and failed and ended up getting dumped by her instead. If that's already the case this time, Jesus needs to man-up and speak his mind because as his friend and as a pretty decent human being, Emma deserves a lot more than to be toyed with.