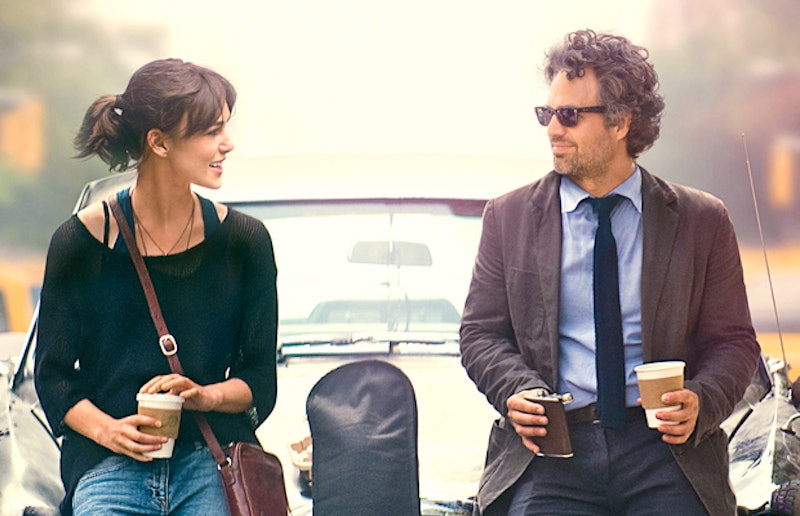 When I first learned that I would be seeing Begin Again , John Carney's follow-up to Once , I was excited for a number of reasons: 1) I love musical movies, with literally no exception, 2) the trailer looked great, so I wouldn't have to be embarrassed about loving this particular musical movie, and 3) it stars Mark Ruffalo, one of the most appealing, likable, and adorable actors in Hollywood.

And what he does, of course, is charm. A look back at Ruffalo's seven most endearing roles:

Ruffalo's role in the beloved drama may have been small, but he still made quite an impact as a guy who charmed his way into an affair with his co-worker (Kirsten Dunst). Even Ruffalo's least likable roles still somehow manage to be appealing.

At first, the idea of pairing Mark Ruffalo up with Keira Knightley seems questionable; how could those two actors, as different as can be, manage to seem believable as romantic interests? Yet all doubt is destroyed by their first few scenes together, in which Ruffalo proves that he has the ability to charm literally anyone he meets, no matter how unlikely it seems. There's simply no way not to fall for him, at least a little bit.

It's easy to see why Jules (Julianne Moore) and the kids (Mia Wasikowska and Josh Hutcherson) were drawn to Ruffalo's Paul in this Oscar-nominated dramedy — despite all his flaws, he was effortlessly likable, able to bond with anyone who came in his path. For someone like Nic (Annette Bening), immune to his charms, Paul's inconsistency and lack of consideration for others was just infuriating, but for those who adored him, none of that really mattered.

To clarify: we're talking Ruffalo as Bruce Banner here, not Ruffalo as Hulk. Playing the careful, nervous scientist with appealing charm, the actor made us care about his character, which is more than most past Hulk iterations can say.

Was Just Like Heaven a particularly good movie? Nope. Was it superbly enjoyable, mostly because of Ruffalo's sweet, lonely widower? Absolutely.

Starring as Terry in Kenneth Lonergan's 2000 film was Ruffalo's breakout role for a reason; in the family drama, the actor played the unreliable, immature brother of the film's lead (Laura Linney), who got away with his actions by charming the socks off of everyone he met. Even as Terry gave us a million reasons not to do so, the characters, and audience, just couldn't help but root for him.

Oh, Matty. The 13-year-old may have gotten picked on and been friendzoned, but it was hard to imagine his 30-year-old self having too many troubles. Reuniting with Jenna (Jennifer Garner), Matt was initially resistant, but as she wore him down, his grumpiness gave way to adorable likability. This was Ruffalo at his most charming best. I mean, RAZZLES.