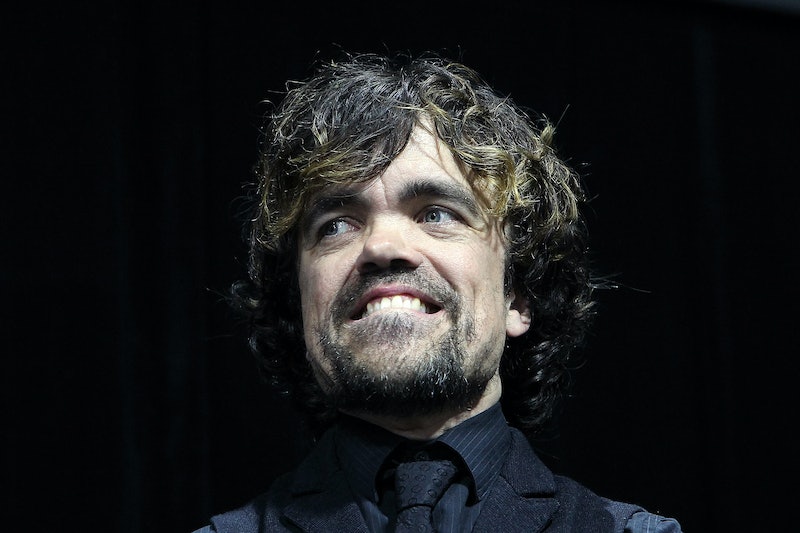 UPDATE: It turns out the Grumpy Cat and Peter Dinklage photo is a hoax. Apparently, someone just wanted to Photoshop Grumpy Cat and Dinklage into a picture together. According to Grumpy Cat’s rep (yes, Grumpy Cat has a rep) who spoke with Mashable, "She’s never met anyone from the [Game of Thrones] cast. She did the Iron Throne exhibit at SXSW and missed an actress by an hour. That’s the closest it’s gotten."

Sometimes, the Internet gives us a gift. This is one of those times, my friends. Behold: a picture of Peter Dinklage with Grumpy Cat. Yes, you read that correctly — Tyrion Lannister from Game of Thrones took a picture with one of your favorite animals from the Internet (and some guy in the background — high five to you, dude!).

This Dinklage and Grumpy Cat meeting was a long time coming. Grumpy Cat already took over the Game of Thrones Instagram account back in March, proving that cats not only rule the Internet, but they rule Westeros, too. (Maybe Grumpy Cat should be the one on the Iron Throne, hmm?) This phenomenal Instagram move pretty much destined the meeting of the real-life Tyrion and the very famous Grumpy Cat. And now... that wish has come true, and we have the opportunity to experience two of our favorite grimaces at once.

But, seeing these grimaces together has also made me think a little bit about Lannister family pets. Yes, I know it's a little too late considering that Tyrion is now running away after escaping jail and murdering both Shae and his father (on the toilet, no less), but wouldn't Grumpy Cat have made a great Lannister pet, especially since Ser Pounce sang his swan song (er, his cat meow) earlier in Season 4? LANNISTERS + CATS = LOVE. Anyway.

While that dream of mine will obviously never come to fruition, unless we get some kind of grand mash-up of sorts, we at least have this glorious image for now. And it's pretty freakin' great.

More like this
Gwendoline Christie’s Partner Is Part Of Royal Family History
By Parry Ernsberger and Sophie McEvoy
Does 'Locke & Key’s Ending Mean There Could Be A Season 4?
By Sophia Moore
Why Did Meatball Leave 'The Bachelorette'? His Second Chance Didn’t Last Too Long
By Grace Wehniainen
Memes & Tweets About Logan Switching From Rachel To Gabby On 'The Bachelorette'
By Grace Wehniainen
Get Even More From Bustle — Sign Up For The Newsletter