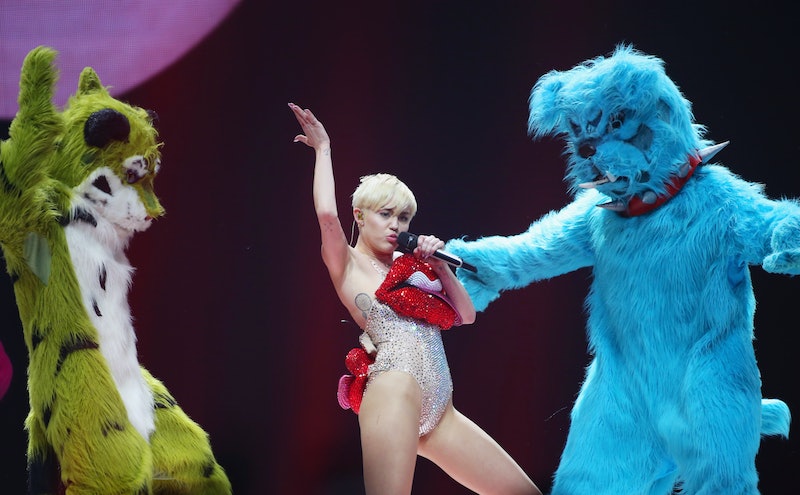 Last weekend, my girl Miley Cyrus introduced new puppy Emu to the world and yes, he is so precious that it's borderline disgusting. I ahh-dor-ore Emu (sorry I'm not sorry). (Also? That name is aces. I am all about naming a pup after another species of animal. My dream is to one day rescue two dogs and dub them Shark and Giraffe. Please don't steal my dream.) In the caption for the debut Emu Instagram pic, the pop star says she sensed Floyd the dog gave Emu his blessing. Aw, Miley! And a few posts later, Cyrus shared a pic of her altar to Floyd. AW, MILEY!

Of course Cyrus built a shrine in her pup's memory. She IS the gal who commissioned an enormous inflatable Floyd, after all. Lady loves her pooches.

Neither the inflatable Floyd statue (I wonder what happened to that thing. Is it still on tour? Will it wind up in Cyrus's backyard?) nor a bubblegum sculpture (Helga G. Pataki fan for life) made it into the tableau, but the shrine is a very sweet tribute to her beloved dog. And though I've never created a shrine/have limited shrine knowledge, it seems like a relatively normal shrine. A tasteful shrine. A shrine from the heart.

But I'd be lying if I said zero elements raised questions. I do have a few questions. Allow me to respectfully analyze the Floyd shrine now:

The Elements I understand

Bouquets of white flowers are the go-to choice for funerals, but why? What do white flowers represent? I couldn't remember, so I asked Google. According to the FlowerShopping website, white flowers mean purity and innocence.

Hm. Okay. But what about at a funeral and/or during a time of mourning? Per Signature Sympathy Flower Collection's website, white flowers represent peace, serenity, and purity. Ah!

They look like mini Floyds. I too have a Beanie Baby that looks like my old dog. I get it.

The Elements that make me ask “wait, why?”

Okay, fine. I'll go with it. Roll with the punches.

That "A SKELETON IN EVERY CLOSET" Wall Art

Hey, I'm not going to judge it.

Whatever That Squirrel Thing Is

Again, not sure if that thing is a part of the shrine...

Seriously though: What is that squirrel thing?