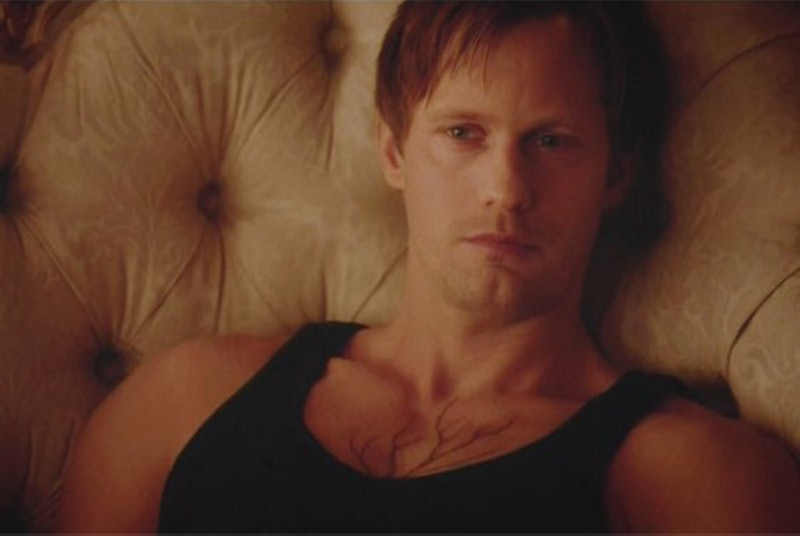 Well, that was mean. The writers of HBO's True Blood finally confirmed what fans of the show had fervently been hoping at the end of last week's episode, when Pam found Eric alive on Sunday's True Blood, despite the part where he seemingly burned to a crisp on a Swedish mountainside in last year's finale. But of course the writers just had to couple that happy revelation with a devastating bombshell: yes, Eric is alive — but he's also infected with Hep-V, a seemingly incurable vampire disease.

Lest we'd forgotten, this season is the campy drama's last, which means all bets are off. (Exhibit A: Tara's unceremonious off-screen death in the first five minutes of the premiere.) Could the writers really be preparing us to see Eric meet the True Death before the end of show? Or will he receive a Hail Mary eleventh hour reprieve? Sadly, there's no way for us to know yet, but that won't stop us from speculating.

Fortunately, thanks to HBO's press releases for the upcoming episodes, we know that Eric will survive at least through the sixth hour of the ten-episode season. The descriptions tell us that in True Blood's fifth episode, Eric and Pam "head to Dallas for a fundraiser," and in the sixth, the maker and his progeny will "forge an unlikely alliance."

So what's going to happen to Eric? And how did he come down with Hep-V in the first place? We've got a few theories:

Eric contracted the disease on purpose.

The reason Eric left Bon Temps and fled to Sweden in the first place was because he was so devastated by the death of his sister (and lover) Nora. She succumbed to Hep-V in his arms — perhaps he wishes to join her by dying of the same disease. This potential arc, of Eric making peace with his own death, would bring him full-circle with his maker Godric who met the sun of his own accord way back in Season 2.

Then again, if Eric really had a death wish, he could have just let himself burn up on that mountain. It seems illogical that he would save himself from that brush with death, only to seek out an incurable disease few days later. Could the mighty Eric Northman really have been brought down by an accidental sip on an infected Tru Blood? Seems too banal of a way for him to go.

Pam will bring Eric back to Bon Temps

Now that Pam has found her maker, there's two options of what she and Eric will do next. Either they'll return to Louisiana after Pam convinces him to help Sookie & Co. as one last noble gesture before he turns into a pile of goo or...

Pam and Eric will go on a road trip

Tired of humans and all their drama-with-a-capital-D, the pair will hit the road on their own, traveling the world together searching for a cure to Eric's illness. Of course, this being the final season, they'll still have to end up in Bon Temps by the finale. But who wouldn't love a little Eric/Pam spinoff-within-a-show in the meantime?

Eric will die a noble death

No matter what Eric and Pam get up to in the next few episodes, the question still remains: Will Eric meet the True Death? According to the show, Hep-V is incurable. Unless that changes (which is admittedly very possible), that means we should start preparing ourselves for a bloody-tear-filled goodbye. Hopefully the writers have enough respect for such a fan-favorite to give him a proper sendoff. It would be great to see Eric sacrifice himself to save Sookie or take down a villain, rather than, say, burning to death alone on a mountaintop.

Eric will live happily ever after

Alternately, in a "twist" that "no one" sees coming, Sookie and her faerie blood will turn out to be a cure for Hep-V and help save Eric from his imminent demise. Honestly, at this point on the show, a character could literally mumble "magicmagicmagic" and fix Eric and all the viewers would just go with it. We've experienced far weirder things. We just want to see Eric alive and happy when the show ends, ideally making sweet sweet love to Sookie Stackhouse. Alcide's too boring, Bill's too self-important, Sam's too in love with his pregnant girlfriend. If Sookie has to end up with anyone, it should be the blonde Viking. I mean, they just have the best chemistry, don't they?