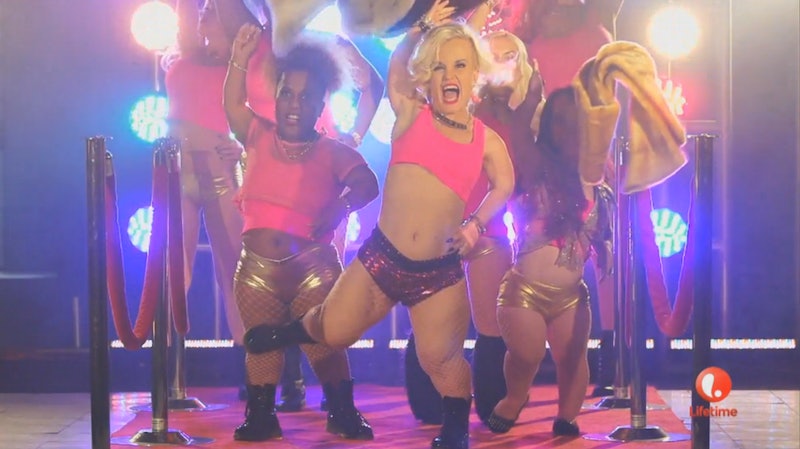 We have already seen her perform music by other artists, and now Little Women: LA star Terra Jole is trying to make a name for herself by singing her own songs for a change. And if you thought we were going to get through this season of Little Women: LA without somebody dropping a single, you were very, very wrong. This is reality TV we're talking about here. But it gets even better than that because we will get to see the filming of Terra's music video for her first single, "Booty Bee," during Tuesday night's episode. Isn't that nice of her?

From what we can tell from the preview of the episode, Terra wants her Little Women: LA castmates to star in the music video with her, but that goes about as well as you'd expect. Elena Gant seems hesitant to be in the video because she says she doesn't know how to twerk, which is odd considering she has impersonated Miley Cyrus in the past. And Terra accuses Christy McGinty of sabotaging her video, which was to be expected considering the two are not on the greatest of terms these days. Remind me why Terra wanted the ladies in the video with her, again?

The full version of the video for "Booty Bee" has already hit the Interwebs for your viewing pleasure, and there's enough rump-shaking going on to rival any hip hop video. Elena ends up appearing in the video, but there's no twerking to be seen with just a few shots of her posing. Terra's other Little Women: LA cast mates Briana Manson and Tonya Banks also star in the video, dancing alongside Terra, but they don't seem to be having too much fun. You can also see Terra's boyfriend Joe Gnoffo playing drums in the background. It looks like Terra was the only one who really enjoyed shooting this thing, but it's always good to be the star, after all.

"Booty Bee" is the name of Terra's alter ego (think Beyonce's "Sasha Fierce"). With lyrics rapped by Terra like, "Booty Bee has a booty that played an elf/Your booty looks like it ate an elf!" and "Booty Bee's crack looks tight in a thong/Your booty leaves skid marks six feet long," you may not think the song is going to win a Grammy anytime soon, but Terra is laughing along with you. She told OK! Magazine that the inspiration for her music is if "Andy Samberg had a baby with Lady Gaga." She also told the website what she wanted people to get out of the song.

I want to make people laugh and have a good time and still enjoy the song because that's my life. I try and not take things seriously and I try and be light-hearted on everything and one of those things that I've had a lot of focus on is my derrier[e] so I made a song about it.

So maybe it's not the greatest song and/or video in the world, but at least Terra knows that too and owns it. She has already recorded six songs and plans on releasing an album in the future. But no matter where Terra's career goes from here, you'll always remember the first time you heard, "Do the booty dance."

More like this
Kim K Is Putting Kanye’s Memorabilia — Like Grammys & Clothes — In A Vault
By Jake Viswanath
Julia Haart’s Husband Fired Her As CEO Of Elite World Group
By Brad Witter
What Jen Shah's Delayed Sentencing Could Mean For The 'RHOSLC' Season 3 Reunion
By Brad Witter and Jake Viswanath
What Is Julia Haart’s Net Worth? The My Unorthodox Life Star Is A Shoe Mogul
By Radhika Menon
Get Even More From Bustle — Sign Up For The Newsletter