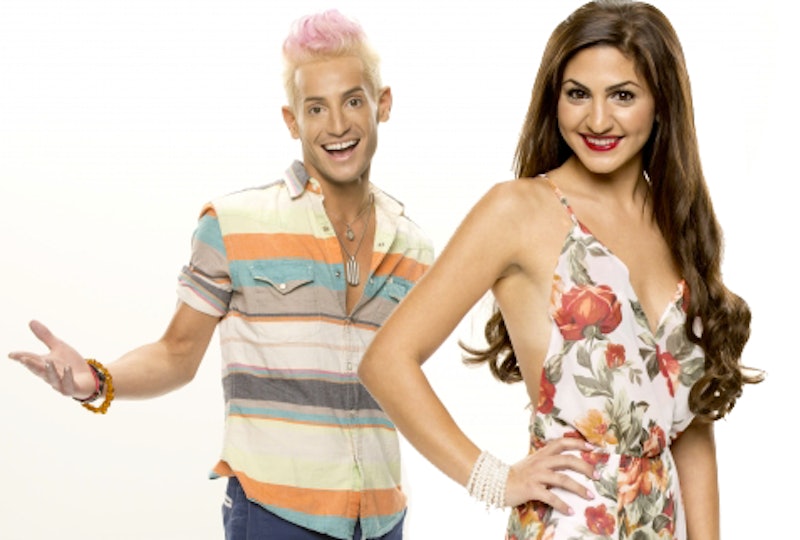 It's only been three episodes of Big Brother and we've already seen the rise and fall of another cast friendship. This particular one was between Frankie Grande (Did you know Frankie Grande is Ariana Grande's half-brother? Shh, don't tell the rest of the cast!) and Victoria Rafaeli, who entered the house along with the second wave of eight house guests. Frankie and Victoria were two of the pairs that bonded right away — like Christine and Nicole or Devin and whoever Devin happens to be working with at the moment — and they immediately promised to look out for each other. So you can imagine my surprise, and Victoria's surprise, during Sunday's episode of Big Brother when Frankie nominated her for eviction, a betrayal that Victoria is not going to take lightly.

The real tragedy of this twist is the fact that Victoria was so sure that she was safe. She spent Sunday's episode sighing happily over the fact that Frankie was one of the Heads of Household, because, as his friend, that gave her access to the gorgeous bathroom in his room and meant that she could be assured that she was safe for this week. When Frankie nominated her for elimination, even though he tried to explain that he and Caleb were simply picking people who had fallen first in the two competitions thus far, Victoria was not having it.

"The first night that we stepped into this house, Frankie pulled me aside and said, 'we're working together and I love you, I need you in this game and blah, blah, blah'," said Victoria to the camera after Frankie dropped the nomination bombshell. "Yeah, right. Shove that you know what and you know where."

Meanwhile, Frankie did his best to try and convince Victoria that he was the innocent party in her nomination and that Caleb had stolen the people that he had intended to nominate — complete with a wink at the camera when he proclaimed said innocence — so it's hard to tell how much of his guilt over selecting her was genuine and how much of it was just for show. How could their friendship have broken down so quickly? Well, this is Big Brother, after all.

Victoria is currently left floating after proving herself in the competition and sending Donny and Paola to the chopping block, but Frankie has already moved on to greener pastures in a bromance with Zach Rance, of all people, that has fans' eyes glued to the live screen and affectionately dubbing it "Zankie". In fact, fans are currently convinced that "Zankie" is going to be the show's first showmance, rather than housemates Caleb and Amber.

There suspicions aren't exactly unfounded. Fans who have been watching the live feeds obsessively for Zankie moments were there to witness a conversation between Brittany Martinez and Cody Calafiore in which Cody essentially confirmed that Zach is attracted to Frankie. While Frankie's feelings remain unconfirmed — if you take Cody and Brittany's gossip as enough confirmation for Zach — the fact still remains that the two of them have been spending a lot of time together on the live feeds now that Frankie and Victoria have essentially friend-dumped each other.

Will Frankie and Victoria find their way back to each other before one or both of them gets evicted? So far, it's looking pretty unlikely. This was a really huge betrayal on Frankie's part and Victoria's got something to prove to him, to the other house guests, and to the world. No enemy is more dangerous than the one who was once your friend, so Frankie had better watch his back now that he's put himself in Victoria's bad books. Frankie and Victoria were a nice team for the two episodes that they lasted, but now it's time to look ahead to the future. And the future is Zankie.

More like this
Oh, How The Tables Have Turned On 'Love Island'
By Victoria Sanusi
The Week 'Love Island' Turned Into 'Disrespect Island'
By Victoria Sanusi
Tamra Judge & Vicki Gunvalson Gave A Hopeful “Tres Amigas” Update
By Brad Witter
RHOA’s Kenya Moore Said Her Friendship With Marlo Hampton Is “Too Far Gone”
By Brad Witter
Get Even More From Bustle — Sign Up For The Newsletter