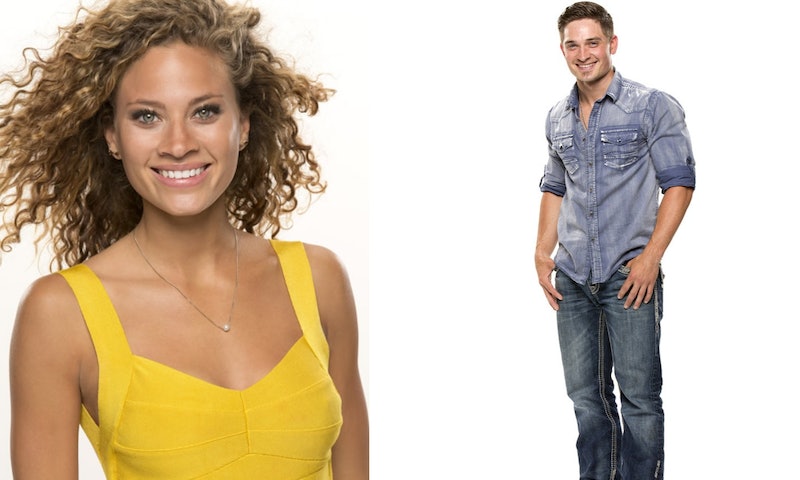 This season of Big Brother is all kinds of crazy: It's got Instagram drama, Ariana Grande's brother, and TWO heads of household stuffed into an urban treehouse. There's also a possible showmance blossoming between contestants Caleb Reynolds and Amber Borzotra. At least, a one-way showmance. Ah, young (nationally televised) love.

Caleb seems to have it bad for Amber in a way that can't possibly be fake. He's telling other housemates about his feelings, entertaining ideas about a long-distance relationship, even going so far as to say he'd bring her home to his parents. If that's not a genuinely insane, obsessive, and very real crush, I don't know what is.

We have reason to believe that somehow, someway, Amber and Caleb might actually be a real thing, and have potential for a Maks-and-Cheryl-level, real showmance. Okay, so Amber doesn't have any interest in the contestant — he's not her type — but, still, what is Big Brother without a showmance? Though we can't say Caleb's the most, well, high-quality choice for wholesome Amber, let's make believe that this will go down as one of the the greatest reality TV showmances we've ever seen.

Amber and Caleb, sittin' in a tree... house. Here is how I imagine their televised relationship will go down:

...and she's making Caleb work for it.

Their cuteness makes everyone in the house roll their eyes

She shows off for him

She somehow still likes him.

They give each other secret looks from across the room:

She's in it to win it

Okay, okay — so he's basically this season's answer to GinaMarie Zimmerman (and her unhealthy obsession with fellow houseguest, Nick).

But was it wrong for me to hope for something new this Big Brother 16?

More like this
What You Need To Know About Applying For ‘Big Brother’ 2023
By Sam Ramsden
This 'Big Brother' Legend Is Tipped To Host The ITV2 Reboot
By El Hunt, Maxine Harrison and Sam Ramsden
Everything Jarrette & Iyanna Have Been Up To Since 'Love Is Blind'
By Brad Witter
Indian Matchmaking’s Viral Revealed A Major Clue About Her Relationship With Aashay
By Radhika Menon
Get Even More From Bustle — Sign Up For The Newsletter