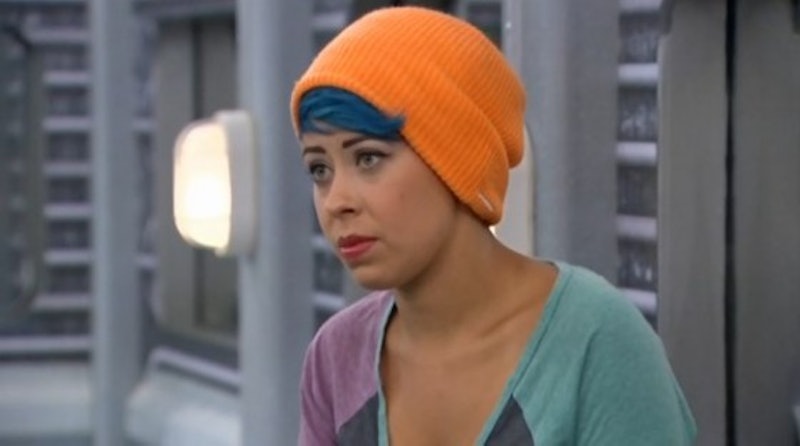 It is only a matter of time until contestants break in the Big Brother house. The conditions are so tough, deserted on an island, boiling water so it is okay to drink, and scraping rice off of pans to have something to eat for that day. Oh, wait... that’s Survivor. The Big Brother contestants get to sit in a beautiful, nature-themed house for the summer and lay out by the pool to get their tan on. But hey, we all have our demons. The first to crack (shockingly) wasn’t Devin Shepherd, the nonstop talker who invited basically the entire house into the bomb squad alliance. Instead, Seattle-based makeup artist/hairstylist Joey Van Pelt has exploded.

It all started when Donny Thompson, who was the most likely first evictee of the game, removed himself off of the block (proud of you, Donny!). Whenever an intended evictee comes off the block, it causes the house to scramble to find a replacement. Well that replacement was Joey, and she was not happy. The house started to consider back-dooring her, and keeping Paola Shea safe for the week.

And that’s when it happened.

It all started when Joey told Devin that she had “cracked the code” of the Big Brother game and was ready to use her new found knowledge to win. Well, okay, the confidence is there, but is there actually any substance to this master theory? No, there isn’t. The current HOH, Caleb Reynolds, let Joey know that she would be replacing Donny on the block, because it's what the house wants. I am kind of tired of this whole, “let’s poll the house” thing the players are doing this season. You’re their to win $500,000, not run for treasurer of your middle school, who cares what the entire house wants.

Well, that news didn’t go over too well with Joey. In the honor of doing everything as a house, Joey called a house meeting and told all of the houseguests that Caleb was polling the house to see who the renomination would be, and she wanted to make sure everyone got their vote in, so it was "fair."

It gets better, I promise. Joey then decides Devin is her target for the renomination and she tells him so. Is nothing sacred in this game? First, alliances are exposed to the entire house, then you go around telling people you’re gunning for them? So, in an attempt to save herself, Joey starts to throw around the Team America twist, and how crucial it is for her to stay in the game, so she can use this magical power bestowed upon her by America. Again, is nothing sacred?

Last night was really Joey’s breaking point. According to BigBrotherLeak on Twitter, Van Pelt began running around the house dressed as a guy named “Alex” (?) screaming the following.

Will you be sad to see Team America fizzle like the Fourth of July fireworks? What do you think it will mean for the twist? My bet is that Frankie Grande gets pulled into this somewhere along the line.