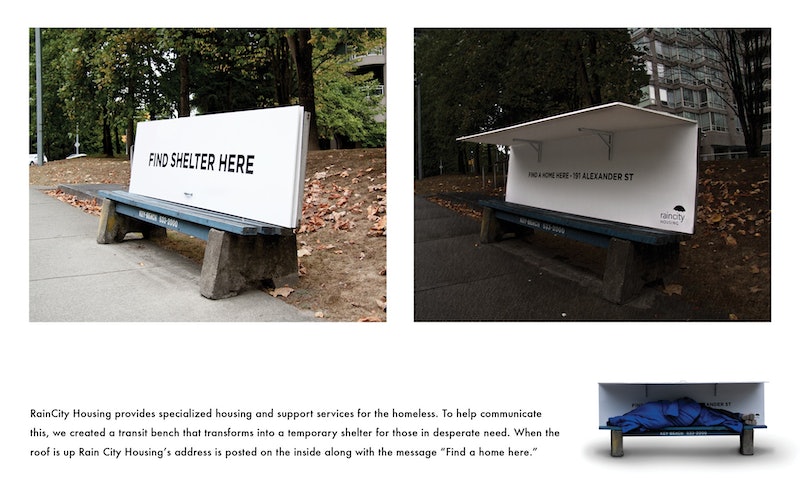 We all remember that luxury apartment building in London bordered by anti-homeless spikes to prevent the homeless from loitering on the property. Now, Vancouver, Canada has outdone itself in providing the opposite: Along with Spring Advertising, Vancouver nonprofit RainCity Housing installed modified public benches, with the goal of raising awareness and providing shelter for the homeless. RainCity designed two types of modified benches.

The first of their benches had a back section that could be converted from a backrest into an overhanging cover, and listed the address of RainCity Housing, where the homeless can find additional assistance. The second type of bench was created mainly to raise awareness and had text that during the day read, "THIS IS A BENCH," and at night, said in glow-in-the-dark font, "THIS IS A BEDROOM." In this way, the impact of the project was two-fold — providing physical assistance and raising awareness through a campaign. On the Spring Advertising website, a blurb reads:

RainCity Housing provides specialized housing and support services for the homeless. To help communicate this, we created a transit bench that transforms into a temporary shelter for those in desperate need. When the roof is up, Rain City's housing address is posted on the inside along with the message, "Find a home here."

The bench project isn't a new initiative. In fact, the campaign was created last fall, but received little media attention at the time. Most of the benches have actually since been removed.

But after the upsetting reports of anti-homeless barriers in London, and Montreal too, people are looking for happy alternatives. Both London and Montreal's spikes, meant to prevent loitering, sitting, or sleeping on the sidewalk, received much-warranted criticism, and sparked a conversation about solutions for homelessness.

In contrast to the upsetting news from London and Montreal, the Vancouver benches provide an uplifting alternative. It's great to hear about an initiative that doesn't seek to hurt, repel, or ignore the homeless, but, instead hopes to provide shelter and help in any way possible.

In an email exchange with The Huffington Post, Spring Advertising's Creative Director Rob Schlyecher said, "Simply put, our society cannot expect homeless people to just go away. They need a safe place to sleep and a base from which to stabilize their lives." Tell it to London and Montreal, Schlyecher. They need to hear it.

More like this
6 Organizations Fighting Police Brutality That You Can Support Right Now
By Syeda Khaula Saad and JR Thorpe
How To Help Those Affected By The Turkey-Syria Earthquake
By El Hunt
This Is When Netflix Is Going To Start Charging You For Sharing Passwords
By Darshita Goyal
15 Black-Owned Liquor & Wine Brands To Add To Your Bar Cart
By Alexis Morillo
Get Even More From Bustle — Sign Up For The Newsletter
From hair trends to relationship advice, our daily newsletter has everything you need to sound like a person who’s on TikTok, even if you aren’t.