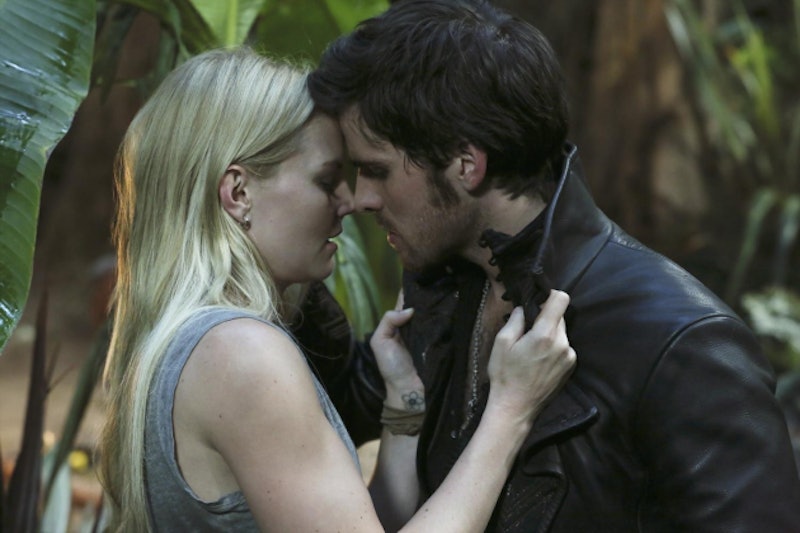 Shippers, rejoice: Captain Swan is officially a thing, and it's all thanks to the epic Season 3 finale of Once Upon a Time . After a (mostly) lackluster third season, the writers brought back the "magic" of Season 1 with a finale that literally brought the characters back to that beloved time in the show's history. Hook and Emma time traveled back to the beginning of Snow White and Prince Charming's grand romance, and in doing so, ignited the flame that's been waiting to burn between the savior and the pirate since their very first encounter. (Yay!) The two kissed at the end of the finale, solidifying the fact that Hook and Emma are finally ready to move into a romantic place. Of course, like anything and everything on Once Upon a Time, their new romance won't be as easy as it appears.

Regina could very well play a part in the downfall of Captain Swan. According to TVLine, Emma's "guilt" over inadvertently bringing Regina's new boyfriend Robin Hood's wife back will gnaw away at the savior — and it may pose some challenges for her future relationship with Hook. Let's not forget that the mayor of Storybrooke used to live by a mantra focused on destroying others' happiness. Though Regina has turned over a new leaf and revealed that she's more good than we ever expected, there's still a chance that she'll be the one to bring down this new relationship — whether or not she intends to. Here's how Regina could throw a wrench into Hook and Emma's new relationship —though we're all hoping that she doesn't.

I really want the Once Upon a Time writers to acknowledge how far Regina has come since Season 1, but even I remember how cruel Regina was as the Evil Queen. She did more than just break up romances and force Snow White to bite a poisoned apple that put her to sleep — back when Regina was the Evil Queen, she thought nothing of murdering an entire village who didn't obey her every command. And why was Regina so evil in the first place? It was because she lost the great love of her life, Daniel. Now that Regina has lost her second great love, those evil tendencies might come rushing back. There are many ways for Regina to get back at Emma and Hook, but, if it's anything like last time, I'm thinking that some sort of curse would do the trick...

Emma Will Break Things Off Out of Guilt

Emma had the best intentions when she brought Marian back, but, clearly, things didn't work out so great when she returned to the present. As the spoilers suggest, Emma will feel incredibly guilty over what she did to Regina. Could she punish herself by ending her new relationship with Hook?

Emma and Hook went back in time using Zelena's magic, so we know that it's now possible in the OUAT world. There are two possibilities with this situation. The first — and more likely — scenario is that, as an act of vengeance, Regina uses time travel to bring back the deceased love of Hook's life. (Who just happens to be Henry's grandmother, because everyone on OUAT is connected to Henry.) Hook would then have to decide between reuniting with his dead love or continuing to grow the spark between him and Emma. The second possibility? That, in an act of weird, cosmic karma, Regina has to bring back Henry's grandma for some bizarre, magical reason — the outcome is the same, though the latter does level the playing field a bit between Henry's two mothers.

I really hope that Regina can remain firmly on the side of good next season, and that she doesn't have a hand in breaking up Hook and Emma's newfound love. If she does intentionally sabotage this adorable romance, well, tack that title back on — she'll truly be the Evil Queen once again.

More like this
“The Door Is Always Open” For Another 'Breaking Bad' Spin-Off, Says AMC Boss
By El Hunt
Emma Thompson, Lashana Lynch, & Stephen Graham Lead Netflix’s 'Matilda'
By Sophie McEvoy
The ‘Love, Victor’ Showrunner Gave Fans Hope For A Possible Spinoff
By Brad Witter
Legacies Showrunner Said There Is Still Hope For More Vampire Diaries
By Gretchen Smail
Get Even More From Bustle — Sign Up For The Newsletter