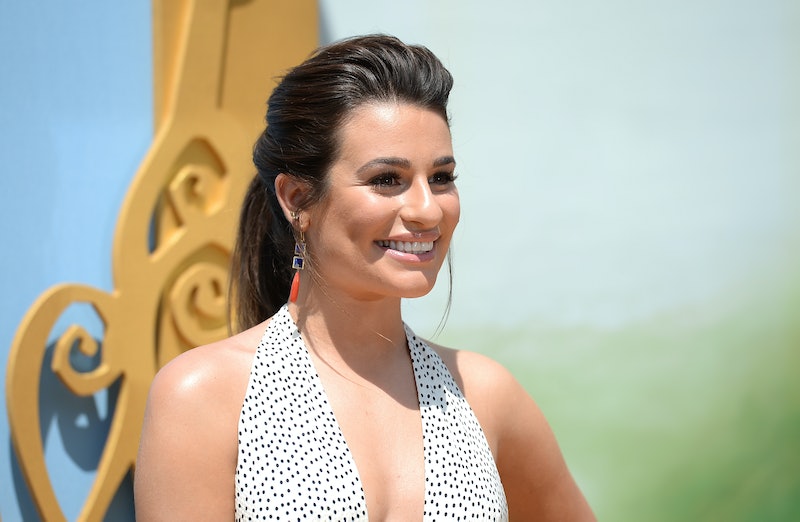 Hold onto your helmets, William McKinley Titans, because Rachel Berry, a.k.a. Glee diva, Lea Michele, has a brand-new boy toy. It's been a longtime coming for the vocally #blessed actress, 27, who lost her boyfriend and Glee co-star Cory Monteith nearly a year ago to a tragic drug overdose, and, until recently, had yet to dive back into the dating pool. Instead, she's been busy focusing on her sure-to-be-successful memoir, Brunette Ambition, absolutely slaying on the latest season of Glee, and whipping her hair back and forth for L'Oreal. Talk about star power.

But as with any PYT in Hollywood, dating rumors continue to swirl around young starlets no matter what they're doing on screen. None surrounding Michele had gotten any traction, until whispers that the actress had been stepping out with a rumored new man for weeks began to pile up. The mysterious hunk in question? Matthew Paetz, an aspiring actor and model who reportedly cozied up to Michele on the set of her new video "On My Way" in April, and snagged the world's attention thanks to a questionable background as a gigolo.

Deuce Bigalow comparisons aside, the whole thing seemed a little fishy. Of all the eligible bachelors out there, a former male escort definitely wouldn't be our number one choice for Michele. Still, a source close to Michele maintained to People magazine that, "For a long time, Lea wasn't close to even thinking about getting into a relationship. Cory's death was and will continue to be a struggle for her." After months of dodging questions about the newfound love in her life, it looks as though the couple's summer romance has finally been all but confirmed.

Michele was spotted hiking in Burbank, California with Paetz in (wait for it) MATCHING sneakers, which is pretty much a public declaration of love.

Before you go into a Gleek-fueled tizzy about all of this, here are the basics everyone should know about the new guy before anyone gets too attached.

1. Paetz is a "dating and lifestyle" coach, whatever that means.

According to Paetz's Twitter page, he spends his time in Los Angeles working as a dating and lifestyle coach, and tweeted out some of his views on the subject.

2. He can be there for Michele at a moment's notice.

Relationships are always easier when your significant other is there to dote on you 24/7, and Paetz lives in Los Angeles near Michele.

Judging from the reading material he tweeted out earlier this year, Paetz doesn't exactly fit the stereotype of a vapid model.

4. He's no stranger to showbiz.

5. He has great taste in girlfriends.