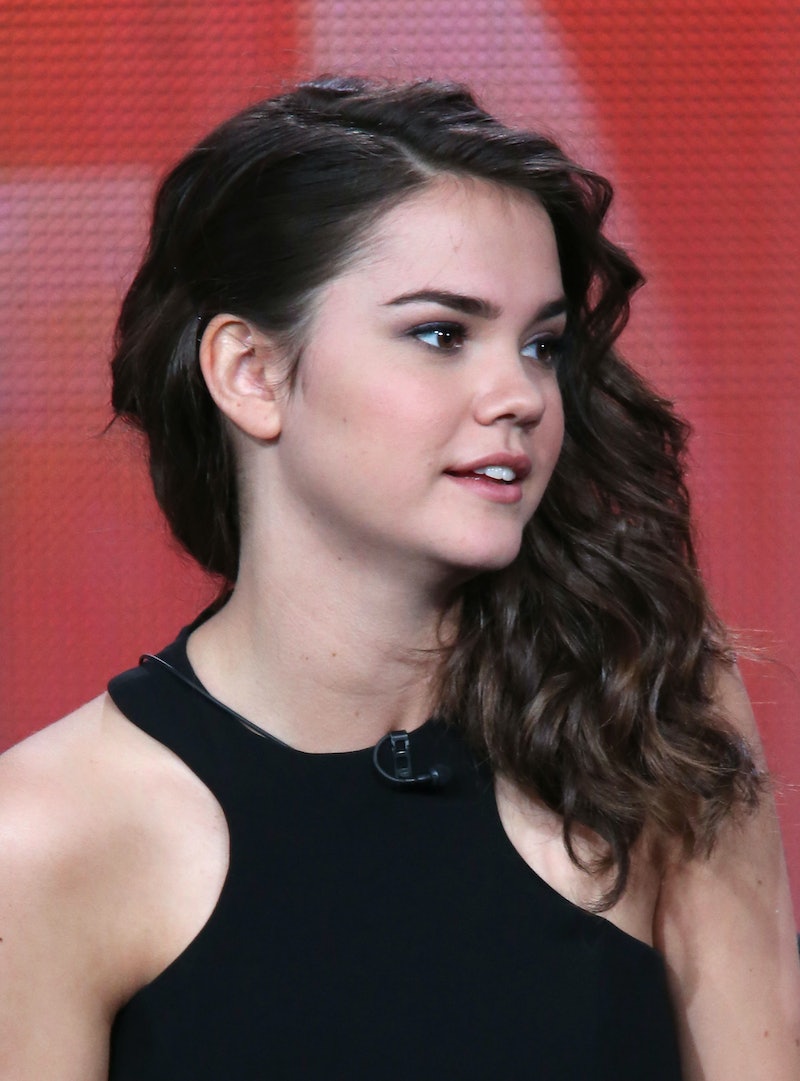 With the undoubtable success of The Fault In Our Stars, it's time for the world to gird itself for several more years of news cycle saturated by the work of John Green. Looking For Alaska is trying to land Sarah Polley as screenwriter/director over at Paramount, and Paper Towns will retain many of The Fault In Our Stars' top producers, as well as bringing Green on as a producer. Paper Towns has also already cast The Fault In Our Stars supporting player Nat Wolff in the male leading role of Q — but it still needs its leading lady. Which is why we'd like to propose The Fosters' Maia Mitchell as our Margo Roth Spiegelman.

We're not producers, or directors, or casting assistants: In every official capacity we have absolutely zero say in this decision. They could cast Paris Hilton as Margo and all we'd really be able to do is write a bemused blog post about it. But we also watch copious amounts of media and read copious amounts of things, and that has led us to our deep conviction that Maia Mitchell — like Teen Wolf's Dylan O'Brien with Looking For Alaska — should at the very least be up for this role.

Paper Towns will be a difficult movie to make. Though The Fault In Our Stars does traffic a lot in metaphor, Paper Towns leans perhaps even more heavily on things like theme and perception — more so than it leans on the actual linearity of its plot or its side characters. Essentially a deconstruction of the Manic Pixie Dream Girl trope, the entire story revolves around two characters: Q, the perceiver, and Margo, the perceived.

And so it wasn't a big surprise when the studio cast Wolff as Q before they'd even found a Margo: Wolff was right there already with The Fault In Our Stars, and Margo is a very tricky role to cast. She's effervescent on the surface and nihilistic underneath — she has to be seen by her peers as nothing but this beautiful, enchanting mystery, imaginable but, as the novel itself puts it, "consistently misimagined." Basically she has to burn an entire trope to the ground with nothing but a screenplay, some direction, and her face.

It's important to remember one of the book's most circulated quotes when thinking about Margo:

When I first read Paper Towns a few years back, there was only one Margo I would have accepted: Parenthood's Mae Whitman, with her thoroughly underrated, nuanced portrayals of teen angst. At 26 she has, unfortunately, mostly aged out out of the role. But Maia Mitchell has not.

Watching Mitchell play Callie Jacob on The Fosters, it's clear that she has that thing Mae Whitman has, and that thing that, for example, Sarah Michelle Gellar had on Buffy the Vampire Slayer. It's that sort of toughness, but with performances nuanced enough to let you see all the cracks in the exterior. It's wounded, but defiant, and not at all pathetic. It's vulnerable, but complex — it's flexibility, with depth. And Margo Roth Spiegelman will live and die on her portrayer's ability to show us that complexity.

Now, the people behind Paper Towns — which doesn't even include an announced director yet, so we're a little ahead of ourselves — could bring Mitchell in for an audition and it could just not go well. They could, like they did with Shailene Woodley for The Fault In Our Stars and Jennifer Lawrence for The Hunger Games, go with someone closer to breaking out. It's entirely possible it just won't work out. But we've got to shout her name out into the ether for this role, because Margo Roth Spiegelman deserves the kind of complexity Mitchell's brought to Callie Jacob. The Fosters is an ABC Family show — she could get away with being a lot less good than she is. And hey, Shailene Woodley started out on ABC Family, too.

I'm psyched for more Paper Towns casting announcements no matter who our Margo turns out to be, with the possible exception of Paris Hilton. But sometimes it's fun to get in their early and have someone to root for, and it's not hard rooting for Maia Mitchell.

More like this
The Biggest Differences Between 'Bullet Train' & The Book It’s Based On
By Arya Roshanian
'The Simpsons' Will *Finally* Address How They “Predict The Future”
By Sam Ramsden
The Bestselling Novel 'The Doll Factory' Will Be Adapted Into Thrilling TV Series
By Catharina Cheung
The 'PLL: Original Sin' Creators Say A’s Identity Will Be “Very Clear” By The Season Finale
By Alyssa Lapid
Get Even More From Bustle — Sign Up For The Newsletter