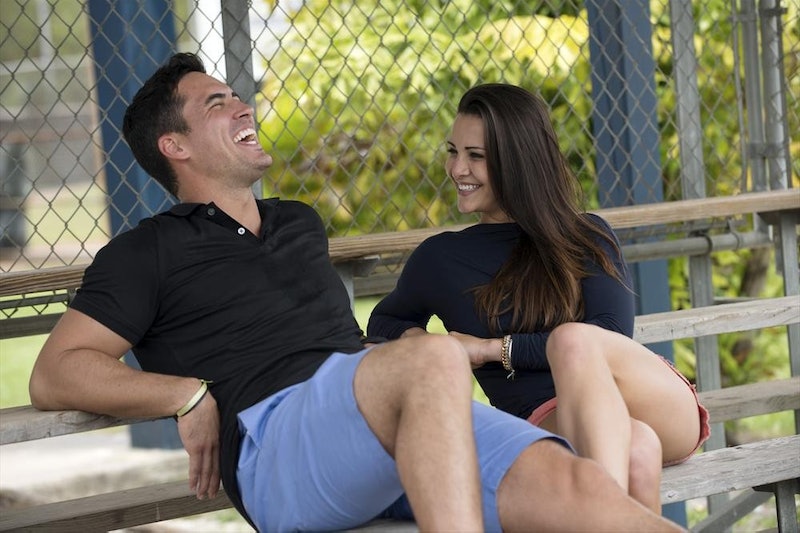 For months now, I've railed on Josh Murray and his worthiness of The Bachelorette Andi Dorfman. After all that, it seems like I'll be eating my words. During his hometown date with Andi, Josh delved into his baseball past and opened up in a way that could melt anyone's cold, cold heart.

Throughout the competition, Josh has seemed a little immature (see: that time he pouted because he didn't get to hang out with Andi), a little superficial (see: the way he was obsessed with Andi before he even had a real date with her), and a little obsessed (see: everything he's done on this show). But now that he's been taken out of the ridiculous courtship rituals of The Bachelorette and into the comfort of his parents' home in Tampa, Josh is actually starting to look like a lot more of a catch. He's not just a handsome jock with a smile so big and bright, it could blind a toddler. He may just be the real deal. Did anyone else catch those crocodile tears and, almost more importantly, the way he greeted his adorable dog Sabel? It's hard to hate on someone like that.

Then there's Josh's family. Even if Josh isn't all he's cracked up to be, he's got a young sister who's mature and has a good head on her shoulders, a brother who's skyrocketing into the NFL, and two parents who are so supportive they make Coach and Tammi Taylor look flippant. Josh is great, but his family may have just sealed the deal.

Of course, this hometown date also solidified an incredibly important part of this entire equation that I've been trying to ignore for weeks: the sheer chemistry between Andi and Josh. While she's got similar chemistry with Nick Viall, there's a sense of urgency with Josh that makes you question her bonds with the other guys. Andi may be a kisser, but there's just something more going on with Josh (even after Marcus got totally naked in some accidentally see-through tightey whiteys on his hometown date).

If Josh wins, I suppose I won't lead a revolt in the streets. I guess.