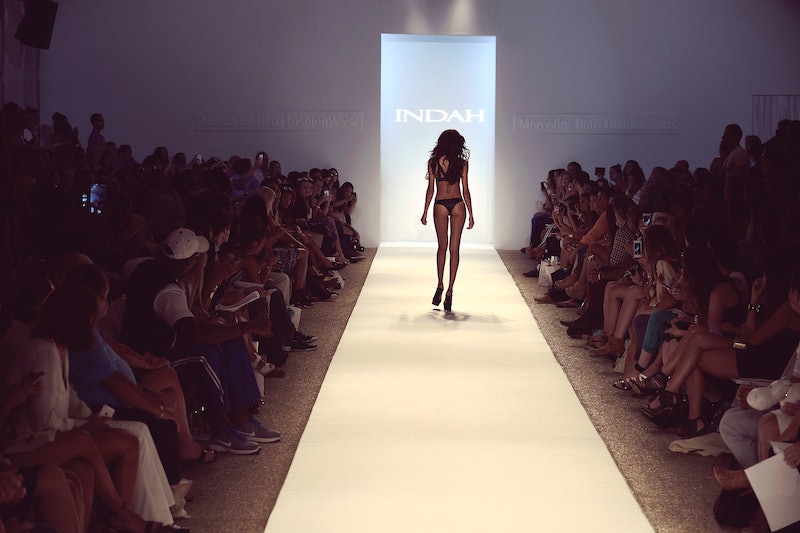 A good friend of mine recently told me how he feels fashion doesn't affect him. We were sitting at a bar in Williamsburg, and he had just commented on my outfit, a pair of leather tap shorts paired with a chambray button up and statement necklace, all of which were, in his mind, too dressed up.

"I don't know, dude. Fashion just…I don't get it," he said in a tone that wasn't rude but wasn't exactly nice, either.

Before I could tell him how much it bothers me to be called "dude," he continued. "Fashion is just, I mean, it's kind of dumb. It doesn't affect my life at all." There is was. He had just said what so many people tacitly say when they they roll their eyes at fashion week, or mock $2,000 jackets, or imply ever so kindly that "fashion people" are vain, materialistic creatures.

True, yes, my friend likely hadn't put much thought into his Hanes t-shirt and blue jeans, but that doesn't dismiss him from being affected by fashion. The truth is, fashion affects everyone, even those who aren't flipping through Vogue each month.

When you think of defenses for overpowering influence of the fashion industry, you might think of Miranda Priestly's speech about blue sweaters in The Devil Wears Prada. After Priestly's assistant Andie (Anne Hathaway) scoffs at a belt, Priestly lets loose on her, saying, "That blue represents millions of dollars and countless jobs and it's sort of comical how you think that you've made a choice that exempts you from the fashion industry when, in fact, you're wearing the sweater that was selected for you by the people in this room."

She's not wrong. The fashion industry is a pyramid structure, and even if you have no clue who Oscar de la Renta or Karl Lagerfeld are, you've likely been affected by their ideas and designs. Still, Priestly's point is just the tip of the iceberg. The reason fashion affects nearly every single person has little to do with the trickle down effect of high fashion to fast fashion and more to do with how dress acts as communication, both intentionally and unintentionally.

Through clothing and accessories, people are able to play with associations. For example, if you were to wear a pair of colorful chinos, a J.Crew button-down, a cardigan tied around your shoulders, and boat shoes, my first thought wouldn't be, "Oh. They're probably going to go on a boat." You're not wearing that outfit because you need the traction of a rubber sole or because it might get chilly on the yacht. That outfit does not evoke you hitting the high seas. Or maybe you're not dressed in boat shoes and chinos. Maybe you're wearing a Supreme snapback, wedge sneakers, and an Alexander Wang tank top. Or maybe you're wearing red lips, blunt bangs, and a '50s style dress adored with printed birds. The point is, each of these carefully planned outfits send signals up to the brain, telling the people who you meet about your financial status, interests, personality, and background. This is semiotics. These are the building blocks of cognition.

Because we do not pick out of a hat to decide what garment we will be wearing, we can assume that each person has chosen the clothes they're wearing deliberately. Just like any other choice, this reveals and communicates many things about the person doing it. Of course, most people don't make these choices outwardly; as we get older and become more comfortable with ourselves, we're less likely to say, "I want people think I'm a free-loving, easygoing child of the '60s, so I'm going to shop exclusively at Free People." We just subconsciously understand the ideas and values we want to convey, and dress accordingly. Someone who dresses very simply, in just "blue pants" and "white shirt," as if they really and truly have no idea that there is more than one style of pants and shirts available, is communicating just as many messages as someone in a paisley printed shirt and lime greens pants. The message is different, sure, but it's just as salient: "I am a person who doesn't care about clothing. Looks and dress are not important to me. They are not part of my value system." Pretty powerful, don't you think?

No, the majority of us don't plot strategies for our day-to-day outfits. However, most people do take advantages of the cognitive cues associated with certain clothing items at one point or another in their life. We do this mostly for special occasions — job interviews, dates, the party where you just know your ex is going to show up with his new girlfriend, and we do so in two different ways: by appealing to nurture and learned cues and by appealing to one specific person or a small, specific group of people.

Appealing to nurture has to do with understanding near-universal associations with clothing. For example, if you were to apply for a job at a law firm, you're more likely to show up wearing a black pantsuit than a printed romper. The more you can pinpoint these associations, the more powerful the overall image you're trying to convey will become. Even if you don't have an interest in fashion, it might benefit you to understand how people affiliate certain brands or styles with personality traits. It's a risky game, though. These associations aren't universal; they're near-universal, which is an important distinction. While one person might see a Rolex watch as a symbol of power, wealth, and assertiveness ("They would be a great asset to my company."), someone else might connect a Rolex to greed and flamboyancy ("I don't want someone like that on my team."). The person making these judgements likely doesn't understand that such powerful thoughts are hinging on a timepiece.

The second way to play with associations — and this way is distinctly less risky — is to appeal to one specific person or a small, specific group of people. In order to do this, you need to understand the cognitive cues that person or people respond to. For example, if you wanted to impress your boyfriend, and you know he's a huge Aubrey Hepburn fan, you might wear black cigarette pants, a white stripped shirt, bold eyebrows, and red lips. Dress is costume, and costumes are powerful.

Because there is a an undeniable element of exclusivity to the fashion world many people assume they are except from that world affecting theirs. However, fashion doesn't only influence the lives of those buying $5,000 jackets. Maybe you have no interest in F/W or S/S and maybe you think Givenchy is pronounced with a hard G. The truth is, it doesn't really matter if you have an interest in fashion. Fashion has an interest in you. It affects you and everyone around you by permeating each of our lives in a myriad of different ways. The term "fashion" has been reduced to runways, and editorials, and style blogs, but those are merely the superficial, painfully simple components to the industry. The way we dress — fashion — is one of the most powerful and effective tools we have to communicate all the thoughts, values, and ideas that we encompass.