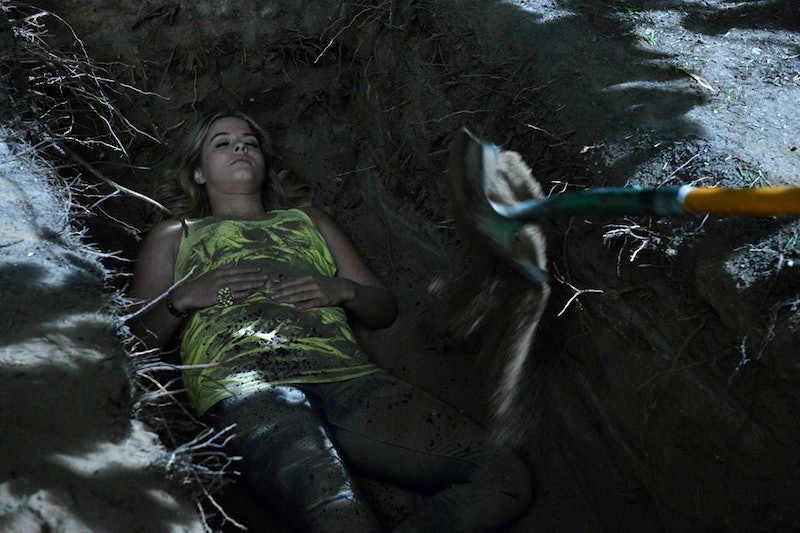 Well, now we can put a name to that corpse — even if we still don't know who killed her. Pretty Little Liars 100th episode aired on Tuesday night and there was a lot of discussion about bodies. Mrs. Hastings is convinced that Mr. Hastings and Melissa killed Jessica DiLaurentis and PLL fans finally got an answer to a question that's plagued us since we found out that Ali is alive: Who's buried in Alison's grave? Well, here it goes — her name is Bethany Young and no, she's not that other girl that went missing around the same time as Alison. So, who the hell is she?

In true PLL fashion, this answer came with a handful of questions attached. The main one being, "Who is Bethany Young?" as we scrambled to search whether or not she'd been mentioned on the show before. Well, she hasn't, at least not until Tuesday night. Which takes us one giant step farther away from figuring out who "A" is because PLL fans have to theorize about yet another murder. Sigh, always with the run-around, I. Marlene King.

The only bit of information we learned about Young is that she was a patient at Radley that escaped and was presumed missing around the same time as Alison's disappearance. Thank you, Rosewood Police Dept. for being wildly unhelpful as per usual. But, with that tiny bit of information, here's three theories about how Bethany Young is connected to PLL:

Allie's twin, Jason's twin, Jenna's twin — even though PLL has tried to tell us time and time again that that particular plot point from the book series won't factor in to the show, we're searching for it. Earlier this season fans became convinced that Mrs. DiLaurentis, Jason, and Mr. Hastings were all trying to protect Jason's twin sister. And it's still possible — even though, again, we've been told that twins aren't happening. It's unlikely that PLL is trying to pump-fake fans, but with its track record, we can't rule the Twin Theory out entirely. Ever.

Is anyone a little creeped out by this Sydney girl that's sniffing around Emily? I know, on Tuesday's 100th episode that fans found out that she's working with Mona and Jenna (they also look like they might be related). But even before that it seemed like too much of a coincidence that she turned up and starting hanging around right when Alison returned. Is Bethany related to Sydney? And does her emergence have anything to do with the fact that the police just figured out who was really buried in Alison's grave? Something is fishy here.

Well, we can't trust a Hastings. What if Bethany Young were a secret Hastings — apparently Spencer's parents have been in on a big secret since before Melissa and Spencer started sniffing around. Could this girl be a long, lost third sister, who died tragically around the same time as Ali disappeared? It'd be enough to prompt that alliance between former lovers Mrs. D and Mr. Hastings — perhaps the person who tried to kill Ali and the person who killed Bethany aren't the same person and we're looking at an even more extensive cover-up than fans planned for? It'd also fit in pretty seamlessly with the "Jason Has A Twin" Theory — think about it.