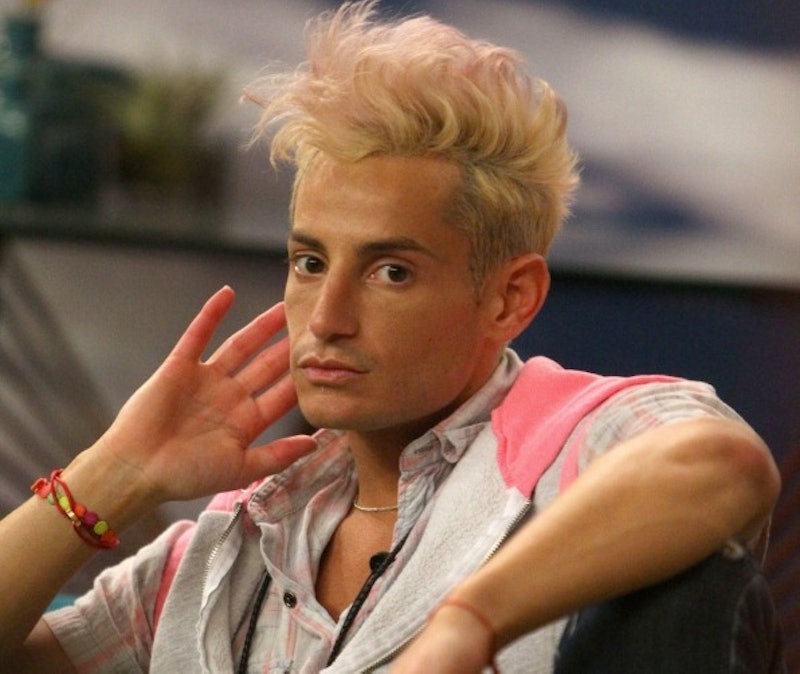 Battle lines have temporarily been drawn between Devin and Caleb in the Big Brother house and it's hard to tell which one of the two powerhouses you should be rooting for. However, they might not be the ones with the most influence in the house. Frankie Grande has practically made an Olympic sport out of being in the right place at the right time, being the guy that people lay their secrets in front of, being everybody's best friend and nobody's true ally. Zach Rance praised Frankie for having a strong social game and he was completely accurate. Frankie is the smartest kind of chameleon: the kind that doesn't let anyone see changing their colors.

At this point in the game, Frankie has somehow managed to keep coming out smelling like roses despite the sheer number of people he has directly, or more often indirectly, thrown under the bus. Some people, like Cody, have said that they don't trust Frankie at all, but those people aren't usually the ones he is actively conspiring against. The fact that Frankie can betray people and have them never see it coming and, usually, never suspect him is absolute genius on his part. He's got the charm and the brains required to have put himself in a position to exert at least some influence over all of the visible bigwigs in the house while still remaining relatable to the lesser folks who give them power.

However, considering the fact that Frankie is making people more and more suspicious, and the fact that it could get out at any time how hard he's been trying to ruin Zankie by getting Zach sent home, there's always a chance that all of his double-crossing is going to blow up in his face soon enough. Here's a look at some of the people that Frankie has conspired against so far.

Frankie's earliest display of his true colors was when he made HoH and nominated Victoria for elimination. Prior to that, Victoria and Frankie had become fast friends, but that dissolved in an instant after the nomination ceremony. Frankie tried to smooth things over with her by pinning the whole thing on Caleb, but Victoria wasn't having it. If there's anyone who knows what kind of player Frankie is, it's Victoria and she's already said that she'll never trust him in this game again.

Frankie and Joey weren't exactly close but, like with Victoria, he bonded with her quickly over their brightly colored hair. However, it didn't take long for Frankie's allegiance to transfer to the newly formed Bomb Squad and they conspired to kick Joey out. She's gone now, but it's noteworthy that she left never knowing about Frankie's role in her eviction, small though it was.

Frankie has made it far too obvious to the audience that his alliance with Devin only remains intact because Devin is a powerful player. When Devin isn't around, Frankie is basically one of the presidents of the I Hate Devin fan club. Frankie has played Devin like a piano, so well that Devin still identifies Frankie as one of the people in the house that he can trust, never knowing that Frankie encouraged Zach to blow up on him at the veto ceremony.

This one just breaks my heart. The Internet fell in love with the Zach and Frankie aka "Zankie" showmance, but when the tides began to turn against Zach then Frankie wasted no time in turning against Zach as well. He assured Zach that he was on his side even while he was running around counting votes for Zach's eviction. Zach still trusts him completely and confessed to Frankie that he was afraid Frankie would screw him over, which, of course, Frankie would never do. I hope you hear the sarcasm.

The only thing that Frankie appears to be missing when someone comes to him to talk bad about Caleb is a bowl of popcorn. Although Frankie hasn't specifically plotted against Caleb, what with Caleb being too important and influential to move against just yet, the fact of the matter is that Frankie's loyalty here is a hollow one. Caleb is another one who hasn't found reason to doubt Frankie yet, but then he it's only a matter of time...

Frankie was perfectly happy working with the Bomb Squad alliance which had a majority of the numbers in the game on their side, but that was before he was chosen to be on Team America with Derrick and Donny. Now Frankie claims his ultimate allegiance is to Team America over the Bomb Squad, which means he will throw the whole Squad under the bus if he needs to in the future. Before anybody realizes it, Frankie Grande is going to have everyone in the house on a puppet string to watch them dance. They'd better wise up before it's too late.