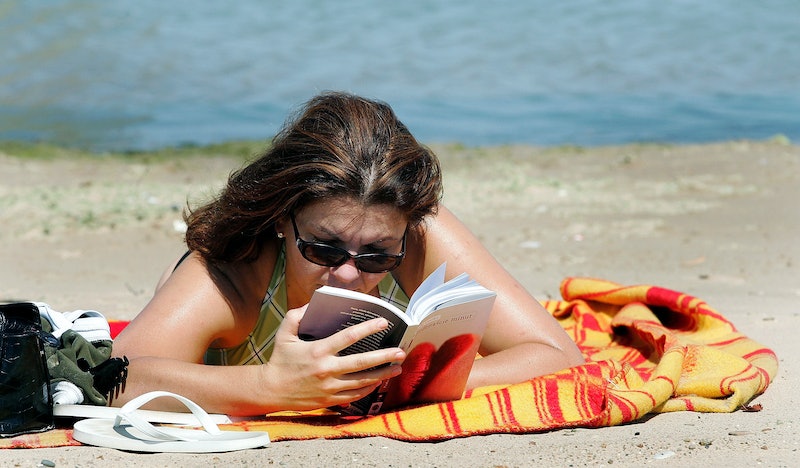 You've been cooped inside long enough, hunched over your laptop and agonizing over the best way to achieve more than 80 Twitter followers. It's 5 o'clock somewhere, baby, and you're headed to the beach. You've got your cool black bikini, your straw bag stuffed with sunscreen, and a floppy hat that's bigger than Pluto. You plan to spend 30 percent of your time on the beach napping, 20 percent splashing about in the questionably clean water, and 10 percent wondering if you should spring for a margarita from the evil-looking dude who's selling them out of a cooler. As far as the other 40 percent goes, you'll be lost in a book. Obviously.

While there's no greater pleasure in life than a truly frothy beach read — you know, one of those books with girl in a maxi dress on the cover and a title like Kiss Me Till I See Stars or Daisy Chains & Eternal Sisterhood — sometimes you're in the mood for something with a little more meat on its pages. You don't want anything that requires underlining, checking the footnotes, or breaking out your Dictionary.com app. You just want something solid enough to keep your mind sharp and your towel from blowing away if you decide to spring for that margarita, after all.

1. The Vacationers by Emma Straub

This book is already the ultimate beach read for 2014, and that's because it's hitting all the right points: it's a thoughtful, substantial story about the particular ways that a family on vacation will break down, but it's also set in Mallorca, drenched in sunlight, and — as the author herself writes to her readers — "I hope you take my Vacationers on your vacation this summer, and that you find it as summery and delicious as some fresh guacamole, or, even more apropos, a very large glass of Spanish wine."

2. I Said Yes to Everything by Lee Grant

What's better than devouring a scandalous Hollywood autobiography on the beach? Answer: devouring a scandalous Hollywood autobiography on the beach while George Clooney makes you a drink. You may knew Lee Grant from Valley of the Dolls or Shampoo, but you may not realize that the actress was blacklisted from Hollywood for 12 years and had to claw her way back to a sustainable career. It's sad and poignant and full of enough behind-the-scenes details to distract you from the irritating way George won't stop fiddling with the martini shaker.

3. The Girls from Corona del Mar by Rufi Thorpe

Anything set in New Orleans is worthy of a beach read in my book, but setting it in civil rights-era New Orleans — and inserting the death of a father and a serious abandonment by a mother — elevates this novel far past Saucy Times on Bourbon Street or whatever else you were planning to read today.

5. Nine Years Under by Sheri Booker

6. The Smartest Kids in the World by Amanda Ripley

Full disclosure: this book may not make you feel particularly smart as you turn on your towel like a chicken on a spit, since it's a work of nonfiction about kids so brilliant and motivated that they don't sleep, but it'll certainly inform you, and isn't that what getting smart is all about? Pass me a drink, George.

7. The Hundred-Year House by Rebecca Makkai

Any book that starts with a ghost story and moves on to feature weirdos, artists, and terrifying secrets in an old mansion should probably be read in the sunshine.

Some statistics make sense — you know, like "writers are more likely to be better all-around people" — and some are crazy, like the fact that people who prefer Miss Piggy to Kermit the Frog are more than twice as likely than average to have tattoos. Huh? Correlated explores the world's weirdest correlations, and will have you wondering if all the people on the beach wearing red one-pieces are more than twice as likely to star in "Baywatch" remakes.

If you haven't read this classic novel about the '70s murder of schoolteacher Roseann Quinn, it's now 66 percent off on Simon & Schuster's website and "available for immediate download." It will also make it impossible for you to talk to any male strangers on the beach ever again.

Sick to death of fairy tales, but still have a hankering for the occasional royal drama? None of these historical figures were wilting lilies — think murder, murder, murder, and lots of intrigue — but they all knew how to wear a crown.

Rowell rose to fame for young adult novels like Fangirl and Eleanor & Park, but her second adult novel tackles a very grown-up subject: crumbling marriage. Things are bad between this married couple, but just when things get worse, the plot device enters — and, well, it's kind of like time travel. If you were reading this at home with a bracing cup of black tea, you might be skeptical, but with the waves crashing and the seagulls calling and all, isn't your suspension of disbelief feeling stronger than ever?