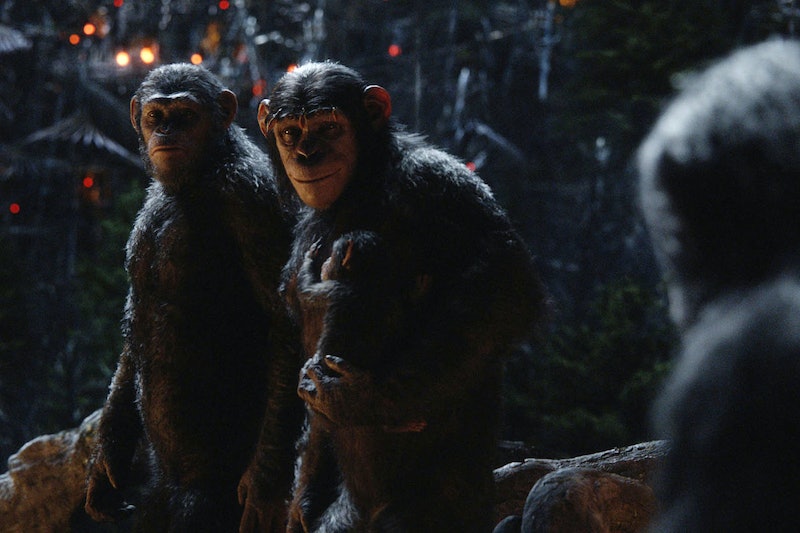 It may come as a shock to your system but perma-best friend and forever co-star (of our movie-loving hearts) Judy Greer, is playing an ape in Dawn of the Planet of the Apes . It's true! The film's main monkey, Caesar, has a wife named Cornelia and this go-around the part is being played by none other than Kitty Sanchez herself.

Not that you would know that from just watching the film, though. At a screening of the film on Tuesday night, I was surprised when the end credits rolled around and there she was: a name I certainly did expect to see in a dystopian future sci-fi/fantasy epic wherein the world has been overtaken by self-aware apes. Where was the best friend played by Katherine Heigl? The high fashion wardrobe? The freaking and shrieking? (I say it all with love, Greer. Promise.)

For much of the film, Cornelia is unfortunately nothing more than a side plot. Her pregnancy and subsequent illness used as a way to connect and foster real hope of a bond between the humans and the apes. In fact she barely has any lines at all (not that many of the apes do, but still). She's also, essentially, the queen of the apes as she is married to the original intelligent ape, Caesar — so I suppose there's a bit of a hierarchical upgrade there compared to her typical best friend fare. But it's her! And actually her accepting the role shouldn't come as that much of a surprise to anyone.

...Because Judy Greer and her husband are actually huge Planet of the Apes fans. So much so, in fact, that Greer and her husband had a semi Apes-themed wedding. "We had a chimp husband-and-wife cake topper at our wedding," the actress explained. "At the cocktail hour, we played Planet of the Apes and Rise of the Planet of the Apes on two separate televisions in the bar area. And on the wedding gift I bought him, a vintage Rolex, I had it engraved, 'Ape shall not kill ape.' I was then told that, technically, it's 'Ape shall never kill ape,' but there wasn't enough space for engraving purposes."

Apparently it was her husband who convinced her — alongside her brilliant 13 Going on 30 costar and lead in the Apes film, Andy Serkis — to go out for the role. I'm not monkeying around (okay okay sorry I just had to do it once):

More than anything, I just hope this role expands how people in Hollywood think of Judy Greer and her talents because damn, homegirl can really do anything, can't she?