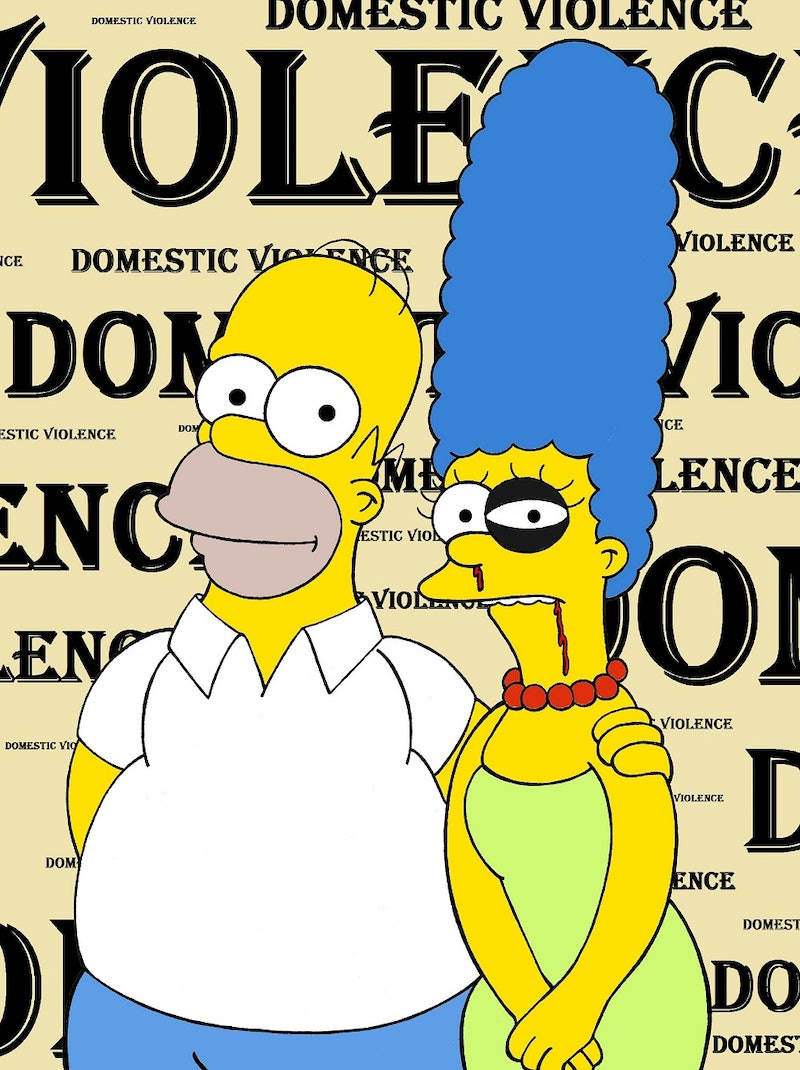 There's something undeniably powerful about seeing your favorite heroines in physical and emotional pain. This is why Italian artist AleXsandro Palombo released "No Violence Against Women," a series of illustrations featuring some of the world's most iconic animated characters, like Marge Simpson and Disney's Cinderella, as victims of domestic violence. Though images of these beloved female characters with black eyes and bloody noses conveys a strong enough message alone, Palombo takes the project a step further by including their abusers in the photos — the results of which are both loud and haunting.

For the series, Palombo displayed the animated couples — including Marge and Homer Simpson, Lois and Peter Griffin, Wilma and Fred Flintstone, as well as Olive Oil and Popeye — in a portrait-like settings. However, while the women are shown bruised and bleeding, their spouses/male counterparts appear to be happy and calm. The project also features a few more graphic images, including ones of Homer hitting Marge, and Snow White battered on the floor at Prince Charming’s feet. One family-style portrait features all of the couples together — the men relaxed, and the women clearly in physical and emotional pain. The text "What kind of man are you?" reads at the top.

Mail Online reports that the artist created and released the series in time for International Women's Day earlier this year. Palombo tells Mail Online that his intention behind the “No Violence Against Women” project was to do more than simply raise awareness: “I wanted to give visibility to a problem that affects a great amount of women all over the world."

According to the Coalition Against Domestic Violence (NCADV), one in every four women will experience domestic violence at some point during her life, and an estimated 1.3 million women are affected every year. Women are also more likely to be victimized by someone they know, and a majority of cases are never reported to the police. The National Domestic Violence Hotline also reports that 24 people per minute are victims of physical abuse in the United States (12 million women and men) every year.

This isn’t Palombo’s first foray into politically loud art. Earlier this year, the artist released “Do You Still Like Us?” — a series of illustrations displaying disabled Disney heroines. Similar to his “No Violence Against Women” project, he featured beloved animated heroines as disabled citizens, including Belle in a wheelchair, Pocahontas happily relying on crutches for support, and Jasmine missing both of her arms.

Palombo is not the only artist to raise awareness via updated illustrations of some of our favorite animated characters. Just this week, Middle Eastern artist Saint Hoax released “Happy Never After,” a series of images displaying Disney Princesses as victims of domestic violence. However, unlike Palombo’s portraits, which include the spouses of these women, Aurora, Cinderella, Jasmine, and Ariel stand alone, bruised, and bleeding, with unforgettably calm expressions on their faces. Both series convey messages of awareness about domestic violence in their own unique, yet powerful ways.

Take a look at photos from the "No Violence Against Women" series below:

If you or someone you know is or has been a victim of domestic violence, call the National Domestic Violence Hotline at 1-800-799-SAFE (7233).

To view more of AleXsandro Palombo's work, visit his site at alexsandropalombo.com, or his blog at humorchic.blogspot.com.