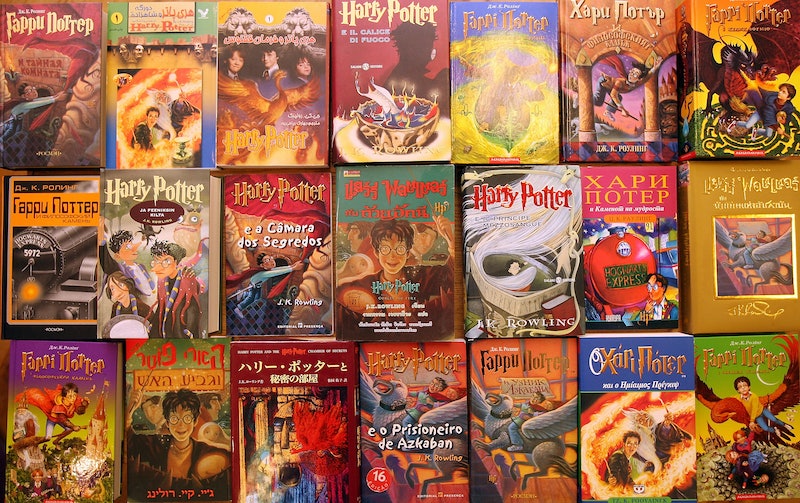 The World Cup final airs on Sunday, but there's another exciting TV event happening this weekend for the more literary-minded — ABC Family's Harry Potter Weekend movie marathon. With J. K. Rowling posting new stories and updates from the Quidditch World Cup on Pottermore to coincide with the real World Cup, it's the perfect time to indulge in a Harry Potter marathon. In all the Potter-movie excitement, it's important to go back to our HP roots and compare the first real game-changing Harry Potter book, Harry Potter and the Goblet of Fire, to its movie counterpart.

As a serious Potterhead, I "attended" the NYC premiere of Harry Potter and the Goblet of Fire back in 2005. I didn't get to see the movie, but I had plans of meeting Daniel Radcliffe and crew afterwards. What I got was Rupert Grint waving from a limo, and a glimpse of Robert Pattinson and Katie Leung walking away from the theater. Don't get too jealous, everybody.

But I just KNEW the movie was going to be the best yet. Harry Potter and the Sorcerer's Stone and Chamber of Secrets director Chris Columbus had been too safe and juvenile, while Prisoner of Azkaban director Alfonso Cuarón went a bit too off book (remember the talking shrunken head on the Knight Bus?).

Goblet of Fire was going to be better than the previous three movies. The posters were sweet, Ralph Fiennes was making his debut as Voldemort, and they had a new director at the helm — Mike Newell — a true Brit who had directed Four Weddings and a Funeral. It was going to be the BEST, right? RIGHT?!

Well, as any true devotee of a book series knows, it's hard to take the changes that inevitably happen from book to movie. So even though I thought Goblet of Fire was better than the previous movies, the discrepancies from the book still irk me to this day. Here are some of the worst offenses.

The Goblet of Fire

A very noticeable difference between the book and movie was the way Dumbledore reacted when Harry's name came out of the Goblet of Fire. We had seen Michael Gambon portray Dumbledore for the first time in Prisoner of Azkaban, but he plays Dumbledore too aggressively in the “DID YOU PUT YOUR NAME IN THE GOBLET OF FIRE?!?” scene.

In the book, Dumbledore is extremely concerned that Harry’s name is in the Goblet, but he stays calm so that the readers don't know what's going on in his mind. Gambon, however, yells at Harry and comes off almost accusatory. Of course, it can be interpreted that he went off the handle because he was concerned, but c’mon. Dumby knows how to keep his cool better than that.

Okay. I get that this is like a bajillion-dollar movie and they are going to milk the action scenes for all they are worth. But the dragon scene in the movie is RIDIC. Harry basically flies to freakin' Albania and back and destroys part of Hogwarts in the process. Plus, the dragon plummets from the sky and looks like it gets seriously injured or dies!

In the book, fighting a dragon was scary enough, so he stayed within the arena and used his flying skills and a well-played Accio spell to get the egg from the dragon. Because even though the Triwizard Tournament is way too intense for anyone (let alone teenagers) to be involved in, it is still a school-sanctioned event and all. And J. K. Rowling does not support the abuse of magical creatures.

Another sad side effect of changing the dragons' portrayal is that it meant no Charlie Weasley (who, admit it, sounds like he's kind of hot in the books). Alas, Charlie is never seen in any of the movies — minus one fleeting glimpse of a family postcard from Egypt.

Where was Dobby? Where was Winky?! Poor Winky didn't even exist in the movies. No elves also meant no Society for the Promotion of Elfish Welfare (S.P.E.W.), Hermione's political organization to get house-elves more rights. As it were, no one cared too much about S.P.E.W. in the book either, but it made Hermione more lovable (and at times, intolerable) for caring so much about the social injustices against elves. If you care about S.P.E.W., you can always check out a Harry and the Potters concert, where they are sure to play their song covering the topic.

And we didn't get to see the kitchens of Hogwarts since elves were omitted, which was a bummer since they sounded sweet.

Another movie instance of showing no love to the house-elves. Dobby is actually the one who helps Harry survive the second task of the Triwizard Tournament. Harry stays up all night, pounding the books, trying to figure out how he can survive swimming underwater for more than a few seconds. Dobby appears in the morning at the last minute with gillyweed, which is exactly what Harry needs, as it gives him gills and flippers — allowing him to swim underwater for an extended amount of time. In the movie, the gilleyweed is still present, but Neville gives it to him.

Both Barty Crouch Sr. and Barty Crouch Jr. are in the movie and the main plot of Barty Crouch Jr. being the mastermind behind getting Harry to the graveyard to help bring back Voldemort is intact. But there are tons of little changes to the facts around how Crouch Jr. got there. Brendan Gleeson, as Moody, and David Tennant, as Crouch Jr., do a funky tongue thing to tip us off about Crouch Jr. being in disguise. That wasn't included in the book so it was more of a blindside when it was revealed that Moody wasn't really Moody the whole time.

There are so many variations between the book and movie, it's hard to capture them all. But some other major points/characters that the movie skipped over.

To be fair to the makers of the movie, it's gotta be pretty tough to condense a 734-page book to a 150-minute movie. But feel free to check out the comprehensive list of book-to-movie differences compiled by the Harry Potter wikia. Or why not spot the differences yourself this weekend by watching ABC Family's Harry Potter marathon. Maybe you can even make a drinking game of it, since you're all grown up now.

Images: Have You Ever Cried Wolf, The Doctors Lost Companion, Bloody Difficult/Tumblr