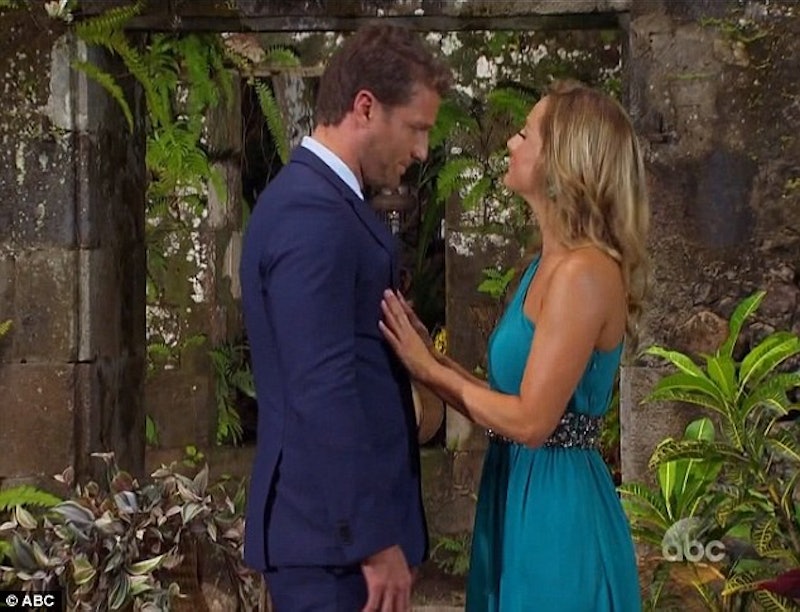 Even if Andi Dorfman does hand out all of her Fantasy Suite date cards on Monday to Nick Viall, Josh Murray, or Chris Soules, that doesn't mean the men will accept them. In the history of The Bachelor and Bachelorette (18 and nine seasons respectively), five contestants have skipped out on the magical overnight date. Chris Harrison's hand-penned note asking if the couple chooses to forego their individual rooms and stay together can be tempting, and an overwhelming amount of contestants accept, but not all are that easily swayed by the promise of sex. True, only about six percent of the suitors have that kind of self-control, but it has happened.

During Emily Maynard's season, she was hesitant to go on any overnights because her daughter would be watching (that sure didn't stop Juan Pablo) and Emily even became the only contestant to decline handing out a card to a contestant. She likely would have done the same to Jef Holm, but he beat her to the punch and declined her offer before she could choose to extend it. "I think it would be awesome, but I completely understand if your daughter is going to be watching this," Jef said when the little envelope showed up. "My family is going to be watching this. There’s a time and place. I plan on spending the rest of my life in our own fantasy suite." They ended up breaking off their engagement, but at least he got to show America what a gentleman he was, right?

And way back in Season 6, another contestant turned down then Bachelor Byron Velvick. That season things were actually structured differently, and the women could choose whether or not to present the card to The Bachelor, instead of the other way around. While three of Byron's contestants did so readily, one woman, Cheresse Pentella, turned The Bachelor down. She said the reason behind this move was if it were the real world that would only be like their third or fourth date and she wouldn't sleep with him so soon. But this isn't the real world, it's The Bachelor and the consequence for her actions was that Byron ended up sending her home that week.

There's also three men who ended up saying goodbye to the overnight dates because they chose to leave during Fantasy suite week. On Ali Fedotowsky's season, Frank Neuschaefer showed up for their date and left her heartbroken when he said he was leaving the show.

Ali revealed later that she only had sex on one of her overnight dates, but had Frank stayed that might have changed. "The third guy left me. So would I have gotten physical with more than one guy if he would have stuck around? Probably."

Then in Ashley Hebert's season, contestant Constantine Tzortzis excused himself from the show during the dinner portion of their one on one date. "I know what the fantasy suite means and implies," he said to a stunned Ashley. "I knew if I got to this point and I wasn't in love with you, I wouldn't accept the fantasy suite." And he didn't, instead choosing to walk off the show and out of Ashley's life for good.

And in one of perhaps the most well-known Bachelorette walk-outs, Brooks left Desiree during Fantasy Suite week when he showed up for her date ready to tell her he just wasn't ready for marriage. Unfortunately, Desiree had just gotten done telling the camera crew that she loved him and would absolutely accept if he proposed, so it was very poor timing. Needless to say they didn't end up spending the night together.

Will any of Andi's men walk out on her Fantasy Suite request? Well, Josh and Chris seem pretty smitten, but the promo for Monday's episode showed Nick acting a little apprehensive about their relationship. "I just kind of, like, glorified the relationship," Nick tells her. "I have lied to myself."

Well then. Assuming Andi hands out all three Fantasy Suite keys, we'll have to wait and see if she gets three positive responses in return. You never know what can happen in Bachelorette land.