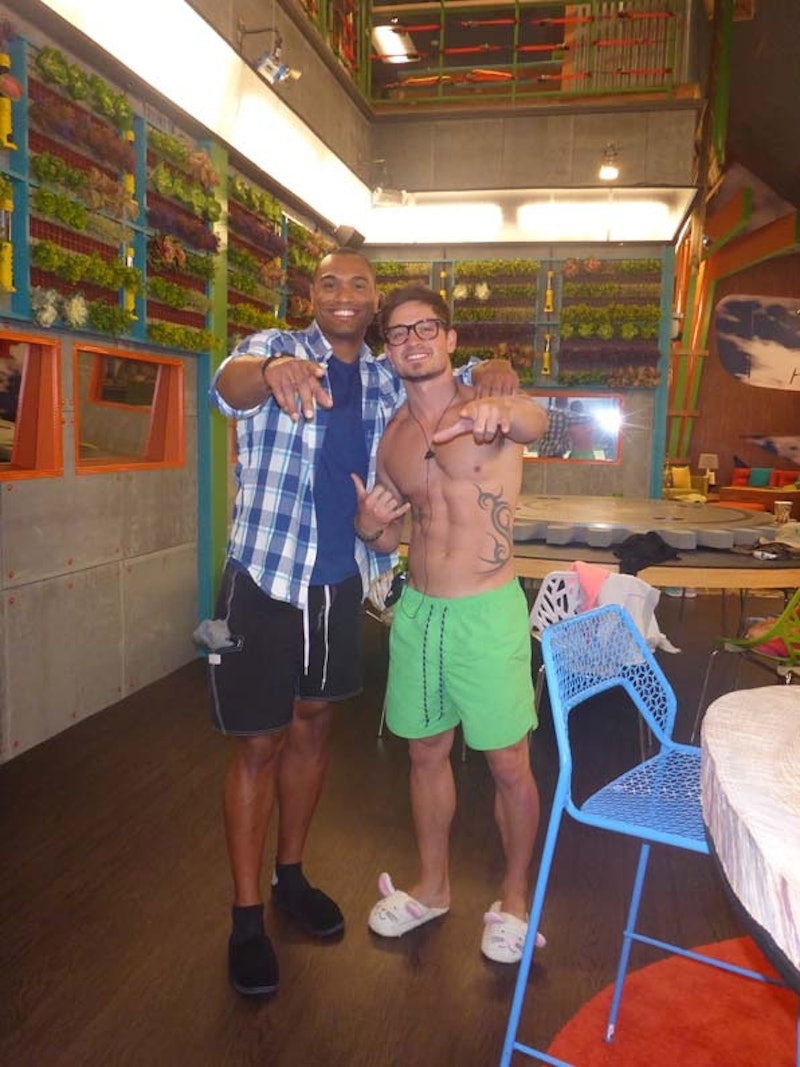 Well Big Brother fans, I have good news and bad news. Chivalry is not dead in the Big Brother house, and Caleb Reynolds is still is in love with Amber Borzotra. The combination of these two facts can only bring for interesting television for us. As a refresher, Caleb became completely infatuated with Amber during the first couple of weeks of the game, a feeling that wasn’t completely reciprocated, but Caleb believed otherwise. Caleb has even gone so far to say that he will do anything to keep him and Amber safe in the game.

And that is exactly what he is doing this week. On Thursday’s live episode, we saw Nicole and Derrick win the two coveted Heads of Household spots, which ignited a possibility that Devin Shepherd, the outgoing HOH, would finally get evicted from the house. Hooray! Devin is a loose cannon in the Big Brother house, after all. Just last week we saw him break down and admit to the entire house that he was going to play a more honest game for his daughter, but then he nominated Zach Rance, a member of his own alliance, for eviction. After Devin completely flipped, it was obvious his days were numbered in the house. But according to BB Feedster, Nicole and Derrick were worried that if Devin was nominated and played POV, he could win and pull himself off the block. That’s where the idea of backdooring Devin entered the game.

Derrick, proving once again that he could win this entire game, came up with an awesome plan to put two huge game players up on the block next to each other, and so far, it’s unfolding seamlessly. When trying to decide how to get rid of Devin, without him playing in the veto competition, Derrick realized that Nicole should nominate Amber, and he would nominate Caleb so he could throw the Battle of the Block competition, save Amber from eviction and help backdoor Devin. But obviously Caleb wasn’t going to be super into that plan, right? Wrong. Derrick somehow convinced Caleb to volunteer himself for the block in order to save "his girl" from potentially going home. I think the phrase “knight in shining armor” was used. Here’s what the block looked like after nominations: Derrick put up Caleb and Jocasta, and Nicole put up Amber and Donny.

Because Caleb is playing this game for Amber (and himself...I think), he lost the Battle of the Block, which took Amber out of the running for eviction. And once they played POV (of which, Donny won!) it was all falling into place that Devin would be put up in replace of Jocasta so he could walk out the door on Thursday’s show.

So what does the future hold for Amber and Caleb now that Caleb has truly shown his devotion to her? I’m thinking Amber still won’t pay attention to Caleb and Caleb will still pine for Amber until he is forced to walk out the door, but time will tell.

More like this
The 'Big Brother 24' Racism & Bullying Controversy, Explained
By Jake Viswanath
What’s New On Netflix: 'Never Have I Ever' & 'Indian Matchmaking' Return
By Arya Roshanian
Ashton Kutcher Opens Up About His Battle With Rare Autoimmune Disorder
By Radhika Menon
All The Clues Aven Gets Engaged To Rachel On 'The Bachelorette'
By Kadin Burnett
Get Even More From Bustle — Sign Up For The Newsletter