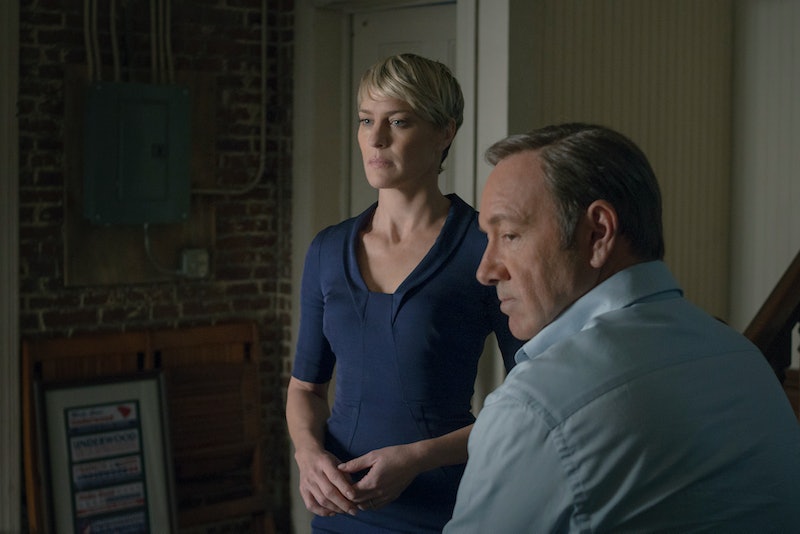 The titular house is about to collapse. As Netflix's House of Cards enters Season 3 (potentially its last), Kevin Spacey's machiavellian schemer has finally achieved his ultimate goal: he's officially the President of the United States, without a single vote ever having been cast in his favor. But now that former Representative Underwood is the most powerful man in the world, he's got nowhere to go but down. And what could be more satisfying than seeing this man, who's manipulated, cheated, and even killed his way to the top, finally get what's coming to him? Figuring out the agent of his downfall, of course. Is it an ambitious rival politician? A nosy journalist? ...Or could it be his own beloved wife, Claire Underwood?

Potential spoilers to follow. Fans of House of Cards' source material, the original British series The Final Cut, know that if Netflix's series follows the original, Frank won't make it out of the third season alive. The Final Cut, which follows House Of Cards and To Play The King, depicts the fall of Prime Minister Urquhart. The series' swan song revolves around Frank's public efforts to resolve a dispute in Cyprus while simultaneously scheming under the table to bring oil deposits in the nation under Britain's control. It's not hard to imagine that the American version will find a way to update this plot to one more relevant to our country's current political climate — but it would be surprising if it didn't tackle a similar story, since it results in a climactic twist that brings Urquhart's reign to a thrilling conclusion. And while we'll hate to see House Of Cards end, we hope it goes out with a similar bang. Literally.

Claire has always been supportive of her husband, helping him claw his way to the top, and reaping the benefits of his increased power. But if his position at the top started to crumble, we'd have to wonder: Would she stand by her husband and go down with him? She could do whatever it took to maintain her own position, but that all depends on what Claire really loves more: her husband or her power.

In The Final Cut, when it becomes clear that Frank's downfall is imminent, his wife Elizabeth (as she's named in the British version) takes matters into her own hands. In the final scene, Frank is assassinated by a sniper — a sniper that was hired by Elizabeth herself. She'd rather her husband be killed than see him disgraced. That's pretty cold. But we already know that Claire Underwood has ice flowing through her veins, so it's easy to imagine her arriving at a similar solution.

As cold-blooded as it would be for Claire arrange the death of her own husband, it's actually not as cut-and-dry as a choice between love and power. In a perverse way, Elizabeth arrived at the decision as a way to protect her husband — and we have every reason to believe Claire would do the same thing. Being assassinated is a much more dignified way to exit the office than impeachment. Frank's death would simultaneously protect Claire and preserve his legacy. It's a heinous act, but one Mrs. Underwood wouldn't hesitate to execute if it came down to it.

Then again, maybe Season 3 won't end in Frank's death after all. There's been no official statement from Netflix about whether Season 3 will be the final season, or whether they're planning more. And it's possible that the subscriber service will want to hold on to their most popular and Emmy-worthy series. After all, a deck of cards has four suits of thirteen cards each. At thirteen episodes per season, the symbolism behind four seasons might be too perfect to resist. Perhaps Season 3 will focus purely on Frank's reign before Season 4 depicts his fall.

There's also two jokers in every deck, so maybe House Of Cards could even culminate in a pair of feature films. Okay, maybe that's pushing the metaphor too far...