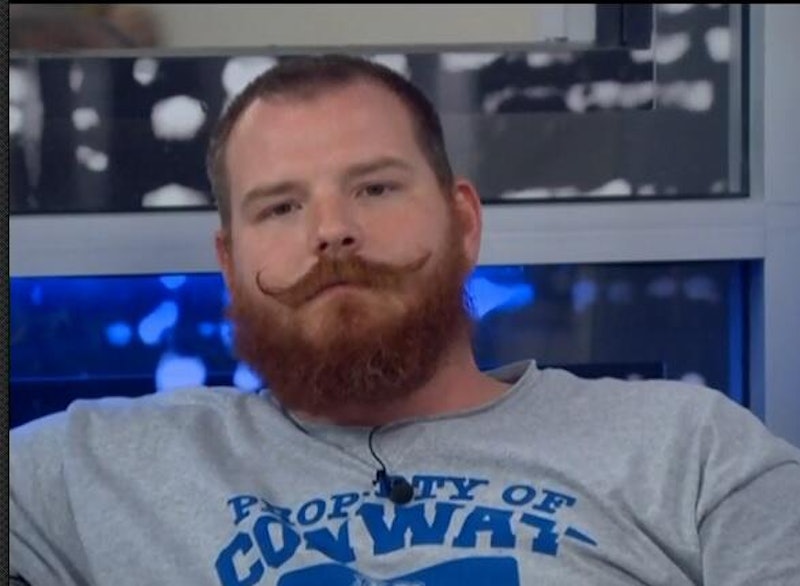 You might not be able to watch Big Brother thanks to the CBS-Time Warner blackout, but you don't need to watch the reality series to know that its cast of terrible people are continuing to be terrible. But the series casual racism — courtesy of Aaryn Gries and GinaMarie Zimmerman, both of whom have lost their jobs after being filmed using derogatory phrases — pales in comparison to what contestant Spencer Clawson reportedly uttered in the Big Brother house on Monday.

"Oh God," says Andy."I love it. Beating off to child p*rn is my favorite thing there is." Spencer is talking directly into his microphone...or is that McCrae's?He continues, "I love it when they're around 3 or 4 years old. My favorite ones are when you can tell they're in a basement."Andy is uncomfortable, Amanda smiles. Andy changes the subject by asking what they are having for dinner.

Of course, there is a good chance Clawson is joking — the very fact that those watching the live stream have noted the contestant spoke the words directly into his microphone seems to indicate he was saying this for effect. But, at the same time, we are talking about Clawson — a man who's also been unabashed about his sexism and prejudice in the house — and a topic that shouldn't be the topic of any joke, regardless of the comedic skills of one telling it.

Big Brother 15's houseguests have made watching the reality series the most unpleasant experience in years, making you wonder how much effort CBS put into screening this year's cast, pressures of the group mentality be damned. Still, the network can make up for it the same way they made up for Gries' rampant racism: By showing Clawson's words on camera.

(CBS already released a statement condemning cast members' statements in the house shortly after Gries came under fire for her words, telling media, "At times, the houseguests reveal prejudices and other beliefs that we do not condone. We certainly find the statements made by several of the houseguests on the live Internet feed to be offensive. Any views or opinions expressed in personal commentary by a houseguest appearing on Big Brother, either on any live feed from the House or during the broadcast, are those of the individual(s) speaking and do not represent the views or opinions of CBS or the producers of the program.")

So far, with the exception of a "shut up" lobbed at Amanda Zuckerman on last week's episode, Big Brother has failed to produce any footage of Clawson's sexism or prejudice. (Much like it has yet to show any footage of Zuckerman's own racism.) But he's as much a charming Southerner as Gries is a naive belle. So why reserve the terrible human being edit for Gries alone?

Let's show the cast for who they are — horrible, horrible people who are ruining our favorite summer guilty pleasure. And then, CBS, can we get Zingbot in here to build us a robot remote that can fast-forward our lives to summer 2014, when a Big Brother that actually plays on our TV screens will be free of awful, awful people?