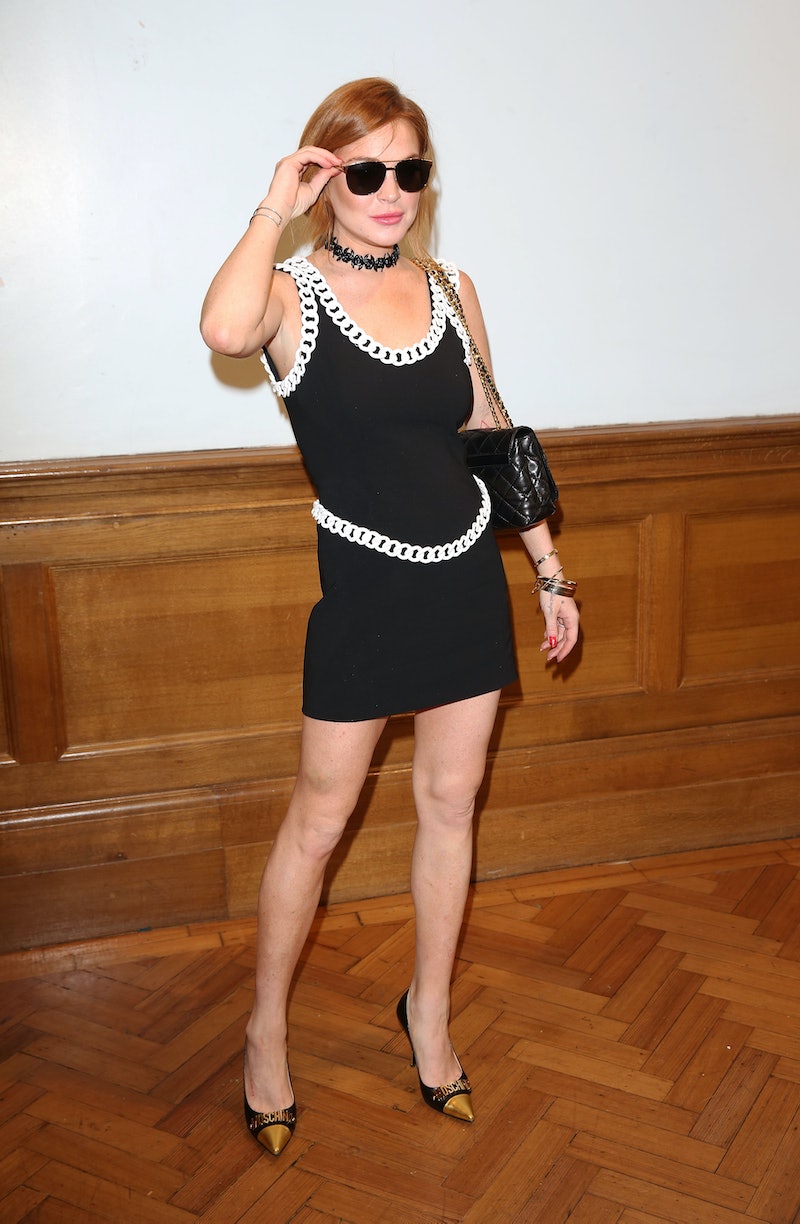 LiLo is a Londoner, baby! America is thisclose to weeping as we lose sometimes-actress Lindsay Lohan, who kept the gossip media mill turning for years, to London, since the star has headed across the pond to star in a West End production of Speed the Plow. It appears to be a temporary move, although rumors suggest that the long-troubled starlet might settle there on a more permanent basis. I am not sure if that warrants an apology from our government officials or not, but...

Lohan, one of my fave freckled celebs, is aiming to exhume her seemingly dead acting career — which was withering away on life support via Liz Taylor Lifetime movies, a beleaguered Bret Easton Ellis indie (The Canyons), and an Oprah Winfrey–sanctioned reality show — with her theater turn. Whether or not it works remains to be seen.

But La Lohan needs to mind her Ps and Qs over in jolly ol' England. It wouldn’t hurt for her to pay close attention to the British girls and adopt some of their style signatures so that she'll look good while fitting in and being on her best behavior. She is currently in rehearsals for the show, which opens in October, and her reps dismissed reports of familiar Lohan professional antics (like lateness).

These are five things Lohan should do, in terms of her personal style, in order to make a legit go of it in London.

Arterton popped on our radar as Strawberry Fields in Quantum of Solace from the Daniel Craig era of 007 movies. The fair-skinned actress does change her hair color, but is mostly identified as a ginger. She is freckly, like LiLo, and she usually looks impeccable at events and while out and about. Instead of emulating Cara Delevingne, who is too young and partying à la Lohan circa 2007, Lohan should channel Arterton. Observe and implement, Linds.

2. Ditch The Tanner, Embrace The Pale

"Basketball orange" is not a natural skin tone. Lohan has been known to OD on bronzer and self-tanners, but her pale, porcelain skin, with its generous smattering of speckles, is much more interesting when authentic. Lots of styling English girls are more than okay with going tan-free. Lohan, you should, too! The look above is the way to go, Li to the Lo.

3. Invest In A Burberry Trench

Burberry is a longstanding and luxe British brand and its trench coats are classic and look good on everyone. Kate Middleton's belted, trumpet-hemmed version, paired with opaque black tights and heels, has become one of her iconic looks. Wouldn't you love to see LiLo don a similar version, showing off her legs? Right?

On the complete flip side of Burberry, Doc Martens are often associated with the English punk scene, but the sturdy and stylish combat boots find their way to the feet of fashionable females. Lohan could totally embrace her currently nonexistent punk side with a pair of black, eight-hole docs. Or she could really rebel with a pair of cherry-colored Docs, which would clash amazingly with her hair. Regardless of color, Docs are edgier and way cooler than those dudelike oxfords that Taylor Swift wears.

Topshop, thankfully, arrived stateside a few years ago, but it's an English export. It's more high-end than H&M but it is very realway and real girl. LiLo could dress up her beloved leggings with plenty of purses from the retailer and align herself with a hip brand loved by a young demo. That would totally connect her with a fresh scene. Imagine the headlines. "Omg, look, Lohan has gone totally Topshop while in London!"