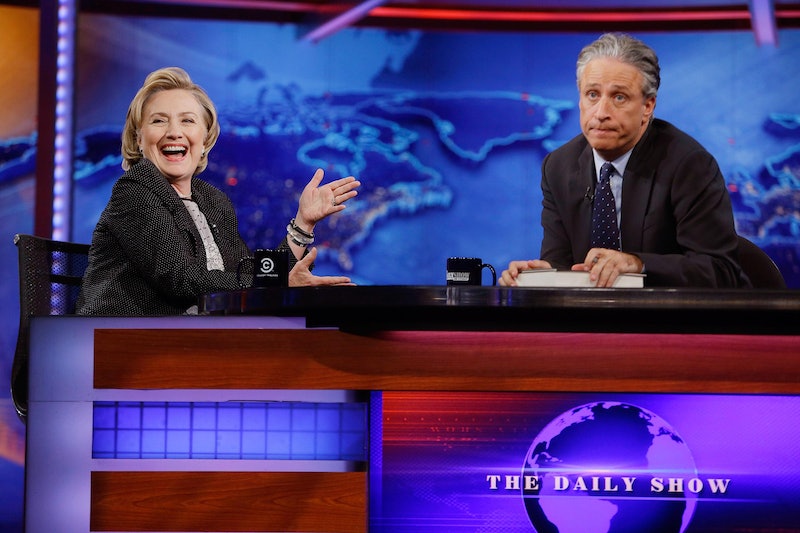 So, Hillary, how ‘bout 2016? Made any decisions yet? Care to make any announcements? The answer to that second question is still technically a “no,” but only under the strictest definition of “announcement.” In an interview on The Daily Show Tuesday, Clinton was peppered with questions about whether or not she’ll run for president, and while she didn’t officially say those magic words, she did say just about everything else in her power to imply that she will.

“You know, Jon, I was going to make an announcement, but I saw — you kind of spoiled it for me,” she said when Stewart asked her if she was running. “I’m just going to have to reconsider where I’m going to do it.”

“Where I’m going to do it.” Not “if,” but “where” — that sounds pretty definitive. Stewart went on to give Clinton a mock “career aptitude test,” asking her if she prefers to commute or work from home, and what shape office she’d like to work from. Clinton gleefully remarked that she prefers a home office without any corners.

So, either Clinton is running for president, or she’s having a splendid time winding everybody up into believing she is.

But seriously — why is she playing it this way? Prospective presidential candidates usually approach their announcements with either coyness (“I haven’t made any decisions about my future yet”) or, if they’re a lesser-known candidate, by making waves early in order to drum up free publicity. Clinton, by contrast, is happily feeding fuel to the fire while stopping short of an actual announcement, and that’s a bit unusual. So again, what’s going on? Here are a couple of theories.

Suppose, for the sake of argument, that Clinton is 99 percent sure she’ll run but isn’t ready to commit yet. Were that the case, it would very much be in her interest to suggest that she’s running but not confirm it, and that’s thanks to the “shadow primary” that takes place before any votes are cast. Before launching their campaign, a good presidential candidate has to do plenty of behind-the-scenes work to win over prospective supporters — namely donors, activists, and political operatives — or else they won’t have the infrastructure needed make an effective run. (This is one reason why Bridgegate is highly relevant to Chris Christie’s presidential ambitions). Perhaps, then, Clinton is merely signaling to her network not to throw in with any other candidates just yet.

The problem with this theory is that Hillary Clinton, by virtue of being Hillary Clinton, doesn’t have to worry about any of this. In addition to the enormous network of influence and support she’s built up over the last two decades, she literally already has a campaign-in-waiting, as well as a super PAC devoted solely to her. It seems odd that she would feel the need to send any more messages to her backers that she is, indeed, leaning toward running.

She’s Keeping Other Opponents Out Of The Race

If Clinton runs for president, a lot of otherwise-formidable candidates — Sens. Elizabeth Warren and Kirstin Gillibrand, and New York Governor Andrew Cuomo — will most likely sit the contest out, as Clinton is the prohibitive favorite by a long shot. But two other potential candidates — Biden and former Montana Governor Brian Schweitzer — haven’t been shy about hinting that they might run. While the idea that they, or anyone else, could actually give Clinton a run for her money may sound silly, that idea also sounded silly in 2008. We all saw how that turned out.

So it’s possible that Clinton is stoking the fire in order to dissuade anyone else for running. Think about it: By not announcing her candidacy but implying that she is, Clinton ensures both that other Democrats won’t attack her yet (since she’s not actually running) and that none of them formally launch their own campaign and get a leg up on her.

Although Stewart opened by asking Clinton about 2016, the ostensible reason she was on The Daily Show to begin with was as part of the book tour for Hard Choices, her account of her years as Secretary of State. The point of a book tour, of course, is to drum up publicity and sell books, and what a better way to get publicity than to come to the edge of announcing for president and then pulling away?

Admittedly, this sounds like a bit of a stretch, mainly because Clinton has no problem at all getting publicity anyway. But it is a possibility, and if she ultimately decides not to run, people may look back on this interview as nothing more than a publicity stunt.

The last couple of news cycles haven’t been very kind to Clinton. Conservatives pounced on her for downplaying the wealth she and Bill have accumulated, while Democrats pounced on her for refusing to say that she’d changed her mind on gay marriage, even though she obviously did. And that’s to say nothing of Karl Rove suggesting she had brain damage.

On the Daily Show, by comparison, Clinton came across very well. In addition to being relaxed and natural, she demonstrated, through her answers to the 2016 questions, an excellent sense of humor. She was having fun when Stewart administered the fake career aptitude test, and it showed. While there’s no way to quantify how much value voters place on a sense of humor when assessing presidential candidates, it definitely doesn’t hurt, and if Clinton is indeed gearing up for a run, now would be the perfect time for her to start ingratiating herself with voters who haven’t already made up their minds. And as for those who have? She may as well stretch their excitement out as long as possible.