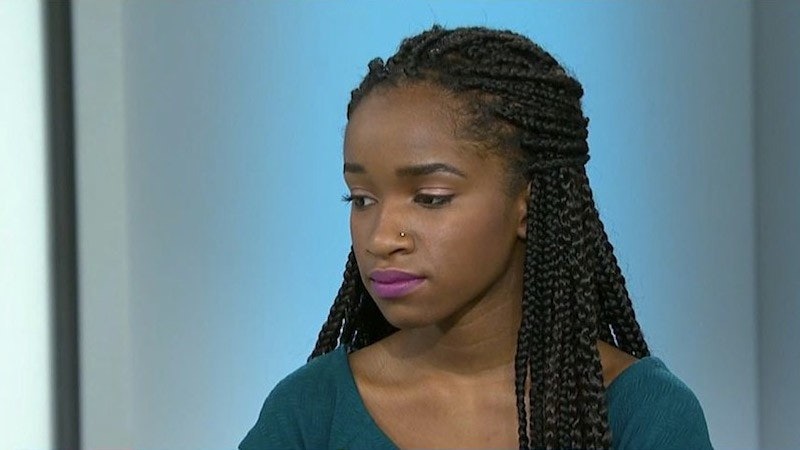 Bright lipstick is for hussies, gal. Take that off. That's what my next door neighbor, a black woman in her early 60s, told me as I walked past her on my way to school. My lips were red that morning, stained with a gorgeous hue that showed off my 14-year-old teeth. But instead of recognizing how my lipstick complimented my complexion, my dope sneakers, and my purse, my neighbor effectively slut shamed me. She made my makeup choice a reflection of my sexual morality.

I learned that day that bold lipstick made me a hussie, a fast girl, a promiscuous teen who devalued myself by daring to express myself. I quickly used the back of my hand to wipe away the color, leaving a stain on the back of my hand. For years, I wore neutral shades on my lips. Afraid of being perceived as anything less than respectable, I turned away from the gorgeous bold shades at makeup counters. I wanted to be taken seriously, and I had enough going against me as it was.

Black girls who respect themselves and their bodies keep their legs closed and their lips bare. We move through the world quietly. We are seen and not heard. It was a historical and pervasive fact that was often spewed at dinner tables, in churches, and even on the way to school. Being a black girl with big, boldly-painted lips was a cardinal sin, and I was intent upon not repeating it.

If Jada had chosen to lay in her bed for weeks and bawl, she'd be justified. Instead, she made a different choice. She decided to rise, look interviewers in the eyes, and paint her lips fuchsia. It is a tiny act of defiance in a sea of pain.

I wonder if Jada, a 16-year-old Houston native battling the aftermath of a traumatizing rape, ever received a similar spiel from her mother, aunties, and neighbors. I wonder if she was defying their twisted logic when she began appearing on national television in her now signature fuchsia shade that immediately draws attention to her mouth. I wonder if she realizes how brazen that decision is. I wonder if she knows how much black women like me admire her for it.

There are few things more important for a rape survivor than reclaiming his or her narrative. Nobody knows this better than Jada, who was allegedly drugged and raped after accepting a drink at a party. Her story quickly drew national attention when her accused rapist began circulating photos and videos of her unconscious body on social media networks. It spawned a meme: #jadapose, where folks lay on the floor half-naked in imitation of her alleged assault.

Jada could’ve opted to remain silent. Instead, she put on some lipstick, and decided to take a stand. She posted a #IStandwithJada photo that quickly went viral, and effectively took back the discussion of her rape. She appeared on national television shows, and continues to fight against a rape culture intent upon devaluing her over and over again. Every step of the way, she's refused to be anyone less than herself. Of course, it is especially revolutionary for Jada to don colorful lipstick while discussing her rape — especially as a black woman.

Rape has long been used as a tool of oppression against us, and justified through faux constructions of black women as hypersexual seductresses. In sociologist Dr. David Pilgrim's analysis of the jezebel stereotype, he notes that the connection between hypersexuality and black women originated in slavery. According to Pilgrim, the jezebel stereotype was "depicted as a black woman with an insatiable appetite for sex. She was not satisfied with black men. The slavery-era jezebel, it was claimed, desired sexual relations with white men; therefore, white men did not have to rape black women."

Though slave women were property and couldn't consent, plantation owners justified their sexual terrorism by painting black women as lascivious. In response, black women often adopted strategic ways of navigating the jezebel stereotype, like wearing conservative clothing and otherwise shrouding their sexuality. This is the historical framework that Jada must still navigate.

In wearing bold hues on her lips in multiple interviews, Jada shows us just how fierce she is. Nobody can strip her of her humanity without her permission. She appears on TV with her beauty and sense of self intact; even when she's subjected to misguided interviews on shows like The View .

No rape survivor should have to be strong. It isn’t a requirement for healing after trauma, particularly for black women who have often endured such abuse in silence in an attempt to shroud themselves from vulnerability and stereotype. Jada is not obligated to be wise, or resilient, or strong. She is allowed to be fragile, broken, afraid, hurt, and emotional. If Jada had chosen to lie in her bed for weeks and bawl, she'd be justified. Instead, she made a different choice. Jada puts on her lipstick and continues telling her story, unafraid and beautiful. She decided to rise, look interviewers in the eyes, and paint her lips fuchsia. It is a tiny act of defiance in a sea of pain.

Her decision, whether it’s conscious or not, is freeing for the millions of women like me who were told that our worth could be determined based on what we wear on our faces and bodies.

I was a graduate student before I stopped avoiding bold colors at the makeup counters. It wasn't until I enrolled in my first feminism course that I realized how my neighbor attempted to oppress me, and the historical roots her comments were birthed from.

The first time I wore red lipstick — MAC's Ruby Woo to be exact — I felt fierce and gorgeous. I also waited with bated breath to see if my grandmother or another woman in my family would comment on the shade. I breathed a sigh of relief when my mother expressed how gorgeous the hue was on me, and encouraged me to continue wearing it. Now, I proudly swath my lips in reds, pinks, and oranges. But I still haven't forgotten my neighbor's comments, or what they signified.

Feminism freed me from the constraints of "respectability." I am heartened that Jada already knows at 16 what it took me 22 years to figure out: I am beautiful and deserve respect — no matter what damn lip color I'm wearing.