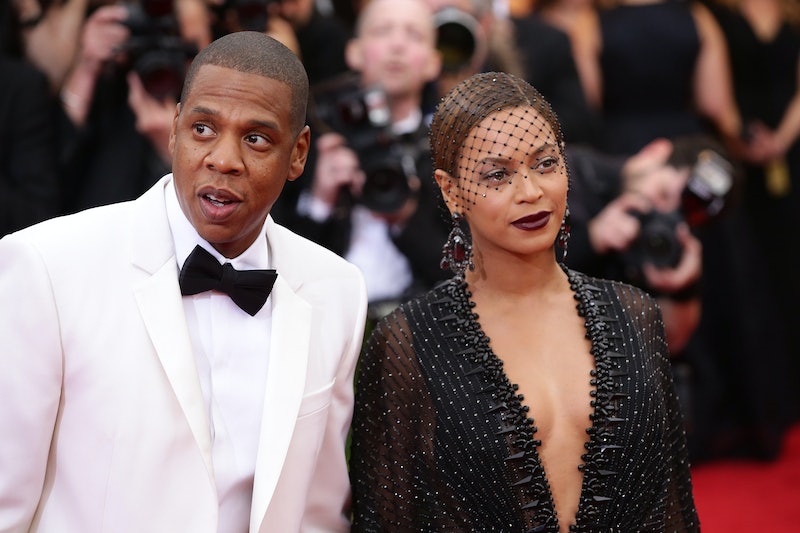 Beyonce and Jay Z are the ultimate celebrity power couple (sorry, Brangelina) which means that their relationship is analyzed relentlessly in the press. Lately this analysis has pointed to a major breakup between the two stars. "Elevatorgate" may have started with a feud between Bey's sister Solange and Jay Z, but the mysterious reason for their fight has had people speculating that it's more to do with Beyonce and Jay Z's relationship than a rift between her sister and brother-in-law. One rumor suggests that the fight started because Jay was getting a little too close to Rachel Roy and that Solange was defending her big sister. Of course, then Bey and Jay released this promo for their joint On The Run tour, and making everyone forget about that whole elevator thing and their potential marital troubles. Until now, apparently — according to a new report, Mr and Mrs. Carter will divorce after the On the Run tour wraps.

The source over at The Hollywood Gossip claims that Bey and Jay are already over and are waiting until the tour wraps up to make it official. The source claims that the couple's lack of wedding rings is a big indicator of their marital status — no wedding rings, no marriage. Reports are also saying that Bey is doing more than just removing her ring — she's also in the process of getting a small tattoo symbolizing her wedding date removed.

(Beyonce did say it herself — if you like it, put a ring on it.)

But while sources may claim that Bey and Jay are on the verge of breaking up, I'm not so sure. After all, of course the tabloids are going to suggest a split between two of the biggest names in music. I mean, a real Beyonce and Jay Z divorce would be the scandal of the year — who wouldn't want to jump on that? Though Bey and Jay have allegedly been seeing a therapist, that doesn't mean that their marriage is doomed — if anything, it might be a sign that the two of them are pro-active in working on whatever issues they do have. While I'm not naive enough to think that celebrities live in a fairytale land where they never divorce or cheat on one another, I don't get the impression that the Carters are on the cusp of a marital collapse. Would you go on tour with a husband you're two steps away from divorcing? That would be miserable.

Another piece of evidence proving these two aren't breaking up? These adorable couple photos. I mean, really: Just look at them. Are these two moments away from signing divorce papers? I think not. Check out the adorable photos below.

The "We're So In Love And Fabulous" Pic

The Black And White Pic

The Most Perfect Family Ever Gif