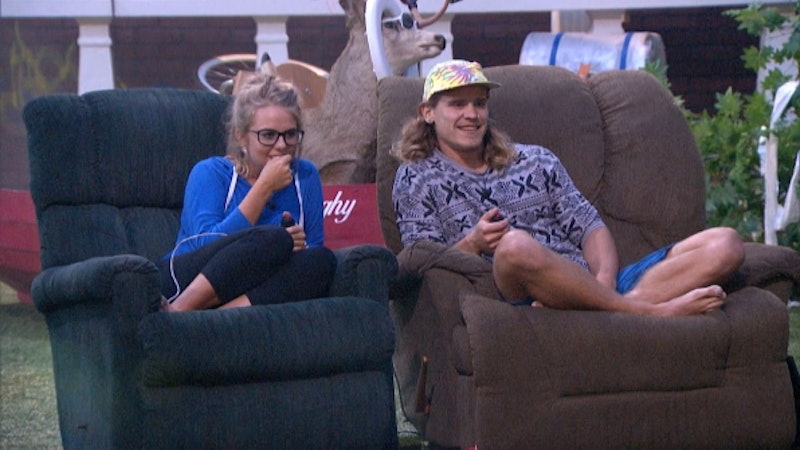 In case you haven't heard, Hayden Voss and Nicole Franzel of Big Brother have finally, finally kissed. The two have been adorkably flirting for weeks now, culminating in the first kiss of the season and the solidification of the world's second greatest showmance. (Sorry, guys, but Zach and Frankie will always be the best.) Still, if there's anything we learned from the misogynistic saga of Caleb and Amber, it's that being connected to any kind of showmance can put a huge target on your back in the eyes of the other house guests. Amber didn't even need to return Caleb's stalkery affections for the other house guests to start strategizing around her in terms of Caleb. Have Hayden and Nicole made themselves targets by finally consummating their love (so to speak)?

At the moment, neither Hayden nor Nicole are huge targets for the other house guests. Of the four girls that were placed on the block in this week's sexist nomination ceremony, Nicole was not among them. Even better, Nicole's best friend in the house, Christine, has been drawn into the alliance left over from the Bomb Squad, now renamed the Detonators. That spells good news for both Nicole and Hayden, who have a side alliance of their own with Christine. It's unclear at the moment which alliance Christine considers herself most loyal to, but she and Nicole have given each other no reason to distrust one another yet and Christine might very well go to bat for Nicole or Hayden just like Derrick did for Zach back when Devin was still a thing.

However, letting the other guests find out just how far their relationship has progressed is definitely going to affect Nicole and Hayden's games. If the house starts conspiring to put Hayden on the block, then they're going to leave Nicole out of their scheming or outright try and manipulate her because they know how close she and Hayden are and they know that Hayden would do anything for her. Along that same vein, the other house guests could use Hayden's feelings for Nicole to manipulate him, similar to how Derrick convinced Caleb to put himself up for nomination to save Amber. I doubt that Nicole would go for the idea any more than Amber did, but their reasons for not wanting that kind of sacrifice on their conscience would be completely different.

The fact of the matter is, having a showmance in the Big Brother house at all is incredibly risky. Every week, there's a chance that Nicole might go home or that Hayden might go home. They're in the casual flirting stage now, but if it reaches a point where the two of them start taking bigger and bigger risks to protect one another then the targets on their backs are just going to get larger. Not to mention if they have to strategize around each other, then things between them could quickly go sour. Could Hayden and Nicole survive one putting the other up on the block, no matter how necessary it seems? Could they survive hearing rumors from the other house guests of one backstabbing the other?

Their relationship is still too new to tell, but the only thing we know for certain is that their dynamic is definitely going to change once the other house guests find out that they've been locking lips. Even just being in the hammock cuddling got them locked out of the meeting that established the Detonator alliance, so already their showmance is working to their detriment. However, they're just so darn cute that it might just be worth it for a few weeks of happiness.

After all, the house guests spend most of their time in constant states of stress and mistrust as they play the game they were brought to the Big Brother house to play. Hayden and Nicole seem to have a genuine connection that's more real than most of the other friendships and relationships in the house. It might not last beyond when one of them gets evicted, but it's fun and easy and less stressful than throwing each other under the bus all the time and scheming with every house guest who comes their way. Sure, their relationship might put a target on their backs, but at least we know that they'll work together to stay safe for as long as possible.