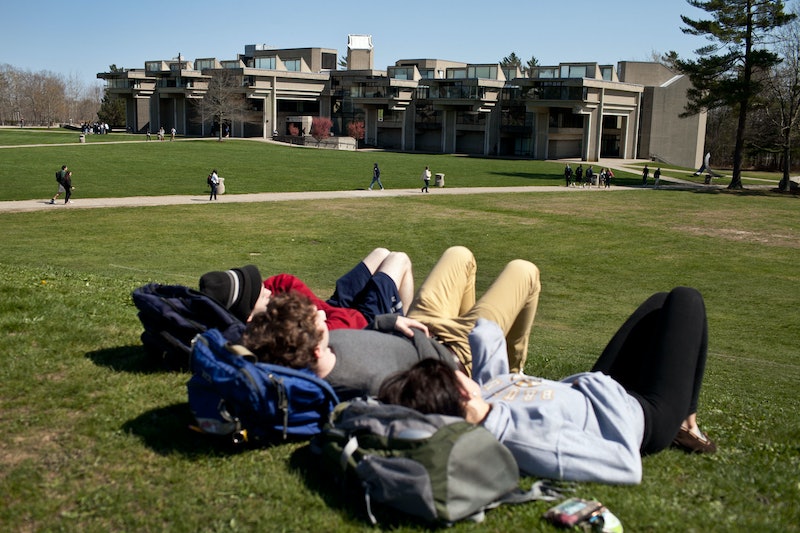 There will always be people who loved college; people who claim that those were the best years of their lives. That's great for them, but I will never be one of those people. And I'm totally okay with that.

Those folks — with their perfect skin, "going out" clothes, and more Facebook photos than I ever could dream of — seemed to me during my college years to be the epitome of all things cool. I, on the other hand, relished in how uncool I was. I basked in my desire to sit in my sweatpants, drinking wine out of a box with my friends.

In college, I felt the pressure to assimilate into some culture. Whether it was in a class, in my major, or in a Facebook photo album, I never quite felt as though I could fit in.

I wasn't a girl who went to frat parties — I learned that lesson the hard way my freshman year, when I drank the Blue Stuff. (If you can stomach the Blue Stuff without turning into Princess Vomit, hooking up with your next door neighbor, or losing your dorm key, then I applaud you. I, however, could not.) By sophomore year, I was content being me, but it sure wasn't a rollicking good time worthy of a teen movie.

As college progressed, I frequently asked myself if the whole situation was going to get better. When I wasn't busy pining for gay boys, desperately trying to win the heart of a no-good-for-me ex boyfriend, or contemplating rhinoplasty (I quote from my Live Journal: "You know, I'm not the first person in the world to have a deviated septum"), I was constantly asking the gods of the Internet why college wasn't ... better. Weren't these supposed to be the best years of my life? Why did I only feel understood by Alanis Morissette cerca 1995?

Sure, I did end up with some great memories. I remember the time I turned a spare room in my apartment into a beer pong room. I remember the time I played Audrey in Little Shop of Horrors. I remember a lot of Franzia wine. I remember being proud of writing an English honors thesis, and leaping through the quad as though I was a flower child in the musical Hair when I turned it in. Yes, they were good years, but they certainly weren't the best years of my life.

And I'm sure as hell glad they weren't. I mean, if everything is downhill after 22, then that's sort of grim, don't you think?

In college, I felt the pressure to assimilate into some culture. Whether it was in a class, in my major, or in a Facebook photo album, I never quite felt as though I could fit in. (I mean, c'mon, I spoke to my Live Journal like it was an all-knowing wizard, when I was really just pouring out my heart into the cavernous world of the Internet in 2007.) I wasn't exactly comfortable with myself, and I felt the pressure — even if I was rejecting it — to fit in on campus.

When I graduated college, that pressure stopped. And I owe a lot of it to three things.

The first was moving to New York City. I'm not saying you need to move to New York City, but let me tell you, the feeling of moving out of your parents' house and attempting to get on your own two feet is the most empowering feeling I've ever had. It was more empowering than living in a dorm out of my parents' sight. Because this time, the mistakes were mine, without a community of witnesses. The sense of anonymity was liberating.

The second thing that vastly improved my life was improv comedy. Through improv comedy, I met tons of people who were incredibly supportive and fun; people who have pushed me to do work that I wouldn't have done in college. I had a hobby — something I did, just for myself, that was not a class I was required to take. And I finally had my community.

The third thing was — and this might sound really weird at first — online dating. In college, not only was I convinced that I would die alone, but I wasn't the best at taking risks. Online dating changed that nice and quick.

By simply trusting myself, taking risks, and going on dates post-grad, I started getting comfortable with the idea that, yes, there are human beings that want to imbibe a drink with me — and I don't even have to be grateful to them. In other words, I developed standards, and through a series of events that probably sound like a rerun of Girls, I inversely discovered that I wouldn't say yes to anything — or anyone — I didn't truly want. I was in charge of my own happiness.

Of course, there are times that adulthood is hard. Bills suck. Dating can be hard. Laundry is actually a thing you have to do. Finding a job you like and that pays enough can be grueling. But real life is liberating because it's exactly that — it's real. Yes, life after college is scary. But it's certainly a lot less frightening than what happens when you drink the Blue Stuff.