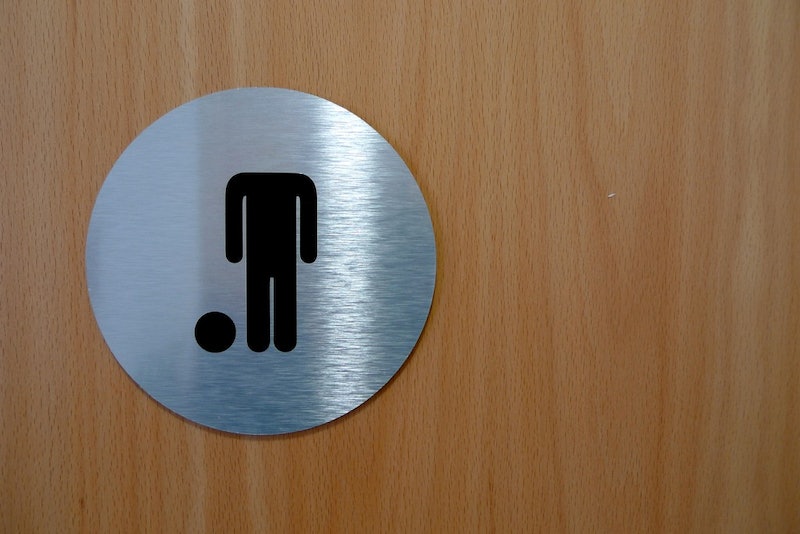 You know how it goes: You’re at a hip and trendy new restaurant, bar, or club. The call of nature arrives, so, heeding it (like any responsible person would), you politely excuse yourself and make your way towards the restrooms. When you arrive, though, you find yourself presented with two doors… and two baffling symbols. Although you surmise that the symbols are meant to indicate which door leads to the men’s room and which one leads to the women’s, they appear, in and of themselves, completely meaningless. So… what now? Ugh, you think. Trendy bathrooms are the worst.

But don’t worry. College Humor feels your pain; as such, they’ve cooked up a hilarious new short that shows us we’re not alone in our confusion. If you’ve ever sat there for 10 minutes in increasing discomfort trying to figure out exactly which door you’re meant to go through… this one’s for you.

Of course, the solution to the whole probably is quite simple: Do away with gendered bathrooms in the first place. Just think how many problems would be solved if all restrooms were gender neutral: No one would ever have to worry about violating some weird, completely artificial social convention again! How’s that for an idea?

So, y’know, the next time you find yourself in a situation like any of the ones detailed below, now you know what to do: Just charge in. If you’re wrong, screw it. Who cares? Bathroom signs are dumb anyway.

I appreciate that this KFC location left no ambiguity… but I don’t particularly enjoy being compared to the item I’m eating when I make a trip to the loo. That’s just weird.

According to this image’s description, it’s a gender neutral bathroom. I appreciate that fact, but again — what’s with the food analogies? Can we not just put easy-to-understand symbols with a plus sign or something to indicate inclusiveness?

I’m not going in there! If this sign is to be believed, people get decapitated in there!

Only members of ABBA are allowed to use this restroom.

And you can only use this one if you do a handstand while you’re going. P.S. Like the pizza one, this sign allegedly indicates a gender neutral bathroom. I fail to see how “peeing upside down” equals gender neutral, but maybe that’s just me.

In the future, we will all look the same. Also, we will only have one spiky, triangular leg each.

Let’s just all agree that if we’re only going to obey one bathroom-related social convention, it’s refraining from peeking over the divide at people in cubicles. That’s just rude, right?

…I don’t even know what to do with this one. Ugh. I give up.