If you want a brilliant literary tattoo, you're not alone — it's a trend (a really cool trend) that many have ventured to do. But if you've got needle-to-skin trepidation, you're not alone there, either. Luckily, thanks to a new Kickstarter campaign by Danny Fein of Litographs called “Litograph Tattoos: Wearable Tributes to Iconic Books,” you may have found your plan B.

The Kickstarter aims to create and distribute an impressive collection of temporary tattoos designed with iconic quotes from 15 literary classics, including Pride and Prejudice, Ulysses, Peter Pan, and The Adventures of Huckleberry Finn, and more. Their stunning designs further prove our theory that temporary tattoos can look just a cool as the real thing.

Aside from the initial gorgeous (and impressively realistic) collection of 15, the project, if successfully funded, will also launch a single collection of 2,500 temporary tattoos created from the lines of Lewis Caroll’s Alice’s Adventures in Wonderland, which together will make up an entire reprinting of the text. Each project backer, while supplies last, will receive one of the 2,500 tattoos and become a part of what Litographs is calling “the world’s longest tattoo chain,” a republishing of the magical work on the bodies of its fans, one tattooed sentence at a time. Wearers will be asked to photograph their new skin accessories and post the images in a gallery on the Litograph website. (Did you just say "cool" aloud? Because cool.)

“There are books I love so much they feel like a part of myself. Litographs’ tattoo project will let us experiment with this compulsion,” Amanda Bullock of Housing Works Books says on the project’s Kickstarter page. “I don’t doubt some people will choose to ink their sentence for real.”

For only $1, backers can receive their own unique Alice tattoo, and for only $30 they can also have the full collection of 15 iconic quotes. The campaign ends August 21 and the tatts will be printed in September and distributed in November, so lit-lovers who want to try on these temporary inkings should hurry over to the site and pledge today. Follow Litographs “down the rabbit hole” as the site encourages.

And, in case you're wondering, Meredith and I have already ordered ours. 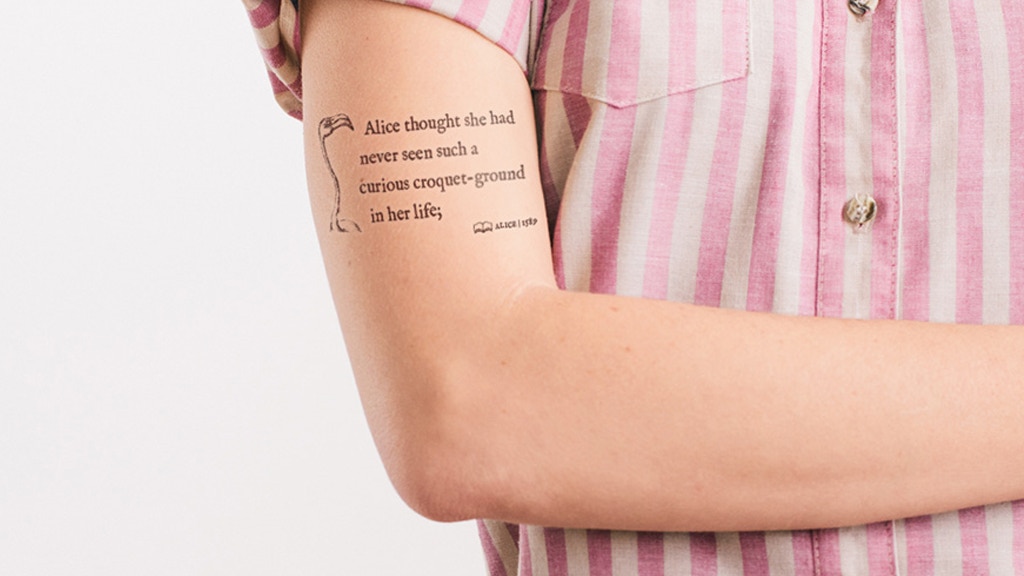