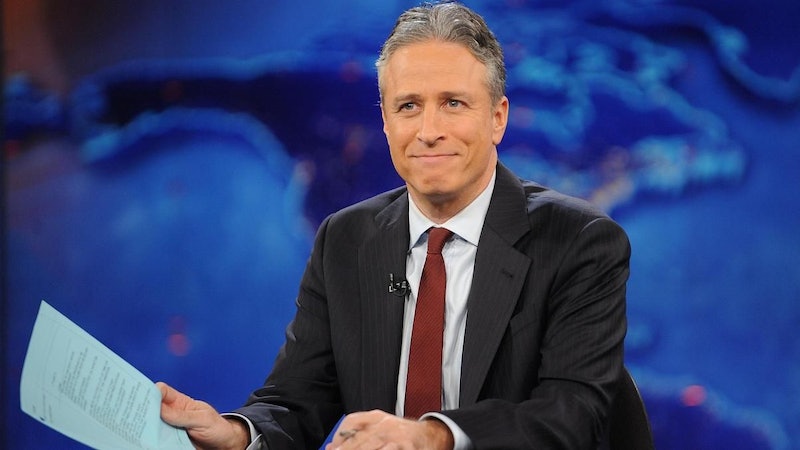 On Monday, Jon Stewart aired a brilliant Daily Show sketch about the way Jewish people who criticize Israel’s policies are dismissed as self-loathing. As a (slightly less established) comedian who has been labeled as a self-loathing Jew myself, I was especially grateful and excited to see the sketch. But I was even more excited because it reminded me of a conversation I had with Jon a few years ago.

OK, so it wasn’t exactly a conversation. That implies that we’re friends (which, Jon, if you’re reading this, I’d really love to be). No, the "conversation" Jon and I had was actually more of an exchange in a Q & A preceding a live taping of The Daily Show.

I asked Jon the question in the first place because I myself have had the honor of being labeled a self-loathing Jew for daring to criticize Israel's military actions in my comedy.

But, like so many a Jew, I digress. Back to the question at hand: During the pre-show Q & A, I asked Stewart if he was ever called a self-loathing Jew and, if so, how he responded to it. Before I asked the question, I already knew half the answer. After all, Stewart has made many valid, reasonable, intelligent, (and funny) criticisms of Israel’s most hawkish and draconian policies. And when you criticize Israel and you're Jewish, you inevitably get called self-loathing. (If you do anything like that and you’re not Jewish, you get called anti-Semitic. So, it could be worse?)

"When people call you a self-loathing Jew it says more about them than it does about you," Stewart replied to my question. He then added, referring to being criticized for changing his given name, Jonathan Stuart Leibowitz, "Sometimes Leibowitz sounds ridiculous. Sometimes it rhymes with Leibo-tits."

As it turns out, Stewart is still being called a self-loathing Jew. Just look at Monday’s sketch — and how people responded to it.

In the sketch, Stewart begins by saying, “We’ll start tonight in the Middle East where Israel — ” and is interrupted by a screaming group of people (played by his correspondents) who appear from under his desk and yell things like, “What — Israel isn’t supposed to defend itself?” and denounce him as a “self hating-Jew.”

Stewart tries to speak once more, saying, “ Look, obviously there are many strong opinions on this issue but just merely mentioning Israel or questioning in any way the effectiveness or humanity of Israel’s policies is not the same thing as being pro Hamas—” and is interrupted by comments like, "So you are against murdered children?" and "Zionist pig."

So, how did Jon Stewart's critics respond? By doing exactly what the sketch indicts them for doing. Which — as Stewart told me — reveals more about them than it does about him.

In all fairness, Stewart had a sneak preview of how his critics would react, given that he's frequently accused of criticizing Israel because he hates himself. Conservative radio host Mark Levin, for example, offered this nuanced critique of Stewa rt: “Jon Stewart has about 30 writers and is a knee-jerk idiot. ... I despise the self-haters, I really do. I despise them. ... [ I don't] “trust Jews who change their names.”

The response to the self-loathing skit was much of the same. "Jon Stewart doesn’t like Jews, Judaism or Israel," journalist Daniel Greenfield wrote in the Right-wing FrontPageMag. "And that’s his problem. Our problem is that far too many Jews have so little pride in their own culture that they build their shaky identity around liking a bad TV actor."

For further evidence of Stewart's Jewish-self-hatred, Greenfield points to — you guessed it — the comedian's name. "Stewart could have long ago gone back to being Jon Leibowitz. There would be no hit to his career which consists of sneering into a television camera every day. But it’s clearly not a name he likes, because it’s a Jewish last name."

Looks like Jon's response to my question a few years ago anticipated exactly what his critics would say.

But given how much the conflict in Israel is escalating, it's more important than ever for Jews to take on the issue. As Bustle's Seth Millstein put it,

When you’re a Jew who thinks the situation is complicated, to say the least, it’s uncomfortable — and circuitously enough, bonding with other Jews about this specific type of discomfort has actually been an integral part of my own Jewish experience.

What matters is that we keep engaging with these questions as young American Jews, no matter how difficult they may be to answer. We have to do our best to balance our sense of Jewish identity with a level-headed assessment of the political situation, and recognize that those two aren’t mutually exclusive, even if they do lead to very conflicting emotions. After all, I’m pretty sure that’s what being Jewish is all about. What’s that old joke again? You get two Jews in a room, you have three opinions.

Part of the reason I asked Jon (as I like to call him, because we're so close) my question in the first place is because I myself have had the honor of being labeled a self-loathing Jew for daring to criticize Israel's military actions in my comedy.

For fear of the self-hating Jew slur and courting controversy, I didn't always want to talk about Israel. For a while, I avoided the issue altogether because it was so charged and divisive. But I soon realized that not only was not addressing the conflict cowardly — it also wasn't actually good for Israel. Built into the premise of the self-loathing Jew is the idea that hawkish policies are always in the best interest of Israeli Jews and, by extension, Jews world-round. But that's as untrue as saying that Americans who prefer diplomatic approaches over military ones are self-loathing Anti-Americans who don't have America's best interest at heart.

Once I started joking about Israel in my routines, people would, without fail, wait to talk to me after the show so they could tell me how great my set was ... except for the part about the Israeli-Palestinian conflict, which I didn't understand or got all wrong. Over time, however, this criticism has actually decreased and been replaced by equally helpful unsolicited feedback: One woman complained to the producer of the show that I had lied by implying that Jewish women were easy. So ... progress?

The subject, however, continues to be divisive, and criticism of Israel is still equated with self-loathing. I encounter this when I perform, when I write, and when I simply speak my mind in real life. Which is exactly why Jon Stewart's sketch meant so much to me: How better to take back a slur meant to quiet criticism then to turn it into a joke?

So congratulations, Jon — or should I say, Mazel tov, Jonathan Leibo-tits. Thanks for showing the world what an empathetic, non-self-hating Jew really looks like. In a world of shandehs, you really are a mensch.