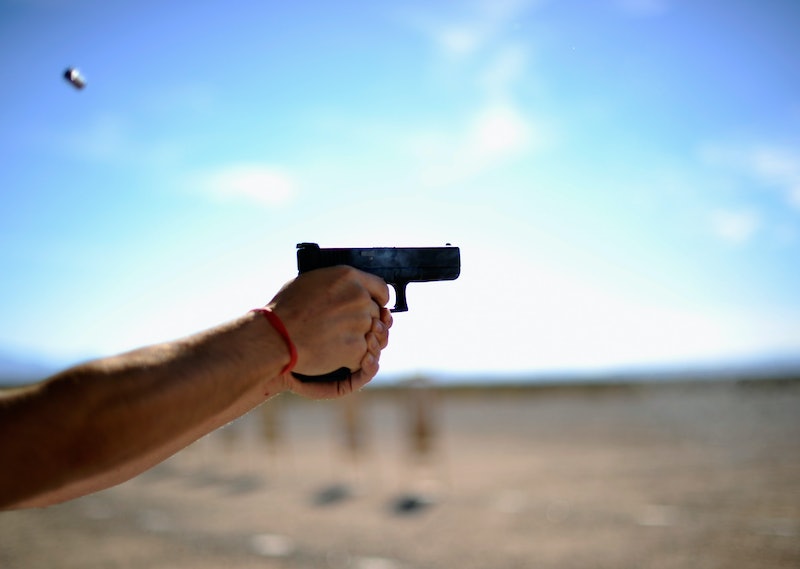 Following the botched lethal injection of Oklahoma prisoner Clayton Lockett, capital punishment in the U.S. saw a new wave of activism this year. But not everybody is calling to abolish the death penalty — just the now-controversial lethal injection, which has a long and troubled history. And for U.S. Judge Alex Kozinski, it's time for the firing squad to make its comeback.

Death row inmate Joseph Wood, whose execution is scheduled for Wednesday evening, was granted a stay of execution by the Ninth Circuit Court last Saturday. Wood appealed to the court, saying he had a right to be told which drugs were being used in the lethal injection under the First Amendment. Similar requests have been made by a number of death row prisoners this year following the painful, drawn-out death of Lockett, including Macus Wellons, a late Georgia man who was the first person to be executed in the United States since Lockett.

Although the Ninth Circuit agreed with Wood, the U.S. Supreme Court didn't: On Tuesday, the Supreme Court gave the go-ahead for Wood's execution. Judge Kozinski, who currently serves as the chief justice of the Ninth Circuit, didn't doubt that the high court would stay Wood's execution. He did, however, believe that this was a good time to place America's primary form of execution under scrutiny and question its integrity. How did we get to the point, he asked, when lethal injection has become a menace rather than the solution?

Writing in his dissenting opinion for the court, Kozinski laid out America's path from the electric chair, gas chambers and firing squads to the lethal injection: Using an injection was seen as more "serene" and overall improved way to carry out an execution. However, Kozinski is doubtful that that's now the case.

Whatever the hopes and reasons for the switch to drugs, they proved to be misguided. Subverting medicines meant to heal the human body to the opposite purpose was an enterprise doomed to failure. Today’s case is only the latest in an unending effort to undermine and discredit this method of carrying out lawful executions. ... Whatever happens to Wood, the attacks will not stop and for a simple reason: The enterprise is flawed. Using drugs meant for individuals with medical needs to carry out executions is a misguided effort to mask the brutality of executions by making them look serene and peaceful—like something any one of us might experience in our final moments.

He goes on to say that executions aren't ever going to be painless. In fact, they are actually "brutal" and "savage" events. "If we as a society want to carry out executions, we should be willing to face the fact that the state is committing a horrendous brutality on our behalf," Kozinski writes.

Kozinski's solution isn't to abolish the death penalty altogether. It's to bring back firing squads.

Bringing Back Execution By Firing Squad

"The firing squad strikes me as the most promising," Kozinski writes. It's cost-effective, causes "massive damage" and certain death every time, and there's already government employees and tools to carry it out, he argues.

Kozinski's idea may not be as esoteric as it sounds. In fact, there have been several lawmakers this year proposing the reinstatement of firing squads. Utah Representative Paul Ray plans to introduce a bill allowing firing-squad executions during the 2015 legislative session, arguing that it's "probably the most humane way to kill somebody." (Utah had firing squads as an execution option on its book until 2004, when it was repealed, though people who were convicted before then still have the option.)

Kozinski's Not The First To Suggest It

Lawmakers in Missouri and Wyoming also tried to pass bills this year legalizing the use of firing squads, but both measures have stalled in the state legislatures. "A firing squad would be quick and something we could do at a moment’s notice," Missouri Representative Rick Brattin told the St. Louis Post-Dispatch in January.

Meanwhile, a study from the early 1990s that looked at various methods of execution found that execution by firing squad is perhaps the least painful method — if the shooters don't miss. But given that firing squads are rarely botched, it's doubtful they would.

Some studies have even pointed out that death by firing squad — which usually involves placing a target on the prisoner's heart — takes less time to die than lethal injection. Going back all the way to 1938, an experiment then found that a Utah inmate, who allowed an electrocardiogram to be hooked to his body during his execution, had complete heart death within one minute of being shot. By comparison, a medical study from 2002 concluded that death by lethal injection takes around eight minutes, if the execution isn't botched.

Perhaps the biggest reason for bringing back the firing squad wouldn't be painlessness — it'd be that lethal injection is just getting too dangerous in the U.S.. The American prison industry has faced a drug shortage of late, due to pharmaceutical companies pulling out because of increased media and activist pressure. Without the long-held, go-to companies, many states had to scramble and find other alternatives — including untested drug cocktails, like the one given to Clayton Lockett by the state of Oklahoma last April.

Of course, America could always just abolish the death penalty — at the very least, until the drug shortage and experimental cocktails are figured out. But as Kozinski says, if states do insist on executing its citizens, then maybe it's time to "stop masking it."