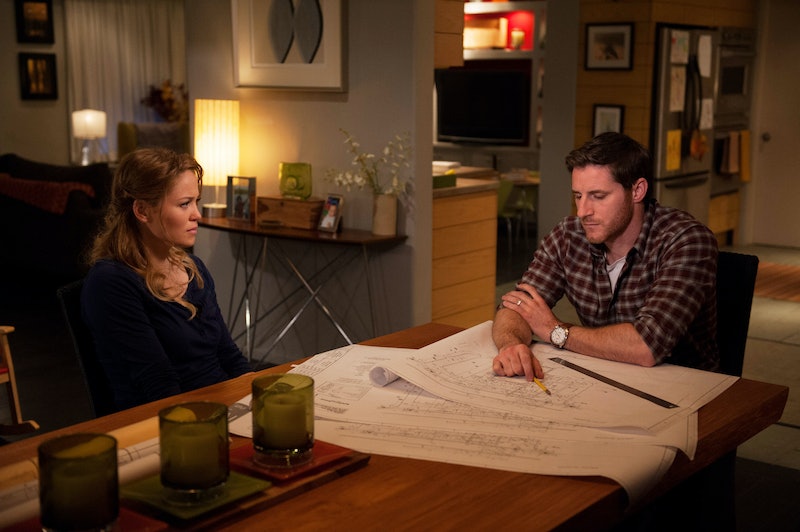 I have to give Parenthood some credit: even with only 12 episodes left of the series, it's not going out without a bang. Last week, we learned that the show's final season will revolve around a huge story that influences all of the ensemble, and it wasn't long before fans began brainstorming theories ranging from Kristina's cancer reoccurring to the death of a Braverman. Just one big drama, though, apparently isn't enough; on Tuesday, it was revealed that Parenthood 's sixth season premiere will feature a character named Chris, the ex-boyfriend of Julia and the likely source of even more trouble for an already-struggling couple.

According to TVLine, the show's Sept. 25 premiere will introduce Julia's law school ex-boyfriend as a co-worker at her new job. No other details were provided, but it doesn't take a big stretch of the imagination to figure out that no matter what this guy's intentions are, he's bound to cause some tension in Julia and Joel's marriage. And, as all Parenthood fans know, the last thing the couple needs is more drama; nearly all of last season was devoted to their marital issues, from cheating to trust to differing views on raising their kids. The finale had them edging slowly towards reconciliation, but if Julia's ex-boyfriend comes into the picture, I can't imagine any happiness between them is going to last very long.

Still, I have enough faith in the Parenthood writers to think they're not introducing Chris solely as another obstacle for Julia and Joel's marriage. The show's spent many episodes dealing with the temptations and repercussions of cheating, and to make the couple face yet another wandering eye situation would be repetitive and unnecessary. That said, though, I'm not sure what Chris could be doing on the show other than breaking up Julia and Joel's marriage; even if no cheating occurs, his presence at such a precarious time in their lives isn't exactly going to be cause for celebration. No matter what the writers have in store for Chris, it's unlikely to mean anything but trouble.

There is one upside to all this, though; Chris is getting introduced in an episode entitled "Vegas," so even if he does bring some drama, it'll be softened by the (likely) sight of Adam rocking his "cool guy" shades and Crosby getting kicked out of a casino. Sure, there's no confirmation that the whole family is, indeed, going to Las Vegas, but I highly doubt the writers would miss an opportunity to show the hilarity that is the Bravermans gone wild.